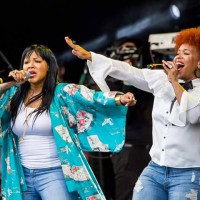 As their recent storming performances at the Big Church Day Out (both North and South) demonstrated, Mary Mary have lost none of their exhilarating soul power and their ability to communicate a no-holds-barred Gospel message. With the fifth series of their much watched
reality TV show going strong the sisters from Inglewood, California remain at the pinnacle of the urban gospel scene, along with Kirk Franklin. The one thing though that their countless fans would like from Mary Mary is a new release (the compilation 'Go Get It' released in 2012 was their last album) which, when it comes, will no doubt add significantly to the eight million album sales they have so far enjoyed. One song likely to be on their new album will be "Farewell" which the sisters recently premiered at a live performance in Israel. They spoke to Cross Rhythms about the song.

Tony: Tell me about the new song.

Tina: It's called "Farewell". Basically it's saying goodbye to every issue, every care, every concern - just bidding them goodbye!

Erica: I think that's what we have to do, we have to just escort them out, all the issues and cares and concerns, because they can sit with you, you can think about them and wonder, and ponder. But I'd rather ask the problems to leave, and welcome the presence and power of God, his healing, and every other thing that I need - peace and contentment and grace and mercy and favour and all the things that God promised to us. But we do have to come out of agreement with the negative thoughts and negative feelings and all the things that we have dealt with: we know it's real, but it doesn't have to stay a reality.

Tina: There's two different things you're dealing with: you're dealing with the reality and you're dealing with the truth. The reality is an everchanging circumstance. The truth is that God said he is with you, the truth is that everything will work out for your good, the truth is that what the Devil means for evil, God can turn it around for good. The truth is that I have hope, the truth is that all things are possible if I can believe. So we have learned over all of our years of being Mary Mary, the other perspective of worrying, breaking under pressure, letting your emotions get the best of you always sent us into a frenzy, and sometimes things work out. So you wasted all your energy with hopelessness and despair and worry for nothing! So we just choose not to give our energy to that anymore - that's not to say that things don't challenge us and sometimes get under our skin, but we've understood, fully and completely, at this point in time in our lives and in our career and in our ministry that God is with us and things are going to work out, and if doesn't work out, we're going to learn from it and go through it, and get through it.

Tony: Sometimes when I speak to people about my faith and speak about some of the issues you've just raised they say, "Well it can't be that simple."

Tina: They want it to be so complicated, and it's really not! But that's the trick of the enemy, the Bible calls him "a deceiver" and "a liar" and "an accuser", so you know you have to go through all this rigmarole and all these hoops and loops, and you have to jump and twirl. Or you can stand right where you are and say, "Lord, I surrender, and I surrender all my issues, and I receive all that you are." It is just that simple, and they don't realise it. We'll keep singing and we'll keep telling people, we try to do it in our music, in our conversation, to just try and let people know that God is waiting on you actually. God never changes, we change, we change with our age, we change with our circumstances, we change with our finances, we change with our new neighbourhood, new career. God never changes. He's constant, he's always there, and the problem is we try and solve everything ourselves. We don't surrender to his greatness and to his sovereignty and allow him to work things out through us, we're so busy trying to figure it out thinking 'all I have is me'.

Erica: And then people live in condemnation and don't believe that they deserve it: a lot of people that I encounter, they don't think they deserve it because of what they've done, the thoughts that have gone through their mind: "there's no way he could love a person like me." They ask, "Are you sure? Don't I have to do something for him?" No! He loves you just as you are. His love transforms, changes and does everything that you need it to do, so a lot of the time it's convincing people that they're worthy of the love of God, worthy of the love of Jesus. 2: The Bible says that we're saved "by grace, not of works lest any man should boast" so if people's work could qualify them for the blessings of God, imagine how many people would give themselves the credit? It's so important for people to understand that you absolutely are not worthy, and if it was human, we would probably just throw you away, let's just be honest, but because you have a God who loves you, because you are his masterpiece, you are his creation, he never throws you away. He always understands, and he's always there when you're willing to turn back to him. So we think it's important for us to not just sing it, but live it. Live it through the crisis, live it through the high times, live it through your challenges so that people can not only hear what you're singing, but can see that you're living that way, and that works, and I think I want to consider that. You know our lives should be a testament of God's truth, of God's greatness. And you know, you can sing your song and then go backstage and do something completely contrary, and whoever you won, you just lost them. So it's important that not only do we sing it, but we live it every day.

Thank you for the words of encouragement. To know God is Love, Joy, Understanding and more. Trials do come and go but like you said and I have learned that it is a process that we go through. The only difference with the process is that we must not sit in it we must work through it. God see all & the outcome we just have to endure the storm and walk into the blessing. The victory is already WON! Reaping our reward is a Gift from God. We are an instrument of Praise. Thank you Mrs. Tina and Mrs. Erica whether we have Mary Mary every now and then we still have Mrs. Tina & Mrs. Erica getting the message out in there Unique ways. Thank you! May God continue to be a blessing to you and your family.