Matt Hammitt: The Sanctus Real man sings about his son born with half a heart 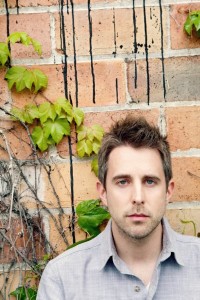 Over the years the voice of Matt Hammitt has become one of the most recognisable in Christian rock. The band he fronts, Ohio's Sanctus Real, have become Christian charts regulars and their last album, 'Pieces Of A Real Heart', is their best seller so far. As it turned out, 'Pieces Of A Real Heart' carried something of the prophetic about it. The bridge lyric to one of the album's outstanding songs "The Redeemer" went, "I don't have every answer in life/But I'm trusting you one day at a time/'Cause you can make a weak heart stay alive forever." He said, "Those lyrics, along with songs like 'Keep My Heart Alive', 'Dear Heart' and then the album with a broken heart on the cover, came out on March 9 of 2010."

One month later, on April 12, 2010, Matt and his wife, Sarah, took their four-year-old daughter with them to a doctor's appointment where they were looking forward to an ultrasound that would reveal if she would be getting a baby brother or sister. "We found out it was a boy and we were all celebrating," Matt recalls, "but the ultrasound tech isn't allowed to tell you if something is wrong, so the doctor came in and told our family that things weren't right, that half of his heart wasn't developed. It was pretty grim news. They didn't even think he would survive."

Diagnosed with Hypoplastic Left Heart Syndrome, little Bowen, whose name means "small victorious one," defied the odds and survived, but it hasn't been an easy road for Matt and his family. "When we found out that Bowen was going to be born with half a heart, it started stirring up a lot of questions in me," Matt admits. "I know there are some mysteries and questions that aren't even meant for our minds to comprehend, but I just really started praying more, reading more and honestly seeking God for comfort in that time - and for as many answers as I could get. I started expressing all my questions, emotions and feelings through song almost right away. 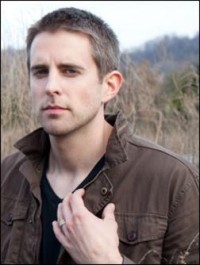 "I will never forget the night of his first open heart surgery - we got a call in the middle of the night that Bowen's heart had stopped beating," says Hammitt on a SanctusReal.com video blog encouraging people to share their stories of redemptions. "The redemption that was for me, in probably this most broken time of my life, was that all the treasure in this world, everything I put my hope in here in this life, was burned away in that moment. I could clearly see that the only real treasure I have is the hope that I have in Jesus Christ. Bowen's doing great now, he's making an incredible recovery and the fact that we still have him; we thank God for that every day. We're eager to see what God continues to do through his life."

Born out of the heart of a father, wrestling with his pain, but buoyed by his faith and love for his family, Hammitt began writing songs from the deepest recesses of his soul. These songs are now set to be released in his first solo album, 'Every Falling Tear'. "Let It Bring You Praise" is a beautiful worship song. "Let Go" and "Holding You" are songs about surrender. The latter tune reminds the listener, "It's not in what you hold on to/It's in the one who's holding you tonight."

"'All Of Me' was probably the hardest to write. At that point I didn't know what was going to happen. Bowen wasn't born yet," he says of writing the tune with Bernie Herms. "It's about recklessly loving in spite of our fears, even if it means we're going to bleed or we're going to be broken."

"Trust" is a song that captures this whirlwind of emotion. "I was struggling to believe that any good could come from that painful moment when I handed my son over for that first surgery." Matt remembers thinking: "'If things don't work out the way that I pray they are going to work out, no matter what we go through, I still know and trust that God is faithful.' That was really the cry of my heart - to be so invested in the truth that my emotions don't steal me away from standing on the truth that he's faithful. 'I will trust you Lord with all my heart and I won't forget how good you are.' I just think that was pretty much the guttural cry of my heart throughout that whole time on September 13th." 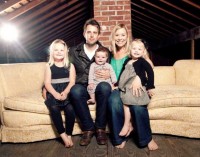 Matt co-wrote "Trust", along with "You Are My Treasure", "This Is Grace" and "Let It Bring You Praise", with friend and frequent collaborator Jason Ingram. He and Joy Williams of the Civil Wars co-wrote "Let Go" and Matt co-wrote "Without You" with popular singer/songwriter Audrey Assad.

Matt has already been sharing this new music with others going through difficult circumstances, including Russell, who has been awaiting a heart transplant. "He told me that those songs had meant a lot to him and that they were comforting to him," says Matt, who understands first hand the power music can have to soothe and encourage. Matt and his family felt it that terrible day they left the doctor's office after first hearing news of Bowen's condition. "We tried to turn a CD on and - this actually never happened to us before - our CD player wouldn't work. The CD kept spinning and skipping, so we turned off the CD player and turned on the radio. Right as we turned it on, the first song that we heard on the KLOVE Christian radio network was 'Hold My Heart' by Tenth Avenue North. That was a huge comfort to us. If you listen to that song, you'd be blown away by the lyrics and how it pertained to us that day."

Hearing that song at that moment not only provided comfort, but also somewhat of an epiphany. "We've always heard the stories about how our songs affect people, and that day, I was on the other side at the moment that I needed it," says Matt. "This is what inspired me to begin writing more music out of this circumstance."

"A lot of what we went through with Bowen was really hard on my wife and I emotionally, and I felt and understood the pain of others going through similar circumstances as us. We also met families at the hospital [C S Mott Children's Hospital in Ann Arbor, Michigan] whose children had either just died or were on the verge of dying, and it felt like they were losing hope. One of the main reasons for recording these songs was to go back to the hospital and hand out the music to help lift these families out of despair."

Having already recorded and handed out demos of songs in the hospital, Hammitt also sang "All Of Me" on the much watched ABC World News. The studio recording of this song is now available through digital retailers iTunes and Amazon.com. "All Of Me" is the first of four tracks from 'Every Falling Tear' to be released each month leading up to the full album release in September.

A portion of the proceeds from the sale of 'Every Falling Tear' and its singles will go to benefit the Whole Hearts Foundation, a new foundation Hammitt has set up to help families going through similar challenges as himself. Providing assistance for families of children affected by congenital heart defects, additional details on the foundation will be announced soon.

The knowledge and the experiences of the past year have paradoxically strengthened Matt's faith and given him a zeal for all of life. "The biggest change in my life is just my ability now to be grateful for every day that God has given us," he says. "All of those experiences kind of burnt away my reliance on anything but Christ. I no longer put my faith in what I see here, but in what's to come. If things don't go well for us in this life, if we lose Bowen. . .if we don't have Christ or the hope of what's to come, then it's a sad story. If we have that hope of what's to come, it's not so sad at all, it's actually really incredible."

My daughter has HLHS (half a heart) and was born at the University of Michigan in Ann Arbor. She has had 2 open heart surgeries, one at 2 weeks and one at 5 months. She will be 3 years old on July 17th and i thank God every day for my little girl. I LOVE Sanctus Reals music and am excited to hear about the songs Matt has made for his little man with half a heart. I believe that God chooses special people to care for these little angels that He sends, and though it may be hard i thank God for choosing my family and I. My husband and I also have 5 other children besides out beautiful angel with HLHS. Please feel free to email me at any time. Thank you for sharing.

My son also has HLHS and just had his last surgery last month. God gets all the glory for these little miracles. What a fantastic platform to share his faith and heart awareness.