Matt Maher: Turning grief at the loss of a much loved father into music 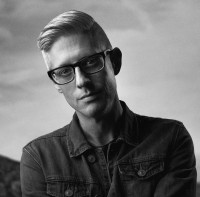 Ever since Canadian singer/songwriter Matt Maher joined the modern worship hierarchy with his classic 2008 song "Your Grace Is Enough" critics have been heaping praise on the songsmith. His latest album 'Echoes' (released in both standard and Deluxe versions) was born out of the death of his father. The review on the Jesus Freak Hideout website commented "intimate emotions sprout throughout most of the songs particularly on the reflective 'Your Love Defends Me' and the sentimental climax to 'Just As I Am'" while Hallels wrote "Maher isn't one that is only horizontally focused on our earthly sufferings. Rather, songs like 'Holy' and 'The Cross Forever Speaks' completely teach us that unless our gaze is vertically fixated on the holy beauty of God as expressed via the cross, our response to suffering will only be a meaningless whine." Matt spoke to me about his most challenging album ever.

Tony: Why two versions of 'Echoes'?

Matt: I went back in the studio and recorded more material. There's a sense of things feeling incomplete. Occasionally albums will feel done, but most of the time I don't know if they'll ever feel fully done.

Tony: Did you have someone breathing down your neck saying you had to deliver the album by a certain date?

Matt: There wasn't that huge amount of pressure. The record label this time around was very understanding - especially given the circumstances of my father passing away. There were a couple times where people said, 'Do you want to take longer? Do you just need to take a break?' But by that point - which was late spring - I kind of knew that I had the songs that were meant for this time. I originally was exploring a lot of different topics, and I think my dad's untimely passing became a laser-pointer. It focused things for me in a very personal, intimate way. It's just asking a very basic question, which is, 'What is the Christian response to suffering in all of its forms? How do you respond to that? How do you demonstrate faith in the midst of that?' Some of the context of it is the world we find ourselves in today.

There's this great quote by CS Lewis I saved on my phone three and a half years ago, where he said, 'We must picture Hell as a state where everybody has a grievance with one another. Everybody is offended, and everybody is deadly serious about the passions of self-importance and envy.' I thought, 'Wow. That is so much the plight of the world we live in today.' If I get cut off by somebody in a car now, I don't know what to do with that emotion because I'm aware of the fact that an earthquake has just killed 250 people in Mexico. Whatever grievance I had going on in my life is really not that important. But at the same time you still have to do something with those emotions. You have to lay them down, surrender them to the foot of the cross. We are definitely living in a very interesting time.

Tony: Steven Curtis Chapman says in his book that he found healing in songwriting. Have you found that in your life?

Matt: Yes. I would echo his sentiments. So many of the songs on this album were written before the grieving process for my father. It's almost as if the Holy Spirit was prompting me to write songs I needed to hear nine months on. That being said, a couple of the songs I wrote after the fact helped somewhat with the grieving process. One song in particular - one of the last we recorded, a song called "Just As I Am" - was written the day my dad went into the hospital, and I forgot about it. I'd been writing songs with a group of people. Ed Cash and Mia Fieldes and myself finished it, but we didn't really have a recording of it. That night, my dad went to the hospital and I went on the road, and two days later I was in Nashville, by that point on the phone with doctors in Canada and they were saying, 'You need to make arrangements to come back. We don't know if your dad's going to make it to the weekend.' I just sort of forgot about that song, then I ran into Ed in June. I saw him at a dinner, across the room, and was instantly reminded. 'Wait a second. We wrote a song together.'

It's inspired by the original hymn, but what Ed didn't know - it's so much the Holy Spirit - is that Charlotte Elliot wrote that hymn in the midst of existential crisis, struggling with doubts and anxieties. Her spiritual mentor at the time suggested she write poetry as a way to soothe her soul, or a way to deal with her emotions. So she did. After one particular night of being awake on the couch, not able to sleep, and getting to the point of going, 'I don't know if any of this stuff called Christianity is real,' she wrote the words to "Just As I Am" as a way to remind her, and to remind her soul, of what's true. A lot of songs on this record were inspired by hymns, but based on my experience it's safe to say that most artists - and I think it's important to the Church to embrace this fundamental connection with artists and art - most artists have to go to the edge of darkness to gain insights that they bring back for everyone else. We live in an age when sentimentality has distorted a lot of the extraneous places in the Christian faith. Someone like Steven Curtis Chapman can lose his daughter and he has to write a book to talk about the fact that his songwriting became a place of catharsis.

But we can paint a picture of Christianity that's so sterile and shallow that when people find themselves going through insurmountable grief they don't know how to reconcile the two. One of the things I've learned looking at the stories behind the hymns that inspired the songs on this record is that a lot of those hymns were born out of suffering and hardship. It's all different kinds. Joseph Scriven who wrote "What A Friend We Have In Jesus" was engaged twice and both times his fiancees died. It's a painful life. "Great Is Your Faithfulness" was written by a guy who sold life insurance. He wanted to be an evangelist, and he tried it for a year but his health forced him back into selling life insurance in New Jersey. But he wrote poems from his desk and one of them was that hymn - which is so amazing. For me, the stories are just as good as the songs, because they continue the story of God interacting with frail human beings that is one of the reasons Christians love the Bible so much. Yes, it's full of his promises, but it's illustrated through the frailty of human life.

Tony: Because some of the songs on a worship album will be sung by a congregation, how personal can a worship song be allowed to become?

Matt: It's a great question. Imagine how King David feels.

Tony: David's psalms often start with complaints, and these days you couldn't put 'God, why is life so rubbish?' at the start of a worship song.

Matt: We would struggle a lot with it. What great art always does is its deeply personal but reveals something that everybody can relate to, and that's what ends up being the shared experience. I'm realising this mistake in my own songwriting. A lot of people think that writing a corporate song is about making sure the melody is singable and the words aren't too hard - it uses 'we' instead of 'I', plural instead of singular. It's what the song ends up saying with all of it, something so compelling that everybody identifies with it on a personal level, and therefore it becomes a corporate expression. When you hear a group of people singing "Amazing Grace", nobody's thinking, 'Isn't it great we all believe this?' But I think that the challenge for modern songwriters is that we think so much of trying to be inclusive that we fail to focus on being compelling. It's a hard balance.