Maximillian: Californian rapper is going deeper than most

As far as house music and the gospel go, MAXIMILLIAN is going deeper. DJ Coopoid spoke to the producer/singer/rapper. 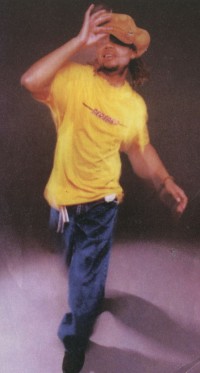 Earlier this year Maximillian's debut album appeared on California's N- Soul record label. It immediately created a lot of interest and in all probability will gain an eventual Alliance release in the! UK. So what's the story behind Maximillian's 'Deeper Than Most"? Our hero was born in San Francisco, brought up on Sacramento and then moved to Los Angeles a couple of years ago to "start kicking things off more in the dance scene, yo!" He now works full time in the N-Soul studios, having recently worked on the new 'Gospel Housing Authority' project and on 'Nitro Praise 4'.

Maximillian was brought up in a Christian family and grew up in the hip hop culture. So how did he get into dance music? "A long time ago I stepped into this club and I saw something I'd never seen before because...in the hip hop culture then dancing was going out: people didn't really dance a whole lot. Even at the clubs, some people were dancing, but the majority of people were just there trying to look cool. So I stepped into this club and they were playing this crazy music I'd never heard before and everybody was dancing. It freaked me out because I wasn't used to seeing the whole floor of people just bobbing up and down! Furthermore, the music they were kicking had like a gospel influence, and I was like, 'Hey, yo! I really need to get up into this. This is where I'm at!'

So exactly how did Max come to work for dance legend Scott Blackwell? "Well, Scott has been doing this for a long time. So as soon as the concept hit me, I went looking, and his name was the first name I came across: he was the only person doing this stuff. I said (to myself), 'Man, it would be great to work for him and be a part of what he's doing!' But it took me a long time before I was ready to come to the point when it would actually be possible for it to happen. So the Lord blessed me and it came through, you know what I'm saying! I moved down to LA and started working with Scott little by little. Then he took me on full time, working for him. So I'm making these beats and trying to work the stuff out!"

Previously Max had toured with hip hop group JC Crew for about three years and released an album in 1991. He then spent some time dancing, singing and rapping for T-Bone. Though 'Deeper Than Most' is predominantly a house record, the hip hop influence, as well as reggae, jazz and "break beat stuff" are all there too, creating an intriguing collection of tunes.

There's a sense of joy and freedom when listening to the album. So did Maximillian enjoy working on it? "Oh. it was a lot of fun! Scott gave me a lot of liberty and he helped me out shaping the stuff and making it complete: he's really good at that. The songs are really from the heart, they're a lot of fun and I want to express that to people the joy of the Lord. People forget about that, but God is really good to us. 'Deeper Than Most' is just about going further. It started off as kind of a joke. I used to say all the time, 'That's deeper than most,' or if someone said something crazy, I'd say, 'Wow, crazier than most.' Or if someone said something dumb, I'd say, 'Slower than most.' The whole concept is basically about doing more. Some people stop at just good enough, and not that many people want to do more."

So is the ministry more important to Maximillian than the music? "Definitely! The ministry has got to come first. I mean music is beautiful, but with no purpose its just noise."

Maximillian has been touring California schools, speaking and performing at alcohol and drug-free events. He has also done schools work in Denmark with Youth For Christ. So what is it that makes dance music so effective in Christian ministry? "It hits people where they live," reasons Max. "People want to be able to get up, to be able to praise, to move. Some people try to use drugs, some drink alcohol, and other people dance, you know. And it's really sad when they do all three! But when you're dancing for the Lord, there's no greater feeling than that, as you're showing him how happy you are. Furthermore, you're literally doing spiritual warfare, because when you're dancing and expressing all that joy, the Devil hates that because you only dance when you're happy! Have you ever seen an angry person dance? Have you ever seen a person who is depressed dance? I don't think so!"

Dancing is by no means Maximillian's only gift. All those who have heard him perform live will testify to his amazing beat box and rapping skills. They are featured on the last track of the album, "The Ultimate Human Beat Box", where just about every sound has its origins in Max's vocal chords: "Ah, man, it's just breathin'," he describes in a humble kind of way!

In a way, the dance culture and the hip hop culture seem totally separate, yet Maximillian has bridged the gap. He's fusing the styles of hip hop and house, and is perhaps arriving at something new? "I'm trying," he urges. "That's why I put some hip hop tracks on the album. You've got to check them, they're definitely real! I'm going to work more on (fusing the two styles) in the next project, doing the whole "bio" thing, working on a whole load of tracks with no instruments."

Finally, a 'Deeper Than Most' exhortation from Maximillian: "All I've got to say to you guys is just keep on serving the Lord, and don't ever forget him, and he'll bless you to the end!"

Hey! I picked this album up when it first dropped, and loved it. I actually put the track 'Deeper Than Most' on an EDM/House music play list for my youtube radio four12radio on 2/23/19...so your sound lives on, my friend! It's sandwiched right between Joy Electric and World Wide Message Tribe! Thanks!