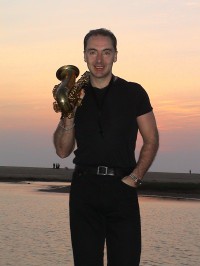 The recent release of the independent album 'Waiting On You' by Michael J Parlett has brought the welcome spotlight on one of the mainstays of the British jazz and gospel circuits. For over 15 years this hugely gifted saxophonist has worked with such acts as Ron Kenoly, Helen Baylor, Andrae Crouch and Noel Robinson in the gospel field and such hitmakers as Take That, Simply Red and M People in the showbiz mainstream. But now with 'Waiting On You' Michael has the chance to play gospel with himself centre stage. He describes the album as "a cross-cultural jazz worship album." Said Michael about the project, "It covers a lot of different genres. It's made up of original compositions plus some popular worship songs we've covered. There are some incredible jazz musicians on the album, but it's also got a lot of vocal input. We've got Joy Rose, lead singer of the band Incognito and currently working with Sting, singing on a couple of tracks; we've also got Lurine Cato, who spent much of last year touring with Kylie Minogue, and another great singer called Mannix Lee. It's been a really fun project to do."

Michael, who played drums during his school days, turned his back on a secure career in accountancy to pursue his dream of being a musician. He commented, "I grew up in a Christian home and went to an Anglican boarding school where we had to go to chapel every morning. I sort of stepped out of church during my teens; church didn't have much relevance to me and I was trying to find myself. Then one day in 1982 or '83 - can't remember exactly when - I saw Luis Palau preach at Mission To London. There was something about the message that really touched me and I committed my life to Christ there."

One side of Michael's work is handled through his company, Talent International. "That's something I started seven or eight years ago, originally just to manage my band," he said. "It's grown into an agency which helps session musicians and vocalists find work within the music industry. There's also a studio and a music management side to it as well."

On 'Waiting For You' is a smouldering take on Mary Mary's chart hit "Shackles". There is also an original by Michael, "First Fruits", featuring Jim Mullen on guitar and Michael doing some extreme multi-tasking - playing flutes, soprano, alto and tenor saxes and percussion. Another standout is "Ishq Tum Bin", taken from Crossroads, an Indian dance theatre production Michael devised in 2003, which was premiered at the Chapter Arts Centre in Cardiff and played to packed houses throughout its run there. The track features Yusuf Ali Khan on tabla and Kiranpal Singh on santoor.

The Crossroads production uses a fusion of jazz, Indian and African music and dance to tell the story of a young Indian girl brought up in Africa who finds true love in the West, to her parents' disapproval. "It's something that came to me when I met an Indian dancer by the name of Madhvi," said Michael. "She does a style of dancing called Bharata Natyam, from southern India, and I thought it would be great to combine that with a variety of musical styles - both Western and non-Western. I collaborated with her and three other musicians."

Celebrating diversity and promoting racial harmony lie at the heart of all Mike's work. "We live in one of the most cosmopolitan countries in the world here, especially in London," remarked Michael, "and I feel people need to embrace that more. That's what I'm trying to do with my music. I go to an African church in East London called Glory Life Church, which is pastored by a Ghanaian. I've learnt so much from being there and have met some great musicians - including Ms Dynamite's musical director, who also goes there. Opening yourself up to people from different ethnic backgrounds enriches your life and makes you look at the world differently. It makes you mature as a person. Half the problems we have in the world are caused by ignorance; we don't understand why people do things in a certain way, so we close our minds to them. One privilege of being a musician is that you get to travel a lot and I've come to appreciate the different ways Christians of various nationalities worship God. As far as my musical direction goes, what I'm trying to do is bring those things together - both with Crossroads and with my album."