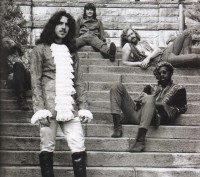 The Wikipedia entry for the West Virginia-based psychedelic rock band Mind Garage spells out their contribution to music history succinctly as "progenitor of Christian rock music." Their Electric Liturgy performed in 1968 was the first documented Christian rock worship service and their 1969 eponymous debut RCA album was one of the earliest Christian rock albums released. Such was their importance that there was subsequently a petition for Mind Garage to be inducted into The Rock 'n' Roll Hall Of Fame and in the current issue of Britain's Shindig magazine there is a four-page article about the group.

The origins of Mind Garage go stretch back to Morgantown, West Virginia, when a group of students attending West Virginia University started a rock band called Glass Menagerie. Glass Menagerie were highly regarded locally and their mix of British invasion and psychedelic covers got them some gigs in the US Midwest. When Glass Menagerie disbanded in July 1967 lead guitarist John Fisher joined the band Shadows Of Knight as a bass player (Shadows Of Knight having had a number one hit with "Gloria" in 1966).

Three of the remaining Glass Menagerie members, Larry McClurg (vocals); Norris Lytton (sax) and Jack Bond (keyboards), returned to Morgantown where, with two other WVU students John Vaughan (guitar) and Ted Smith (drums), they formed a new band. Vaughan introduced them to a young Episcopalian campus minister named Michael Paine and his wife Victoria. Rev Paine had this idea to combine the church's new Liturgy with rock music, much the same way that Charles Wesley and General Booth had taken the popular music of their days to create worship music. Rev Paine saw in the band a vehicle for making his vision a reality. His wife came up with the band name, Mind Garage.

Amadeus Wachtler in Shindig magazine wrote about the context of this re-emergence of the Wesley/Booth strategy. "Despite the cultural revolution exploding nationally, long haired musicians were considered 'hippies' and violently disliked and ridicule, especially in a town like Morgantown, where conformity was the rule and conformity meant being like all the other students involved in fraternities, sports and dances - wear your hair short and dress conservatively. Larry McClurg recalls the members of the band being threatened and harassed. 'Those dirty beatnik hippies is what they called us. We were spat upon as freaks, called communists, and were victims of discrimination, hatred, ridicule, lies, beatings and sometimes called anti-Christ.'" 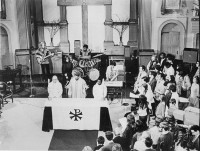 The latter was a particularly inaccurate insult as all the members of Mind Garage were Christians. John was the son of a Baptist preacher, Ted and Jack were Catholic and Norris and Larry were Protestants. The Mind Garage began their recording career in '68 with the single "Reach Out" backed with "Asphalt Mother". Released on the band's own Morning Glori label the single was placed in record stores in Pittsburg, Morgantown, Clarksburg and Fairmont, eventually selling all of its 1,000 copies pressed before being forgotten (though Amadeus Wachtler now calls it "one of the all-time greatest garage/psych records ever recorded").

Mind Garage's live shows became more and more popular. Many of their performances were billed as "electric happenings" and would include light shows, psychedelic effects and all sorts of other musical styles from the opening acts including jazz and Indian music. A residency at The Mother Witherspoon Club attracted packed attendances. Remembered Larry McClurg, "We continued to pack the club for a few months before we started playing at The Olympia. If you understand that WVU was probably the heaviest drinking party school, pulling a crowd into Witherspoon's without alcohol was an awesome feat. I remember graffiti at the top of the stairs, 'Keep the baby, Faith.' It was a play on the cultural revolution phrase, 'Keep the faith, baby.'"

Rev Paine's suggestion to the band to create a modern rock worship service, to accompany the new Episcopal Liturgy, led them to create what later became known as the Electric Liturgy or Electric Mass but when they attempted to perform it in the church the church fathers forbade it. It was a very controversial idea at the time and was met with resistance. The band would often use a poster designed by Tom Warfield, the bass player in the Glass Menagerie, to promote their performances. The posters were themselves very controversial and depicted a bare-chested woman with long flowing hair that nearly covers the breasts, with her arms raised, surrounded by the group. It would later be modified so that the woman's bare chest would have "We Welcome You To The Electric Liturgy, A Festival Of Feeling, The Electric Mass" covering it. Eventually Rev Jennings Fast of The Trinity Episcopal Church in Morgantown allowed the band in and the service was so well received that offers to perform it in other churches followed. Larry recalled, "After the rock worship service, one fur collared woman exclaimed to her dark suited husband on the way out, 'I didn't know they were like THAT! That was BEAUTIFUL.' And so it was."

The band's performance of the Electric Mass might have shocked more conservative church goers but it also garnered Mind Garage a lot of publicity. They were featured in the Huntley/Brinkley Report, written about in The Village Voice where they were called "theo-rock" and, most important of all, had the entire Mass filmed by ABC Television when the band played St Mark's Church in New York City. The event was broadcast nationally on ABC's Directions series.

A Pittsburgh-based manager, Tom Surman (aka Cossie), picked up on the band and after some demos were cut in Pittsburgh the band landed a deal with one of the world's big record labels, RCA. Mind Garage set about recording their eponymous album debut at the RCA Studio in New York City. Amadeus Wachtler wrote, "The album features some great garage ('Life') and psychedelic rock ('Doctor John'). But it's 'What's Behind Those Eyes' with its mix of Tommy James & The Shondelles harmonies and John Vaughan's fuzz guitar that's the real highlight."

RCA Victor released "What's Behind Those Eyes" as a single in 1969 but it failed to get radio play. What was even more disastrous for the band was after Tom Cossie had wrangled the band an opportunity to play at Woodstock the group, urgently in need of money, turned it down in favour of a paying gig in Cleveland with the Dick Clark Teenage World's Fair. Snubbing Woodstock was what Larry McClurg later described as "life changing." In the autumn of 1969 a pilgrimage to San Francisco was made but when returning to West Virginia John Vaughan had decided to stay behind. Now a quartet, Mind Garage began recording 'Again! The Electric Liturgy'. Alongside covers of Presley's "Jailhouse Rock", Little Richard's "Lucille" and the Rolling Stones' "Paint It Black" the album contained "Processional Kyrie Gloria", "Offeratory (Sunday Christian)", "The Lord's Prayer" and "Communion (Water)". The album, released in January 1970, received minimal promotion and after playing The Fillmore East with Iron Butterfly and performing their 19th and final Mass that spring, the group drifted apart. Mind Garage stopped showing up at the house they shared, left their equipment behind and were never to record or perform again. Their manager eventually sold the equipment and as Norris Lytton recalled, "It was as if we had all been called together for a time or a task and now it was recess. It was like exhaling."

The Mind Garage did eventually get back spontaneously in '83 at a wedding anniversary of a friend. That in turn led to a recording session but the recordings remained unreleased and the band members parted ways again for another 24 years. In 2007 the five original members of Mind Garage reformed to play a reunion concert at Goodstock in Summerville, West Virginia.

In 2009 the band once again began writing and recording, the result being 'The Mind Garage 5', released on their Yellow Sun Music label. More recently they have been recording a new version of the Liturgy which will be released as a free download or an autographed physical copy. In the meantime, a grasp of the Mind Garage's contribution to rock music history continues to grow. Wrote Amadeus Wachtler, "Recently, an acetate of initial demo recording sessions in Pittsburgh, prior to RCA, and including 'Asphalt Mother' surfaced and was released as 'A Total Electric Happening'. The record captures them at their finest - a young, original, energetic group that RCA heard, loved and signed. Even though it is not a live recording it does capture the raw sound that propelled a group of West Virginia University students to the heights of rock and who would, with Rev Michael Paine's help, create a new genre of rock music and method of Christian worship that may yet gain them induction into The Rock 'n' Roll Hall Of Fame based on their role in the integration of rock music and religion."

Always a favorite of mine, both in the clubs and during worship services. Glad to see that these guys are getting well deserved recognition.

I vaguely remembered them in the Glass Menagerie days, hearing of Mind Garage only by word-of-mouth later. Awesome home-grown talents! :-)

After all these years they are still the best live band I've ever heard. I still play their music often and wonder what could have been. Fame is an elusive thing.

Thanks for your article!

I stumbled across your article and liked it very much. It is very accurate. Thank you.