Monique Thomas: The Birmingham based diva with the "Colourful" radio hit 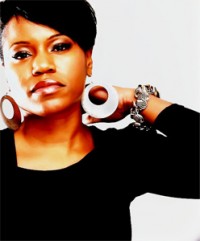 The fact that "Colourful" by Monique Thomas featured prominently on the Cross Rhythms playlist in both its original form andthen in a club version conjured up by some gifted Australian remixers means that the Birmingham-based diva probably had the most played song on the station during 2011. Monique's debut album 'Unbroken' was produced by mainstream hitmaker Tony Bean (Lemar, Kelly Rowland) and response to the project has been entirely positive. As she told broadcaster Mike Rimmer, "I've done some exciting dates. Saturday I'm supporting Avery Sunshine in Birmingham. I've been asked to support Eric Burnet recently. The soul scene has really picked up 'Daughter Shine', so I'm getting a lot of love from soul music radio stations, abroad as well. I'm writing dance music as well. I've had my first dance release on Universal Records in Australia. It's such an organic process: we're just going where it's drawing us right now. My diary's really filling up. I'm planning a regional pub and bar tour. I've researched every single live music night in the region and we're just putting some dates together for that now. Then taking it further afield, nationally. I just want to be out there, blessing people, sharing music."

There is a strong theme of healing and discovering self-worth running through 'Unbroken'. The song "Precious" is a "smouldering slow jam that speaks of a woman's worth and "What A Woman Needs" is a melodic piano-led anthem for teh females and a message to the guys." Many of the songs were inspired by Monique's part time job working with women in prison or probation. She said, "We do an eight-week course at the moment, hand-picked by them, but it tends to cover things around self-esteem, confidence, identity, relationships. Domestic violence is huge. These women are leaving the sessions, and I feel so lifted and empowered to make changes in their lives. Sometimes I give them a CD, which is my round-the-back ministry. I'd like to go on and do some kind of conferences, in the sense that will draw people outside the church community."

Monique feels that many of the songs on 'Unbroken' are taking Christian principles and values and repackaging them for a secular mindset. "Yesterday, part of the session I was delivering, the title I had was, You Are What You Think, which, for me, has come from Proverbs -- 'As a man thinks in his heart, so is he'. That was a platform for me to talk to them about their thought-life, how thoughts shape our beliefs and attitudes, and result in our behaviour. So we look at the brain, how the brain receives information from what we see, hear, touch, taste. That is Biblical. They start to think about, 'What am I exposing myself to, what am I listening to?'"

The singer was born Monique Lawson in Birmingham. She spoke about her early life. "I grew up with my mum and dad until the age of five. They divorced, as with many families nowadays. I was raised by my mum, then a few years later by my step-father. We had a noisy house. I grew up initially with my older brother Errol and my younger brother Dom, who's also musical - a brilliant saxophonist. Errol moved out, went through his dramas. Neither of us grew up in church, but when he was on the wild side, he was on the wild side. He's a youth pastor now, which is incredible. Me and Dom, we really got into music at a young age, singing down the house. Errol actually helped me with my music when I was younger. He was my manager for a good while. Me and Dom really got into music: he picked up the sax, I played the cello for five years, but ask me to play it now and you won't get a pretty sound." 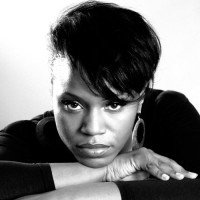 Monique was 18 when she became a Christian. She remembered, "I was dating a guy who was in the church. He used to talk to me about church, and I was like, 'I ain't interested'. But because he played music, I was interested in that. I remember the first church gig I went to. I felt like everybody was watching me, like there was a big spotlight on me. I left, I remember crying. Church was this underground community I'd never seen before. It was quite bizarre. I went to the music event, and I went to a youth event as well. On the Saturday of this youth event, I remember I phoned my friend and said, 'Melissa, people are dropping down - all kinds of madness in this place'. My boyfriend's best friend said to me, 'Don't underestimate the power of God'. Then the Sunday I was really emotional and I couldn't understand why. They asked the young people to come to the front to pray for them; I went. Somebody prayed for me, and before you knew it, my head was under a few chairs."

In the summer of 2008 Monique went through "a period of revival", going to church for six weeks and leading worship. Also in 2008 Monique met up with the renowned record producer Tony Bean. "I met him when we were doing the Star Awards. He's just a cool guy, he's like a big friendly giant. I talked with him, buzzing, and he just saw something in me. He's been a huge encouragement. He loves God and he loves music. He said, 'Yeah, I'll help you do this'. All along the way he's been saying to me, 'Are you sure you're ready?' That's been so good for me, because he's made me ask questions of myself. This journey is not easy: if you really want to honour God, the music industry is a difficult terrain. Especially if you're someone who's going to be performing on secular stages; you've got to be in God and hearing from God to know what direction to take."

A single "Anything" under the name Monique Lawson was released. But then everything went on hold for a season when the singer decided to marry a professional sportsman, Aaron Thomas. It was no easy decision for someone who had seen her own parents' marriage fail. Said the singer, "I'm not walking in the shadow of my parents anymore. I believe God's given me new ways to live my life, new strategies. The Bible: it is a manual for life. With my husband, we'll find our way. That's given me confidence. Marriage is always a risk - it's a calculated one, a step of faith. You never know what it's going to be like, so you're applying your faith and your love. I actually wrote a song about this, about loving in faith. You love, in spite of the risks of your heart being trampled on. I'd be lying to say that there is no fear in thinking you're giving your life to an individual. But the beautiful thing about love, in Christ, is that there is no fear in it. That sounds contradictory, but the Bible says that perfect love casts out all fear. When I think about Christ going to the Cross, even knowing that we were going to do all this stuff, we were going to reject him, he still loved us wholeheartedly. That is serious love. Unconditional love means that you love through challenges, through difficulties. If you're not prepared to face those things, you're never going to work out unconditional love in that relationship. So you made that commitment, and that's a big word. Before I got married, I was one of those people that was concerned about giving my heart to someone. I remember praying in tears, and God said, 'You're safe with me. I've got your heart.' That was just peace. Now I don't have to worry: I know that God has got Aaron, God has got me, and I don't have to fear anything he takes me to."

For the future Monique finds taht her songwriting is beginning to flourish. She said, "I've been writing with Daniel Hutchinson - he's my guitarist and a brilliant songwriter as well. I'm looking forward to coming out with some new stuff. I'm not going to get hung up on an album: I've made it now. It'd be fantastic if I could get a little project released again this year. People always want new stuff; it doesn't have to be your full-on studio album. And hopefully there'll be some interesting collaborations."

For more on Monique visit the Monique artist profile