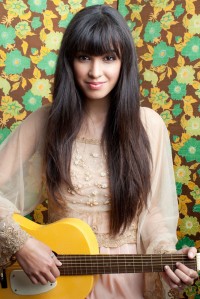 Moriah Peters may be a new name to some Cross Rhythms radio listeners though with her "Glow" getting airplay that is changing. In America Moriah has enjoyed a major Christian radio hit with her powerful ballad of devotion "I Choose Jesus". 19 year old Moriah's first big break in Christian music came when her voice and music was featured on the Veggie Tales DVD 'The Princess And The Popstar' though anyone thinking that Moriah is anything like Veggie Tales' vacuous pop princess character Vanna Banana will change their viewpoint once they hear her intelligently crafted music. The singer/songwriter began talking to us about her Cross Rhythms turntable hit "Glow".

"I love what it says and I love the feel of the song. This might be a bit overboard for you, but to me it has sort of an ethnic feel: it's a bit reminiscent of some of the music that comes from my heritage, just the beat of it. I was born and raised in southern California and the Los Angeles area. My parents are first generation Christians so I'm so thankful that they were able to pass that on to me and my older sister and younger brother. They were the oldest of their families - the oldest of five for both of them - and they both came from either poverty or abusive families. My dad had an alcoholic father; my mother just came from a really poor background. There was never a lot of money, but something that both my parents had in common was this incredible desire to grow and to rise above and I think that's something that God instilled in both of them. That brought them together in the end: it was all part of God's plan."

Despite being born into a Christian home, at high school Moriah came to a point of spiritual crisis. "In high school I'd been asked so many difficult questions by my classmates and by atheist professors. In Los Angeles the default religion is not Christian, unlike other parts of the country, but atheist or agnostic. So I was sort of against the grain in high school and when I was asked all those questions I came to the point where I had so much doubt and didn't feel like I had any of the answers. I did question the big fundamental things that I had been raised on and I questioned the existence of God and just wasn't sure about anything anymore. But there was a pivotal moment: it was the moment from which I wrote 'I Choose Jesus'. I was on my roof in my backyard and kind of talking out loud and asked, 'God are you even real? because none of this makes any sense to me right now' and I just came to the very practical decision and practical place of thinking: if God's not real, then none of this matters; but if he is real then nothing else matters, and I have to choose to live my life for him. I was so done with the over-analysing and the philosophy of it all because when you dig that deep there comes a point when two plus two doesn't even equal four. So I talked to God and said, 'OK God, this might not make any sense to me right now but I'm going to trust that understanding will be a result of my faith; so I'm going to show faith in this moment: God I choose you, Jesus I choose to believe in your life and your ministry and I'm going to seek the truth even more, for my own self.'"

While growing up Moriah's deep, contralto voice had always attracted attention, though not always positively. She recalled, "I always had this very low register voice. They actually called me 'Froggy' for years; my dad called me Froggy sometimes - an 'endearing term. . .' I always wanted to sing with the boys in the choir and I always wanted to sing the lower parts, but I was forced to sing the high parts and grew up thinking that I sucked at singing. I took a lot of lessons and like anything else, I think that if you have an ear for it and if you work hard enough you get better at it. So I sung a lot and think it had to do with puberty - my voice changed a little bit, thankfully - and I then discovered the singer Jaci Velasquez. Her voice is so deep and so sultry and even at a very young age she had a very deep voice and I was so drawn to that and drawn to other singers like Sade and Chaka Kahn, and was excited to discover that if you're a girl you don't have to sing as a soprano. You can sing other kinds of ways as well. That encouraged me to keep singing." 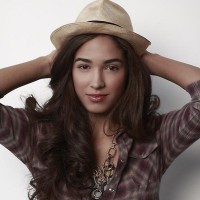 Moriah auditioned for American Idol, but they were harsh to her because of her wholesome image, telling her to experience life ("kiss a boy") before entering the music industry. But Moriah held to biblical standards about dating. Something good, however, came from the American Idol experience. She was introduced at the audition by a stranger to Wendi Foy, and this was because the stranger was touched by the values she portrayed at the audition. Foy helped Moriah make a three-song demo to market to record labels in Nashville.

However, it was a best selling DVD and CD series starring animated vegetables which was to be Moriah's first breakthrough. She explained, "I was already talking to Provident and my contact there at the label told me about the auditions that Veggie Tales were running. They were looking for a teenage girl who could sing. As soon as I heard about the audition I said, 'Yes, I would love to do it, give me the music, give me the lyrics, everything I need to audition with, and I will be ready'. So I did what I would do sometimes in high school when I would be studying and preparing for big exams - I would listen to things while I was sleeping. So I put the music on all night long so that I would get it in my subconscious and I practised non-stop so that I could memorise the lyrics. I wanted to be comfortable with the song before I went into the audition. When I did go into the studios I was so glad that I had prepared because I was so awestruck by everything, by the characters: I got to meet one of the voices of the characters.

"I'd grown up loving Veggie Tales. 'Where's My Hairbrush?', the Cheeseburger song, Madame Blueberry, all of it. I know all of the songs, and even in college - I got to spend my first semester of college on campus this past fall - when I was feeling lonely because I didn't have a roommate I went on to Netflix and watched a couple of Veggie Tales. I was praying so much that I would get the part of Vanna Banana. I thought it would just be so much fun and it ended up being an experience that I will never forget."

Moriah was particularly taken with the message of 'The Princess And The Popstar', she said, "I think it's one of the strongest messages that a Veggie Tales movie has come out with, about wanting to be yourself and owning those things that God has given you and the person that God has made you and the things that make you different; and not wanting to live the life of someone else because it seems they have it better, but taking advantage of what you have in front of you."

The singer's contribution to 'The Princess And The Popstar' extended beyond her vocals heard on the DVD. There was also a CD. "For the CD I sang five additional songs. It was awesome. I was able to sing a lot of covers. I don't know if you remember one of the Veggie Tales songs 'I can be your friend, la la la.'?, I sing songs like that and a couple of other originals that they wrote for the DVD - they were all such sweet songs. But I actually haven't heard the CD! I've been a bit too focussed on my own album."

Moriah was signed to Provident's Reunion Records. "I was doing quite a lot of things at the same time. I was working on the 'I Choose Jesus' album from about November 2010 to June 2011 and wrote about 80 songs. Out of those we picked 11 to go into the studio with. So over the summer of 2011 we recorded all of the songs and went into production. Then in the fall of 2011 I got to go to college at Grand Canyon University and now I'm continuing with online courses. Then the beginning of 2012 was just focussing on marketing strategy and the art design behind it all, photo shoots and so much fun things like that: picking a single, radio visits. I got to go on tour during the months of March and April and a bit of May."

Moriah toured with MercyMe, Tenth Avenue North and Lecrae. It was what she described as "an incredible experience" though she admits that opening a concert in front of 17,000 people with just a guitar and a ukulele was not without its pressure. She said, "It was a huge challenge for me but I loved it, to be able to first of all go up on to the stage and go up with this mentality that it's not about me, it's about the Holy Spirit going forth and connecting with who he pleases and recognising that I'm not going to get everybody's attention, that as a lights-up act there might be a few people walking in and some people still eating their hot dogs. I was just like, you know what, this moment is not about me but it's about lives being changed through lyrics and through songs. So that was a challenge. I really struggle with stage fright, so that was a good exercise in battling that anxiety and praying against it and learning how to trust God as I'm walking on to that stage. It was wonderful having the opportunity to sing in front of that many people and share a message with them; meeting people in the signing line and having them share stories about how they were impacted by 'I Choose Jesus'. Also getting to be in contact with people on Facebook afterwards and getting to hear how the song brought them closer to God. I get to look back and say 'Wow'. That definitely wasn't me that made that impact: that was God, that was the Holy Spirit going forth. There's no way that I could have impacted that many people with just my little guitar. So that was a great experience."