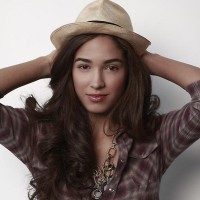 THE CCM singer (and wife to For King & Country's Joel Smallbone) Mariah Peters, who has released the albums 'I Choose Jesus' (2012) and 'Brave' (2014), has started a new group, Trala. The trio, consisting of Peters and former band members from her solo days Jesi Jones and Julie Melucci, will head out on a US tour this autumn. It is said that years of touring and doing music on her own left her with a "gnawing loneliness and desperate desire for change." During a recent trip to Jerusalem, Mariah was praying about her next step. She said, "My prayer was simple, 'Where next?'. The revelation I had in that very moment was that I didn't need to go anywhere, I only needed to turn around and notice who is already there with me. The fear of being alone suddenly transformed into vision of future collaboration."