If you caught the infectious rhythms and clever lyrics of "Soap" by MUKALA on Cross Rhythms Experience Vol 30 sampler, you'll know that this band from the States are something special. Mike Rimmer explains why. 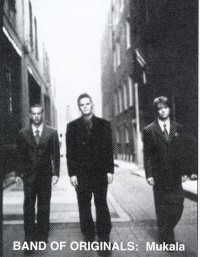 Awhile back in a fit of foolish enthusiasm, I got carried away with the concept of an album called 'Mindy's Revenge'. Basically Word Records in the USA decided to put out an album of material showcasing a pile of the best-unsigned artists their A&R men could uncover. In Holy Grail searching swashbuckling style, Dave Derbyshire and I spent an anxious couple of months attempting to track down each artist to their various motels, boltholes and houses to get the story of each artist.

During one late night conversation with the hilarious Dan Muckala whose song "Soap" had been recorded for the album by his short-lived band Vine, he tipped me off to look out for his next project, 'Mukala'. He promised it would be an altogether different rock'n'roll experience! He wasn't wrong. But we'll talk of that in a moment. First some background.

Muckala was saved at seven years old when his nine-year-old sister scared him into heaven with her Sunday school revelations of Hell! I tease Dan that he was delivered from a life of debauchery at the age of seven. He laughs and agrees, " Exactly, I .was wild!" He then confesses it wasn't always a smooth ride, "I went through a period when I was in high school, as many young people do, where I questioned a lot of things. I didn't exactly fall away from God at that point in my life, but I would say that my relationship with him took second place to a lot of other things in my life, and it wasn't until I moved away from home and began going to a Bible school, where I really committed my life to God, and my life took a turn."

Dan was 19 when he wrote his first song and confesses, "I was a late bloomer. I didn't really start writing music until I went to college." So was songwriting an integral part of expression for Dan's faith? "Yes. Very much," he agrees. "That's a very astute observation. When my life started turning around, and I became much more committed to the Lord, I think the song-writing came around with that. It's always been that way for me - the times when I've felt really close to the Lord and he's been teaching me a lot have been the most inspired times for me as a writer as well." So does Muckala look back on the songs that he's written as some sort of journal? Again Dan agrees, "Very much, and I also look on it as a developing process whereby I've learnt to express what's happening inside better and better as time has gone on."

After Vine split up, Essential Records signed Muckala and hearing his songs, it isn't hard to see why! Talking about writing, he says, "I think as a song-writer I always wrote songs from the standpoint of an artist - I haven't ever been the kind of writer who can ever just sit down and purposely write songs for other artists and have it come from that gut level place that I know I want my songs to come from. So I think I've always known somewhere deep inside that I would end up being an artist, and the transition from being a professional songwriter to what we're doing now has been interesting, but from an artistic standpoint, it hasn't been hard at all. It has been actually quite liberating to be able to sing my own songs, and to interpret my own material in the way that I've always wanted to."

A fact which is played down is that Mr Muckala also has a secret sideline as an inspirational songwriter with his material covered by the likes of Anointed, Bryan Duncan, Amy Morriss and Crystal Lewis. He was even nominated for a Dove Award for "He Walked A Mile", a huge inspirational hit for Clay Crosse. He says, "Sometimes I write a song that we would never cut as a band and sometimes I write a song that would be perfect for another artist. I've been privileged to have other artists interested in songs that I've written and want to cut them." I wondered whether Muckala is shy of being known for this side of his career because it isn't very 'rock'n'roll'? "I don't necessarily try to play it down," he says. "I am very thankful for the things that we've done. We just want to make it clear that the direction of this band is completely different." You can say that again! Enter the dynamic debut release 'Fiction' and you enter a world of incredibly memorable tunes, hi tech production sounds and the freshest Christian pop of 1999. In the process of getting the album together Dan is joined by two permanent members of the band, drummer Jason Collum and guitarist Alex Nifong.

Thematically the songs cover a range of topics from the simple message of cleansing redemption in "Soap" and the brilliant "Original Sin". Of the latter, Muckala states, "I would have to say that 'Original Sin' was inspired by the whole idea of, in our culture in America, I know that this is true, in the western world in general, there's a pushing of the envelope in arts, and in movies, and in other kinds of media, and when I say 'pushing of the envelope' I mean breaking new ground in terms of more and more shocking things are being displayed across the screen and in other kinds of media, and it almost seems like the more shocking, the more grotesque, the better. That song just basically talks about how that doesn't really lead anywhere, and it's really not anything new, it's really all basically just the original sin that we've all been dealing with as a human race since the beginning of time, and it's really nothing new."

One of the most interesting songs on the album is "Story Of Her Life", both musically and also lyrically. Abortion is a difficult topic to write about without becoming preachy. Dan is aware of this when he says, "The issue of abortion is a hot topic here in America. As Christians we have to believe that it is very damaging obviously for both the child and the mother involved, and we have a pretty strong feeling about that as a band, and we take a pretty hard stand against it. But it is important for us to do that in love. The song 'Story Of Her Life' is just a song about a bad choice that a young girl made, and it talks about the standpoint of the person that was aborted; it talks about what might have been the story of her life, and it was a kind of interesting way to say that."

Alongside the catchy melodies and simple messages, a listener would be foolish to reduce the band's work to disposable, easily digested CCM pop tunes for Dan Muckala's writing has a touching quality in places and a depth which deserves respect. And musically, the inventive quirkiness, strong sounds and state of the art production will make Mukala a force to be reckoned with as a new millennium beckons.

For more on Mukala visit the Mukala artist profile