Fest favourites MY SPOON were quizzed by Tony Cummings about their music, history and plans. 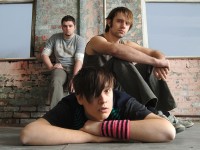 The Manchester rock three-piece My Spoon have achieved an extraordinary amount for an independent band without the promotional muscle or the finance of a record company behind them. With a sizeable, and still growing, support base, a highly praised album 'Love Stories And Lies' and storming appearances at numerous Christian festivals things look good for the outfit. Consisting of vocalist and guitarist John O'Brien and drummer Dean 'Deano' Needle (they are currently auditioning for a bass player), the band, now full time, are winning new fans wherever they play with a sound which Deano describes as "Rage Against The Machine meets Busted, a mixture of sing-a-long choruses with powerful riffs jumbled up with a high energy live show." John and Deano (sounds like a surf group!) took time out to answer some of my questions.

Tony: How did the band come into existence?

Deano: John OB and I have been making music together since we first met in primary school! Line ups have changed and we've passed through various bands and had a shot on different instruments but we've always written music together. After we'd finished our school years John OB began working for YFC as a youth worker, and I took up a similar role working for NGM. After a while God put it on John OB's heart to start a Christian rock band, with a vision to be a quality group that would be there to challenge Christians and non-believers alike. So he acted on this and gave me a call... life since then has been a progressive push towards the work that we do now!

My Spoon is now a full time band - John and myself both have flexible bar jobs in Manchester to help pay rent, etc, but apart from that we travel far and wide across the UK, and sometimes into Europe. We play a wide variety of venues from dirty local pubs to your big Christian festivals, schools work, church outreach events, and worship sessions. In short we do everything we can. We do this with the aim of passionately showing through our music and performance that God is very much alive and how we love worshipping him.

You might have noticed the lack of mention of our bassist thus far. This is because over the past four years we've had various bassists! At the moment we are eagerly searching for a full time bass player and are auditioning as we speak. Because of our demanding schedule it's hard to find someone, but do not despair! We are very blessed to have a lot of highly skilled friends who help to cover all of our gigs: Scotty-B, Abhi Shakes and Rob Kay - thank you.

Tony: What is your history prior to the My Spoon single in 2003 and how has the band evolved down the years?

Deano: My Spoon have evolved dramatically down the years, with influences from changing bassists, life situations and good old experience! We always aim to produce honest music; music that reflects who we are and what we believe. This is often lyrically worshipful (but not in a cheesy way), yet also contains times of struggle and confusion! We are proud of each of the three My Spoon recordings, although they are really different! Our latest album 'Love Stories And Lies' is the best reference to our current sound, although we have recently started writing new material, with yet more influences and stylistic themes - after all, who wants a band's songs to stay the same?!

Tony: What do you remember about the recording of 'The Phat Of The Spoon' EP?

John OB: 'The Phat Of The Spoon' was a great EP to record. At this point Drez Barker was playing for us and being from Barbados he brought a very different element to a three piece rock band; a really groovy laid back - "yeah man" approach. We'd also started to play a lot more shows at this point so all the songs had been road tested. By the time we came to record them we already had some people beyond our family and friends to sell it to which is always nice.

Tony: What do you remember about the recording of 'Love Stories And Lies' album?

Deano and John OB: Having almost sold out of our first two EP's we thought it best to move on to bigger things and making an album seemed an obvious step. 'Love Stories And Lies' was really interesting for us as we set a date to record having not written the whole album, and then locked ourselves away to write and produce with our then-current bass player, Dave Reason. We'd never written under pressure like this before but it was a great bonding experience! There were great times of prayer, eating cake and of course 10 hours of practising a day.

We had a larger budget for this CD and it was awesome to work alongside Neil Costello over three different studios to really get the best sound that we could afford! As a band we had put a lot of work into the songs prior to meeting up with Neil, who then made minor alterations which had great effect! Although time seemed short in the studio (three weeks) we were excited about the sound we were capturing. I can't wait to get in studio and put some of these new tracks down when that time comes!

Tony: What are the biggest gigs you've played so far?

John OB: We released 'Love Stories And Lies' late March in 2006 and squeezed in 115 shows in 2006 - the biggest gigs were Spring Harvest after-hours and the Greenbelt festival. We're even told My Spoon had the official biggest crowd at stage two throughout the whole festival. The 400 capacity venue was filled with a further 300 being turned away! As with any of our shows we owe a lot to our dedicated fans. Many have promoted our gigs looking daft - running round with a 7ft spoon, stamping people and doing anything possible to get them to come along! We really do have the best fans in the world - thanks guys.

pop club was wel ace lol. the face that got prett dangerous i couldnt breathe but hey it was fun!!! keep rokin guys ur awesome best band ever

hi guys great news about you finding your bass player you so rock i cant wait to hear you again in the future!!!! plus your merchendise is so cool Keep rocking guys

woohooo
my spoon are the greatest.the best band in theee world.
st johns church best gig yet.
love the stamps but you should so make hats and belts

ahhh they love all us fans!
cant wait to hear the new songs!
good luck with the hunt for the new bassist guys!
awesome interview!

Hey guys well done awsome reading about you guys your awsome people and well deserve the breaks your getting!
Keep up the good work guys!!
Bless ya's

I love My Spoon! Last time I saw them me and my mate must have spent over an hour talking to them after the gig.

With Rage Against the Machine reforming to play Coachella, why was this god stuff the first thing to pop up on a Google News search?

yay! they love us! woo! this is funny! we're the best fans in the world...
and i knew like all of this... and i didn't want to comment, but mike rimmer told me to!

For more on My Spoon visit the My Spoon artist profile