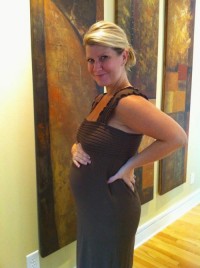 The new album by Natalie Grant, 'Love Revolution', debuted at 32 on the Billboard Top 200 and at number two on the Billboard Christian albums chart. A portion of the proceeds for the CD go to the Home Foundation, the charity Grant founded in 2005 to raise funds to fight human trafficking. With a husband, twin daughters, a baby due at Christmas and a music career that has seen her become CCM's best selling female artist named four times by the GMA Vocalist Of The Year, Natalie has a hugely crowded schedule. She was asked recently how she coped with the relentless demands on her time. "Every time I think about it, I get exceptionally overwhelmed! When we found out I was having twins, it was overwhelming, but I thought, 'I have two hands; there will be a hand for each baby.' One to two is an okay ratio, but one to three-we are totally outnumbered! My children tour with me, so it's going to be interesting, but we'll figure it out as we go along. Touring next spring will be the test of how to do this with three kids. I know having another child will affect things, but I know too that I'm still called to do what I do. Somehow, God just gives us the grace to do everything he's called us to do."

On 'Love Revolution', a couple of songs express an urgency for Christians to do something in the world. Natalie said, "It's so easy to become entrenched in our everyday lives and with our children and their activities, and you wake up one day and say, 'Yes, I've invested my time in my kids.' But God also has a plan for each of us and that's reflected in the album." The CD has two main components. One comprises praise and worship songs. "It was an intentional thing," she said. "When you are trying to inspire someone to have a love revolution they have to have a revolution of their own heart first."

Despite the album's excellent initial sales, one or two critics have not been entirely enthusiastic. Wrote jesusfreakhideout, "The worship songs especially are hit-and-miss and I would have favoured original tracks over covers. However, all of the upbeat songs are done particularly well and serve as the highlights of the album." One of those highlights is "Human", written by American Idol winner Jordin Sparks, along with Jason Ingram and Dan Muckala.

Natalie spoke recently to theboot website about her entrance into motherhood. "Most of you know that I have twin daughters. Gracie and Bella are three years old now. What some of you may or may not know is what I had to go through to become a mommy in the first place. Having been told that my husband and I would probably never conceive, it was quite a process indeed. It was a long road of costly fertility treatments and LOTS of shots."

This time around, though, there were no shots or fertility treatments, which is why Natalie and her husband, producer Bernie Herms, were thrilled to find out their daughters were getting a younger sibling. "Fast forward four years and imagine my surprise when that little pregnancy test showed a positive sign," she continued. "I thought this wasn't possible!"

It was the day of the devastating Nashville flood that Natalie discovered she was going to have her third child. She explained, "I hadn't been feeling well and all of a sudden I started to recognise some of the symptoms. I had an old pregnancy test (from four years ago) in my bathroom cupboard so I just decided to take it. The positive sign came up so fast, I started screaming for Bernie and told him to go to Walgreen's and buy every brand. I thought the one I had must have been outdated and something was wrong with it. Six tests later, I was still pregnant."

Unlike some of the complacent CCM stars of yesteryear there is a heartening militancy underlying Natalie's attitude towards her faith. She told Christianity Today, "It's like we've spent so many of the last few decades building our church buildings, building our programmes, building our numbers, that it's time to stop 'doing' church and start 'being' the church. Helping those in need is really what the church does best. The church doesn't belong in politics. The church belongs in helping the poor and the widow, in rebuilding people's lives. Over the last several years I've realised that what I do is more than just music for me. It's really more about a movement, a call to action - music that would compel. That was my prayer in writing and recording this CD.

"I accepted Christ when I was six years old; I feel like I was born in a church pew, and I've been in church my whole life. Growing up, I did a lot of mission trips, but it was like we looked at them as a moment in the year when we 'did' missions instead of looking at missions as a lifestyle. When I went to India in 2004, it was such a wake-up call. It was an absolute 'I've-got-to-do-something' urgency to bring an end to human trafficking. But it was so much greater than that. It was for me personally a spiritual shake-up. I'd been pursuing all of these things in the name of Christ, and my name might be at the forefront, but it was time to reverse that. It's not about my name or my career or my reputation or my ministry or any of that. The way to really feel alive is to give your life away. Because that's happened in my own life, it's going to find its way into my music."

If anything, Natalie's sense of urgency has deepened since she became a mother. Said the singer, "A lot of people expect that when a female Christian recording artist has children that she'll slow down, possibly do a lullaby record [laughs]. For me, I had a greater urgency than ever before to do what I do, especially because I have these little girls. I had just come from this part of the world where I literally saw 14 year old girls who were forced to work in a brothel, had no childcare for their one year old, and would tether them to the bed because the people still made them work. These little children and the girls who are being forced to work are somebody's daughter and somebody's sister and somebody's niece and somebody's friend. It's so easy to think of them as 'them' - as 'those people'. But really, they're us. They could be any one of us. When I had my daughters, I had a greater sense of urgency for what I do because I have such an opportunity. God has given me a platform to speak, particularly to women. I don't know how long it will last, but God's given me this window of opportunity. So why would I ever slow down while I have this moment to tell a young generation the truth about who Christ is, about who they are in Christ? Those young women are going to grow up and be the role models for my own children, so I feel an ever greater sense of urgency to sow into the current generation."

Natalie recognises that God has given her a high profile platform to speak out about the scourge of human trafficking. But she feels all of us have a platform to become active in fighting such strongholds of sin. "I think every single one of us has a platform, whether it's in your own home, your church, your workplace, your school, your children's school, your neighbourhood. Our platforms come in different shapes and sizes, and they may impact others differently. When I was in India, while my husband and I were walking through the red-light district, the Indian gentleman with us was giving us all these facts and figures. In India alone, several million people are still trapped in slavery, and 85 per cent of them are women, 85 per cent are under the age of 16, 85 per cent are forced to do the unthinkable 40 to 50 times a day. It's so overwhelming that, no matter what kind of platform you have, you think there's no possible way you can do anything about it. It's so beyond the scope of one person. So we asked [our Indian guide], 'How do you get up and do this every day? The problem is so big. How do you actually think you could eradicate it?' He said, 'We see the millions. We see the scope, the umbrella of the problem. But God sees the individual, and we just help the ones he puts in our path. Today, it may be one; tomorrow it may be 10.'

"It was such a reminder that that's how all of us should live. It's just the one that God may send. It may be in a school group where you're a mom who has a chance to minister to another parent. It may be in your college where you're a student. There are a lot of ways that it can happen, but we have to remember that our platform isn't about the thousands or the millions; our platform is about the one. That's the love revolution."