Down the decades Australia has provided the Christian music scene with many a top recording artist. From the Newsboys and Rebecca St James through to the ongoing worship phenomenon Hillsong, many Australian acts have found their way to international success after building up a sizeable following in their homeland. Now it seems that the rock band from Sydney, New Empire, with a high profile album released by Tooth & Nail seem set to join that list of breakthrough acts. The band, consisting of Jeremy Fowler (lead vocals, guitar, piano), Kale Kneale (drums), Kyle Lane (lead guitar) and Nate Cairns (bass), explained to JesusFreakHideout.com how the band's third album 'In A Breath' resulted in them being signed to Tooth & Nail.

Said Kyle, "The way I remember it is that we had sent the album to them, as we did with many other labels. What we heard back was that Tooth & Nail loved it and wanted to have a chat on Skype. When we met with them, they were so excited about our record and so excited about us as people. It felt like there was a genuine care and enthusiasm to see us succeed in the States, which we didn't see in any other labels. This is what really got us over the edge."

One of the standout songs on 'In A Breath' is the opener, "Tale Of Jonah". Kale Kneale told the MindsEqualsBlown website, "Jeremy wanted to write a song about the story of Jonah and the whale. Not a fairytale, but the gritty, dark and cold reality of what it would actually be like to run away from everything you knew you were supposed to be and get swallowed up by a giant of the ocean." Equally strong is "The Sun Won't Sleep". Said Kneale, "Every so often in life we experience a day we wish would never end. This song is about those days, when the sun seems to rise for three days and takes another three before setting again. Our senses are heightened and we experience life in its truest form. I would love to go to a place like this more often. I imagine Heaven to be not too dissimilar." 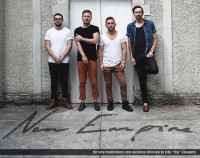 Another track on the album already getting noticed is "A Little Braver". Explained Kneale, "This song was written on New Year's Eve. There is a pregnant anticipation in the air full of the promise of new beginnings come December 31st each year, but I have found that without a fundamental catalyst of change in oneself, no tick-over of a clock can really heal our hurts or scars. As I grow through my own journey of self-discovery and truth, I can embrace the scars and be even thankful for them, knowing they can ultimately serve a purpose for my own good one day."

The origins of New Empire go back to 2005 when Fowler, Kneale, Lane, Cairns and Sam Walker (bass) began playing gigs around the Sydney area. This led to appearances at the Black Stump Music And Arts Festival and the Big Exo Day. Their debut album, released independently in 2008, was 'Come With Me Tonight'. The following year the band found themselves opening for CCM hitmakers Relient K and in 2010 they took part in the Youth Alive tour with Hillsong United. Throughout April 2011 New Empire toured Australia as a support act for mainstream hitmakers Good Charlotte and then served as a support act for Switchfoot at their Sydney show and for Owl City on his tour of Australia.

In 2011 the band released the 'Symmetry' album. Said Jeremy, "We recorded everything over a three month period in a studio called The Grove Studio over a period of three months. Since then, I've started my own studio, and so we got to spend as long as we want on it without having to pay per day in a big studio. We got to fine tune absolutely everything that we wanted down to the finest details, because it wasn't a race against the clock or against our budget."

It was a long, hard haul recording 'In A Breath'. Said Kyle, "For us this album is extremely personal. We went through a lot in the process of this album, from losing loved ones to relationship breakdowns. The title track for the record speaks of the eternal aspect of loss. That even though someone is no longer a physical part of your life, there is still hope that you will see them again and that time is only in a breath. We hope that people can take this away and realise the hope that can be found through hard situations."

In an interview with fervr.net Jeremy was asked the simple question why is being a Christian worth it? He responded, "For me just being intimately connected with the source of all life is irreplaceable. My relationship with God is just the number one, the centre of my life, it's the compass. I feel that he just has me in his hands and it doesn't matter if I stumble or if I fall or if I'm doing good or how my emotions are going, he's just that constant steady rock that never changes. Everything else in life can change so quickly and we know that being in the world, things can be here one day and gone the next, but God is the thing that just stays constant and his love is the only thing that can actually really satisfy us to the point of overflowing."