Newworldson: The Canadian band reflecting the golden age of soul 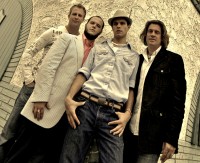 Some critics have already dubbed the music of Canadian newcomers Newworldson "speakeasy gospel". But whatever pigeonhole is applied to the rhythmic blend of '60s style soul, '7os style funk and '90s style jam rock, one thing is clear, the pundits are predicting big things for singer Joel Parisien, guitarist Josh Toal, bassist Rich Moore and drummer Mark Rogers. Influential US trade magazine Christian Retailing, when writing about their 'Salvation Station' album (released in the UK through Fierce! Distribution), even went as far as to say, "If this record is not nominated for a Grammy next year, it will be a shocking omission, it's just that good."

Joel Parisien told Christianity Today how the band from Toronto first came together. "As working musicians, we all jump at the opportunity to get paid to perform our own music. A couple years ago, drummer Mark Rogers called me and asked if I would be interested in bringing original material to this little jazz club in Niagara and start up a weekly Tuesday gospel music night. He had been playing with local bass player [Rich Moore], whom I had never met, and we were originally going to be a trio. But at the time, I was talking to guitarist [Josh Toal] about getting together to play before he returned to Montreal to study. So he sat in that night without a rehearsal, and we all met at that first gig. By the end of the night, we knew we had something special and Mark insisted that we kidnap our fourth member.

"We never intended to start a band; it was originally just an opportunity to get paid and shake things up a bit. I have to admit that part of the appeal in the beginning was the opportunity to deliver an uplifting, spiritual message to people who might never set foot in a church. It's important to note that we weren't trying to sneak up on people; it was clearly billed as a night of soul, funk and gospel. I think what helped in the translation was the mixture of original tunes with familiar soul and Motown standards by some of our favourite artists, including The Staple Singers, Bill Withers and Stevie Wonder. By the time we were a few months in, we had three sets of predominantly original material and a regular audience of 50 per cent Christians and 50 per cent non-Christians. Viewing it as a form of outreach, our church - Southridge Community Church, which is very seeker-friendly and non-denominational - was very supportive. Our weekly Tuesday night always sparked some great conversation, especially since our lyrics are obviously Christ-inspired and not veiled in cryptic metaphor."

Joel told the jesusfreakhideout website about Newworldson's head-spinningly eclectic music style. "Though the Newworldson sound is an amalgamation of each member's musical influences, the foundation is soul music. I grew up listening to big band swing (dad's a musician too) and then later on I got into electro-pop and hip-hop. Mark's been playing in a Motown-inspired funk band for 18 years. Growing up, Josh was something of a guitar prodigy on the blues circuit and later formed a ska/reggae band with his high school friends. And as a bass player, Rich has been a part of everything from indie rock bands to jazz trios. But like I say, it all comes back to roots music, to soul music." 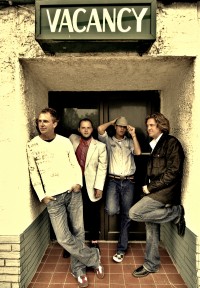 In 2006 Newworldson recorded an independent album. That in turn attracted the attention of Inpop Records who eagerly signed the band. The resulting 'Salvation Station' album is already picking up US radio play with the song "Working Man" catching many ears. Said Joel, "It's one of my favourites for two reasons. One, it's the most fun to play live; and two, as a song, it combines all the aspects of the Newworldson sound: the '60s and '7os influence, Josh's guitar sensibilities, Rich's upright AND electric bass playing, a little beat-boxing. It's high-energy and danceable and most of all, the lyrics tell our story."

Another song standout on the album is "Sweet Holy Spirit". Remembered Joel, "At the end of one of our tracking days in the studio recording this album, I was standing in the doorway to the control room listening back along with the guys and our co-producer Justin Koop. Suddenly I felt led to go and sit behind the piano in the isolation booth. I had these chords in my head so I started to play what I was hearing. The only lyric I had was 'If pride is my prison, then Grace be my key. . . sweet Holy Spirit, come rescue me.' Mark came in to the room and asked me if it was an original song I was playing. I said, 'I guess so. . .' to which he replied 'Good! We're recording that tomorrow.' When we came in to track 'Sweet Holy Spirit' the next day, Josh and I barely had finished lyrics. We decided to squeeze all of our instruments into that tiny piano room to preserve the inspiration. We recorded three takes, I believe, of us all playing and singing together. Each pass had slightly different words because the song was so new and protean. We ultimately went with the second take because of the vocal performances."

One song on the album the band are continually being asked about is "Citybus Love Song". With its quirky kazoo solo it's certainly an attention grabber. Joel recounted the song's origins, "Very late at night, or maybe I should say early in the morning, I was waiting for the bus to take me from one end of the mega-city in which I live to the other. Call it a quirky little urban-inspired devotional I wrote over the course of less than 24 hours and two trips on the bus. I don't have a car."

After signing with Inpop, Newworldson went on a major tour of the US last autumn with the label's big hitters the Newsboys. Joel admitted it was quite an eye opening experience. He said, "When you're used to playing in front of 100-1000 people in clubs and churches, making the transition to playing in front of thousands of people is humbling to say the least. We had to learn arena chops, which meant more than just getting used to in-ear monitors. We had to find new ways of performing that would make even the people in the farthest rows feel included. Peter Furler was very encouraging after our first couple of shows. He came up to us and said, 'You've got them, I can see them wiggling in their seats. They're all waiting for you to give them permission to get up and move!' All the guys in both bands, Newsboys and Kutless, are fantastic people, funny, supportive, and it wouldn't feel right if I didn't mention how great the crew has been as well. I think our favourite part of the tour has been getting to know all the fans at the end of the night. That feeling of community is so important when you're 800 miles from home." 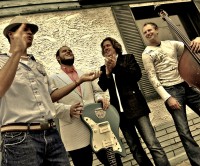 As well as their exhilarating retro soul music, the band's name is also attracting considerable interest. Joel explained its origins, "It's all about history. The Americas were called the New World by European explorers. The same explorers that wiped out indigenous peoples and imported African slaves. The same African slaves, robbed of their own language and talking drums, who appropriated the tongue of the slave drivers, the saxophone, the guitar and the three chords of Celtic folk music to create the blues and gospel. Soul music is unique to the New World but because it's rooted in suffering, oppression and deliverance, it has a passion that is universal. The name Newworldson is multi-layered though. To Christians, the 'Son' part is obvious. The 'New World' part alludes to Revelation 21."

Journalist Spencer Priest asked Joel what God has been teaching him recently. "How to not be a lip-service Christian. How to talk less and to let my life be my message, which is incredibly hard to do. How to not say one thing and be doing another. Some people struggle with surrender and trusting that God has a plan; that part's been easy for me. My problem is knowing that in my partnership with him, I have work to do too. It's not all sit back and enjoy the ride."

Wow! What a beautiful song Sweet Holy Spirit. The band sounds awesome. Its a new an usual coming from yound white men. I like it is radical. Praise God for there ministry. May God continue prospering them in a special way. I already download the song in my phone for 99cents. I could here it over and over as many times as I want. Very beautiful message.

Newworldson is my favorite band of all time. Live, they're the best! Saw them at Kingdom Bound NY and Funkfest near Toronto!

They ARE a superb band. Saw them supporting the Newsboys here in Medford 2 weeks ago and they were awesome. They are even better live than they are on record.