A big hit at this year's Spring Harvest, American singer/songwriter NICHOLE NORDEMAN is rising quickly up the US CCM ladder. Ruth Dodd reports. 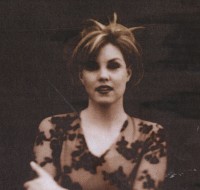 Anyone who was witness to Nichole Nordeman's stunning performance at this year's Spring Harvest will know that she is much, much more than simply a product of Nashville's CCM hit-making machine. Her debut CD 'Wide Eyed' demonstrated she not only possessed a voice which could squeeze the maximum emotion out of the image of her emotive lyrics, she can also write exceptional material which goes way beyond the standard sloganeering of American CCM.

After entering and winning a competition sponsored by the Academy Of Gospel Music Arts, she gained a record deal with Star Song. The irony is that due to the high entry fee Nichole almost didn't enter. However, she soon realised how worthwhile the weekend was. "It was not just a competition, it was a whole weekend of seminars and workshops and classes designed just to help you sharpen your skills. I thought it would be a great opportunity to meet other writers and get some professional advice on how to become a better writer. I had no plans at all for this to expand the way it has."

After writing 12 songs before she won the contract with Star Song, Nicole heeded advice from those around her. "They were so personal, they were journal experience and lacked a great deal of skill and craftsmanship and so I really started over. All the songs on this record were really written and recorded for this record, or at least during that time. I would go to the A&R person (John Maze) at the label and play something new, and with incredible love and gentleness he would say, 'I think you've got something better there - love the idea but let's work on the craftsmanship, let's continue to work on the lyric or let's come at it from a different angle' and just really gently pushed me out of my comfort zone."

On being asked about the recording process it seemed that Nichole used a rather different technique than that of other bands. "We didn't really have a list. So many people say, 'We're not going to start recording until we have a list of the songs that are going on the record.11 was writing as we recorded and we would just become inspired and not get panicked about deadlines, and try to write honestly and with authenticity, and sure enough the Lord really gave us some unique things to talk about."

This unorthodox technique seems to have worked. The album is truly inspirational/On being asked which track she felt was most successful at looking at the Lord, Nichole says, "The track 'Who You Are' really acknowledges that there is more than we could ever begin to comprehend in our tiny human brains, and that God will not be categorised, labelled and stuck in a file somewhere for our easy accessibility. Also the track To Say Thanks' talks about how quick we are as Christians to immediately blame anything, that hurts or feels uncomfortable, on the enemy's presence. We give glory to the Lord for anything great and maybe don't stop to consider that the difficult moments are a part of God's plan. They are not necessarily part of the enemy, but they're lessons sent to us from God."

Nichole's new album is primarily about honesty, she is honest about herself and portrays this in her music. One of the most moving songs on the album, "Wide Eyed" was inspired from time spent in Hollywood, and the honesty within it is truly astonishing. "Having lived for about a year in Hollywood, I was forced - to come face to face with many diverse people every day. I was surprised and embarrassed by the sheltered life I'd lived until then. surrounding myself mostly with people who were like-minded and consequently, safe to know. I really had to come to terms with my readiness to judge, to laugh, to dismiss those who threatened my sense of normality. And it made me wonder....how would I have reacted if I bumped into Jesus in Los Angeles? "Nichole describes her album as, "The bare bones of Christianity, not the shiny, polished Christianity." She is very conscious that people need to be more alert and aware about their Christian faith through personal experience. "My life had been pretty much that of a cookie-cutter Christian. I never really experienced a relationship with Christ. I did all the 'do's' and didn't do all the 'don'ts1. It was just-add-water-and-stir." However, after the divorce of her parents when she was 18 and the negative reaction she and her family received from the community, she quickly learned the realities of life as a Christian. She now seems very clear about what she wants to obtain through this album. She has one very clear message to give.

"I want to say stuff to people who need to authenticate their faith and shed the skin of surface Christianity. There is so much freedom in knowing that I'm really bad at things. I want to give people the permission to come out of a pseudo-Christian closet and come into the real thing."

With her debut album now behind her, Nichole is looking to the future, to what she hopes to achieve. "I would hope to be aligned with reading and thinking beyond Christian confines. I hope that I will be a Kindred spirit in wanting to push outside of those parameters. Having been guilty of the same thing for a very long time in my own life, being comfortable and content to stay within the safety of what people are telling me to read and listen to, I can certainly appreciate that it's hard to breakout of that box. I know that I need to look at Christ through a different window or from a different angle. That is what I hope for the future, it's just so important to where we are culturally."

It can't be denied that Nichole Nordeman is one of the most gifted new artists to be found in US CCM. She knows what she is talking about and is not afraid to speak, or in her case sing her mind. This is a woman on a mission and her mission is to convert people to the true version of Christianity.