Nina Astrom: Finnish singer sketching the landscape of her soul 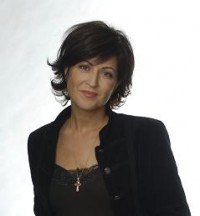 The haunting turntable hit "Faithfully Yours" brings back into the spotlight singer/songwriter Nina Astrom. In her Finnish homeland Nina has long been a popular figure and though the years have long passed since she recorded in Nashville and was being tipped as a CCM hitmaker, her lilting folkish pop voice with its touch of jazz and her elegant piano playing has found a receptive audience in Finland with both Christian and non-Christian audiences. As she said, "In my thinking there's seldom that 'Christian/non-Christian' separation. I sing about things that are important to me, the most important being God's grace in Christ. I've come to see that everybody has the same need of love and forgiveness and I'll sing to anybody who wants to/dares to listen. A lot of times this would be people who one way or another have come to the end of their road and realise 'there's got to be something else...!' This means churches, festivals, cafes, concert halls, prisons (a lot), slums, posh venues, a variety of TV and radio programmes. I guess you could say that to me it's one of the greatest pleasures if I learn that someone has accepted Christ in their lives somehow in connection with what I do. At the end of the day all of that is God's work and I trust him to do the job."

Nina's recording career began in 1992 when in Finland she recorded the 'Person 2 Person' album but it was the following year after Julie and Buddy Miller were visiting Holland and heard Nina's demo that a plan to take Nina to Nashville to record emerged. In Nashville with luminaries like Buddy and Julie Miller, Phil Keaggy, Buddy Greene, Wes King accompanying her, Nina recorded 'A Matter Of Time' for Word Records. Two years later another Nashville produced album, 'Moods', was released. Commented Nina about her Nashville period, "At that time we discussed the possibility of launching the album in the US as well, but came to the conclusion that we're not going to try that. At that time our daughters were small and doing pretty much anything at all in the US would have required an extensive time away from home; this was something I didn't want to do. Working in Europe and Finland was more 'doable' from that perspective."

Throughout the '90s Nina continued to tour around Europe and in Holland built up a considerable fanbase. So it was in 1999 that the singer/songwriter cut the first of four albums, 'A Friend', in Holland helped out by such Dutch Christian music favourites as Ralph van Manen and Luca Genta. In 2000 Nina released 'A Little Bit Of Love' album tying in with her representation of Finland in the Eurovision Song Contest. Also that year she released 'Vierelle Jaat' (a Finnish language version of 'A Friend') and in 2001 an acoustic style Christmas album, 'Merry Christmas Jesus'. In 2003 Nina recorded an album in Finland, 'Real Life', mainly featuring the lyrics of her long time record producer Gerritt aan't Goor with Nina supplying the music. Finally in 2007 she recorded 'Landscape Of My Soul' with the singer producing from which came the turntable hits "Faithfully Yours" and "In Your Hands".

Nina spoke about recording 'Landscape Of My Soul'. "It was a rollercoaster - as anybody recording their own material and heavily involved in the production themselves know: one day you think, 'Yes, this is what it should be!,' the next day, 'Who's gonna listen to THIS?!' Lyricwise I was a little hesitant at times whether I should be publicizing such personal stuff; but eventually came to the conclusion that usually what we think is very personal is actually pretty universal." 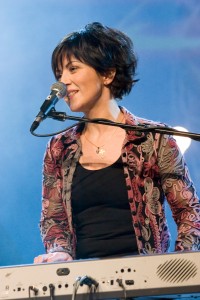 Nina is married to Benni and has two grown up twin daughters and is still very busy touring. She explained, "We live in the countryside (well, most of Finland IS countryside) faaaaar away from Helsinki which means that I spend a lot of my time in the car, on planes, etc. I guess I have just under 100 travel days per year on average. I'm a member of a Swedish-speaking (Swedish is the language we speak at home) Lutheran congregation in my home town. It is rather liturgical and at the same time also charismatic, and lots of things in between (being the State church it includes a lot of different expressions of faith). But as I travel a lot, I feel that an important part of my 'church' is my Christian friends and colleagues in and outside of Finland. We share stuff."

Nina has played a lot of concerts in prisons, in Russia particularly. She concluded our interview by talking about a spiritual lesson she has learned. "I'm a slow learner, especially when it comes to the most important issues; this means I'm constantly in one way or another struggling with and bit by bit learning that forgiveness is something that also belongs to me, and that this has consequences in my life. In prisons I've learned about freedom. Freedom is not tied to the fact that you are out of prison. I've met a lot of free people in prisons and vice versa. When Jesus makes you free, you are free."

Good to hear that Nina is still busy - some of her 90s songs are still on the UCB Inspirational playlist.