Nina Astrom: The singer and pianist from Finland

Heavily featured on the new album by NINA ASTROM are American CCM luminaries Julie and Buddy Miller. Yet Nina is from Finland not the USA. Peter Bate spoke to the singer/pianist. 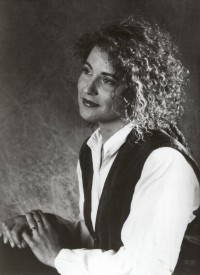 For most Brits, Finland does not spring immediately to mind in conjunction with 'happening' music. In fact, cringe worthy ditties from the Eurovision Song Contest are about the only exposure Finnish contemporary music receives this side of the North Sea. So the release of Finnish singer/pianist Nina Astrom's recording 'A Matter Of Time' by Nelson Word in February came as quite a surprise. Nina, a trained English teacher, a wife and mother, sings with a passion and integrity borne from perceptive observations of life and sometimes painful, personal experience. Due to her association with American songstress Julie Miller, an extensive European tour has been arranged which will include a two week stint in Britain during April. So how has all this come about for Nina?

"I had participated a couple of times in the Christian Artists' seminar in Holland," explained Nina, "and in August 1992 I was there again with my new album (the privately recorded 'Person 2 Person'). At this point I had given up my work as a teacher in order to be able to sing full time. Indirectly through the contacts there, in December I was invited to sing in a TV show in Holland. That's when I met the producer Gerrit aan't Goor. In the spring and summer of 1993 we seriously started to plan a new album with the material we had. On one occasion when Julie and Buddy Miller, whom Gerrit also works with, visited Holland, they were listening to a demo that I'd made. They came up with the idea that we could come to Nashville, to their studio, to record the album. The songs were polished, and in October we went to Nashville, recorded and mixed the album."

To have the Millers singing background vocals on your first major album is one thing, but the appearance of other CCM notables including Phil Keaggy, Buddy Greene, Wes King and John Schreiner was quite something else for the unpretentious Finn. "Every day there was a new musician who'd come and do his thing and it was like Christmas Eve for me! I'd say 'Who have you got today?...Oh, Phil Keaggy!' They were very skilful people but also so very encouraging. It wasn't like little me coming from nowhere, they really made me feel comfortable. It was incredibly laid back and the attitude was just great."

Pigeon-holing Nina's music is not easy, though her description of it as 'folkish pop with a jazzy touch helps a little. Strongly based on the ballad, the sound is spacious allowing for the domination of Nina's rich vocals. Nina sees her music primarily as a channel through which she can communicate meaningfully to others. "There was a Finnish journalist who said my music is a little bit like 'conversation at the kitchen table'; I want to be personal, I want to be intimate if possible. I try to sing about the things that I feel are important, it has to be something that I feel strongly about or have experienced, or that has some kind of eternal value for somebody," Nina explained. "Being a mother of two kids, you get your share of everyday problems. I remember one time in my life when it was really dark, I felt like the weight of the world was like a hand on me, with the problems of the third, and the first, world on me. It was like 'Why can't I do anything?' and it was a really tough time. I remember that year I just listened and listened to Martyn Joseph and I felt 'Oh, there is somebody else who seems to have gone through the same things - the agony and stuff' - it really helped."

Nina continued: "I don't know if it's because of my interest in language but I feel very strongly about words and how we treat each other with language. We say things like 'How are you doing?' and we're not waiting for the answer at all - it's just an empty cliche. I'm really sad about words losing their meaning."

The likes of Amy Grant, Michael W Smith and Petra are popular in Finland, but when it comes to home-grown talent, Nina is one of only a handful of full time Christian artists and is unique as a singer in the English language. However, her nationality has its advantages. "I come from a Swedish speaking minority in Finland. I don't come from the capital at all; I come from the bush -it would be like coming from the Isle of Skye," Nina observed. "The sort of 'nearness to nature' and the fact that life maybe is a little more tranquil in Finland than in the rest of the Western countries has probably given me a different perspective to the Western way of living. But this perspective also tells me how difficult we've made life for ourselves."

April's tour of Britain and appearances at the Crossfire, Summer Madness (Ireland) and possibly Greenbelt festivals should prove quite an experience for Nina as she has never played in Britain before. How will she be received? "I just don't know!" exclaimed Nina. "I am a Finn of course, but there's not so much of a language barrier. I can understand what people say so I don't feel so much of a foreigner. I'm being quite Finnish when I say 'I don't know' as we're not very sort of 'here-l-come,-look-at-me' by nature. People are a little different in Finland, even in secular music giving autographs is pretty rare - we always go for the understatement."

The support of touring partner Julie Miller, now an established CCM artist in America and Europe, should prove helpful. "I don't really know who is supporting whom! Probably I am supporting her. Before I met her I was listening to her new album and just crying. She's great, she really makes me feel like a sister, so to me it feels like we're just two sisters singing together."

Those who do catch Nina in concert will be confronted with a simple but key message. "I would like them to dare to take God's love seriously," said Nina. "There are so many broken people; I just hope that I will convey the love of Christ. It's so difficult to believe in grace, you always think that nothing comes free. I know for myself it's very difficult. So I'd just like to be there and say 'Please dare to believe that somebody really gives this free and then see what consequences this can have in your own life, because you have to be accepted first to be able to accept others.'"

The opinions expressed in this article are not necessarily those held by Cross Rhythms. Any expressed views were accurate at the time of publishing but may or may not reflect the views of the individuals concerned at a later date.
About Peter Bate
Peter Bate is a long established Cross Rhythms contributor living in the Midlands.