Noel Richards: A song-by-song rundown of his 'Dangerous People' album 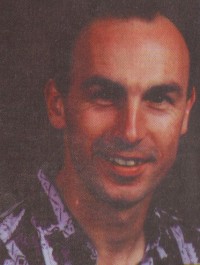 "Let Your Love Come Down"
My son and I jam together and I was listening to the result and I liked the riff we got into and I began to play around with it and it speeded up and I began to sing this chant and the phrase 'Let your love come down' came at the end so I thought I'd work on that. Trish and I sat down and thought about what we could write and we really want to see the love of God washing through the streets of our villages and towns and cities of this nation. It's an anthem.

"Keep On Praying"
All of us if we're honest feel that prayer is something that we often forget to do or do as a last resort or feel 'If only I prayed more'. I was talking to a close friend this week and he was saying, 'There are times when I just think, oh I haven't spent time with God today because I've been so busy.' And again one of the things we've been learning as a church back home is persistency in prayer. Often we say we've prayed about a situation and that's it but if you're taking medicine for an illness you just take it over and over again. Sometimes, we're not consistent enough in prayer. So it's a song which hopefully will get that inside us so that we keep on praying even when answers don't seem to be coming. It's a faith building song.

"I Do Believe"
The little riff came to me first of all and then we were having some teaching on communicating the Gospel and realised that John 3 vl6 just said it all so I tried to put it into a song and just make it as simple as possible. This is the wonderful story, Jesus came to save us. It goes down well live, it's the one people seem to grab very quickly because they can shout out that phrase 'I do believe'. Again it's getting the truth within our hearts which is an
important role which the music has to play.

"Dangerous People"
I was in Switzerland at a conference and I heard a speaker talk about the theme of God's dangerous people and she took the heroes from the Bible and the disciples and looked at what they were and what transformed them was God's power working through them and they were the most dangerous people on the face of the earth because they caused change to take place and they changed history. I thought that was a great concept for the album, for us to be God's dangerous people in these closing years of the 20th century, to do as much damage to the kingdom of darkness as possible.

"Come Out Of Darkness"
It's a declaration song and a bold upfront statement to those who are not yet Christians to come out of darkness and into the light. Again with this album we wanted it to be songs that didn't just help people to worship but songs that challenge those who aren't yet Christians to think seriously. It's dead simple and we also use it in concert to sing over a town.

"I Want To Be Out Of My Depth"
Another gem from Doug Horley! It has a remarkable affect on people as they sing it and express what is in their hearts towards the Lord. It came out of Doug sensing that with this fresh move of the Spirit, a lot of people were having to let go of the old and get into the new and they weren't sure what they were getting into. So he just wanted a song to encourage people to step out of their safe areas into Jesus' arms of love, they could allow him to support them, then there's a great feeling of security which is drawn from that. For me, it's easy to sing but then God says do it! It became a challenge.

"Last Generation"
I was driving home one night from Eastbourne and the radio was on. Tina was singing 'We don't need another hero' and there is a line in the song where she sings, 'Last generation' and God spoke to me. Clearly I felt God say to me to write a song about being the last generation and I thought (he groans), 'Oh great!' I grew up in the Pentecostal church where we focussed when I was a child on the return of Christ. I thought what do I write? I know we have a role to play in the return of Christ, hastening the day of the Lord so how do you write a song about it? The song says we could be the last generation. Once we've networked the nations with the Gospel then the end will come. It's an encouragement to keep spreading the good news because we could be the ones that do it.

"Love Songs From Heaven"
With a lot of these songs you get a phrase and the phrase that came to me was 'In this dark world our light will shine' and I began to see the stadium full of people holding up those little torches and lighters in the darkness and I just had this simple melody and I began to play it. The tune evolved and I sat down with my band and they said I sounded too much like something else so I changed it. Then we thought what do we want to say? Every time you martyr somebody the Church grows stronger and nothing can extinguish the light of Christ. The challenge is to us, will we be people who allow our light to shine in this dark world and play our part? Wayne Drain had the idea for the lone piper at the start. We took 18 hours to mix it in the studio. A few days later Les (Moir) came round with the finished mix. Trish, Les and I sat listening to it and we just wept. We thought, 'Wow! It's affecting us like that!' It does send shivers down my spine every time I play it.

"There Is No One Like Our God"
This is one of those last minute songs that happen just before you go in the studio. I played it to Les and he encouraged me to work on it. Very simple tune and words. I also had this phrase, 'God is with us' for months and months but I couldn't write a whole song. In the end Les told me to stick God is with us at the end but I didn't think it would work, but it works!

"I See The Lord"
That's a song which is really taking America by storm. It's one of the most popular songs and it's been used a lot at Promise Keepers. Chris Falson who wrote it is a good friend and I've recorded some of his songs in the past and we thought because this song has a proven track record in stadiums across America that it fitted in with the theme of the album. It's just a great worship song!

"Have You Heard The Good News"
A song by Stuart Gerrard which I wanted to put on the 'Warrior' album but it wasn't right at that time, but it was right for this one. It ties in with the theme of the album which is communicating the good news. It says to people, 'Hey! There's a saviour who can change your life.'

"You Are My Passion"
The tune came for that when we had one of our waiting meetings. I was playing my guitar and the melody came when I was playing for people to be prayed with so I quickly put on my tape machine and when I got home I played it for my wife and asked her what she thought. She had some words but thought I wouldn't like them. She read out the words and I broke down and cried so I said, 'I think that works!!' We put them together and in half an hour the whole thing was finished. I like songs like that and it's a very powerful song of intimacy to God.