Noel Richards: Talking through his song "There Is Power In The Name Of Jesus" 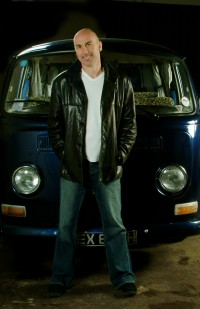 This song originated while I was sitting in the office, worshipping with my guitar. I was playing around a melody based in the key of D when the phrase "There is power in the name of Jesus" popped into my head. I thought to myself "That's a good idea for a song". At the same time, I got the music for that line. The tune was quite slow and I thought this was going to be a worship song. However, as I began to work on this raw idea and the lyrics and music began to take shape, it speeded up and evolved into a praise song.

When I had finished the first verse, I played it to my wife Tricia who felt it had potential. She is a vital part of the writing process and indeed helps me to shape up many of my songs. My next port of call was Gerald Coates, my close friend and colleague. He helps me with fine-tuning of lyrics and melody. Indeed, he checks the theology of what I have written to ensure it is sound. It was he who suggested one or two minor changes to the tune and the writing of a second verse. Having done all of this, I was still unsure of the song and whether or not it worked. I had been working on it for four weeks and was still not satisfied with it. I then visited Chris Bowater in Lincoln and asked his advice. He made constructive criticism of the song and helped me to understand what was needed to make it work. A few strategic changes to the melody brought the song alive.

As I began to write the song I became more aware of how powerful the name of Jesus really is. My aim has been to reflect this in the lyrics.

Jesus brought freedom to people bound in every form of captivity and we can see the same thing happen today.

Jesus' name is above every other name (Philippians 2 v 9, 10) and I wanted that fact to be the last line for each verse. The melody needed to reinforce this and that is why it reaches top E at the end of the word "higher".

Where the first verse has a personal application ie "We believe, we have called, we are saved!", the second deals with spiritual warfare. We are declaring that in Jesus' name "We shall stand!" As we speak the name of Jesus, it is like wielding a powerful sword, in terms of spiritual warfare. In writing the lyrics of this verse I took inspiration from Genesis 3 v 15 and Ephesians 6 v 10-18. All believers share in Christ's victory over Satan and his forces. Paul, in writing to the Romans, said that "The God of peace will soon crush Satan under your feet" (Romans 16 v 20 NIV).

My hope, having written this song, is that we really will live in the victory that Jesus has won for us. Finally, the acid test of a song is whether or not it works in the context of praise and worship. It has been an encouragement to me, to see people taking the song and using it. However, the proof that this song was worth writing came a few months after I had finished it. At the end of a meeting a lady spoke with me and explained that, as she sang the lyrics, she was healed physically. All the hours of writing were worth it if no-one else but her had been touched by God through this song.

The opinions expressed in this article are not necessarily those held by Cross Rhythms. Any expressed views were accurate at the time of publishing but may or may not reflect the views of the individuals concerned at a later date.
About Noel Richards

January 2014 and this song is still such a blessing. When it is sung, the intentions of Noel Richards are exactly those which I hold; that people will be set free from whatever it may be and truly realise that their is no other name that is higher than Jesus!