British worship leader Noel Richards is planning an event, Calling All Nations, to take place in the Olympic Stadium in Berlin in 2001. Tony Cummings asked Noel about his vision to take worship to the major stadia of Europe. 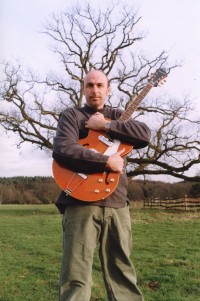 Everyone was tremendously affected by the Champion Of The World event at Wembley. How did you move on from this to start thinking of Berlin?

"A great pentecostal pioneer in America came up with his little phrase that he believed that the sporting coliseums of the world were not just for football and baseball, but for the last big breath of God. I really like the sound of that and everywhere I go people are talking about taking arenas and stadiums for Jesus. It was at Wembley Stadium just a day before we put on Champion Of The World that some friends gave me a letter and they said, look, we feel that there are three stages in Europe that we'd like you to give attention to.' One, The People's Stadium in Budapest, Hungary; two, The Olympic Stadium in Barcelona; and the third one, which really caught my imagination, was the Olympic Stadium in Berlin, Germany, the scene for the 1936 Olympics. And then I began to read about the stadium in a book that a friend gave me, and there was a big bell that was used to open the Olympics in 1936 and that bell now stands alongside the stadium. Inscribed on the rim of the bell are the words, 1 summon the youth of the world." When I read that, something just exploded inside my heart and I thought, 'Ah! That's the next stage of the journey, to invite, to summon the youth of the world, and the young at heart, to worship Jesus Christ the champion at the Olympic Stadium in Berlin!"

Everyone remembers the 1936 Olympics because of the way in which Hitler used the event as a kind of focal point for the forces of evil.

Do you really believe that Calling All Nations is going to make a major spiritual difference for good? "I really do believe that. It was one of the leaders in London called Philip Mohabir who felt that the event at Wembley Stadium would really pierce the cloud of darkness that is over London and over our nation. So that is what we're looking to see happen when we gather in Berlin. I'd love to see more than 100,000 people; maybe 200,000 people come together in Berlin to worship. Not just Germany but the whole of Europe will benefit and that, somehow, the cloud of darkness over Europe will be pierced, because when you get a crowd of worshipping warriors together, the sound of Heaven comes. That's what I'm in faith for."

I understand an actual date for the event has yet to be fixed. "I would like to think that we could get a date for this event at least by the end of this year. That would give the people at least 18 months to plan and prepare to be with us. Nothing happens without a battle and I think if we're saying we want to do something for God's Kingdom then the enemy has a strategy as well, which of course comes to nothing in the end because 'greater is he that is in us'. At Wembley they were saying, 'Oh! We can't commit to booking the stadium because we may be pulling it down and rebuilding it' Well, here we are almost in 2000 and they still haven't started pulling down the stadium, it's still being used! At Berlin what they want to do is, I think, to at the very least refurbish the stadium, but maybe even to knock it down and rebuild it or to preserve it as a monument or to put something up in the field next to it. So they can't commit to a firm date but in principle they're really keen to have us in the city. It's just a question of having to wait a little bit longer for the date. I would like to think maybe towards the end of July, the early part of August because that's a good time for everybody around the world."

Specifically, what do you want the readers of Cross Rhythms magazine to do in support of Calling All Nations? "Prayer is so important, we need just incredible covering in prayer for the whole team that's involved n organizing such an event, for all those who'll take part in it, for the event itself, that it will really achieve what is on God's heart. When you feel something prophetic' in your heart about an event it is very difficult to unpack. You can't say, Well, this is how I know it fits into God's strategy.' I just have a sense that Calling All Nations is part of God's strategy for Europe and for these days in which we live."

As well as Germany, I understand you've got a heart for Hungary and Spain. "Yes, I just felt prompted in my spirit to go to Hungary with those two friends who gave me this vision in the first place for Berlin. They've got a real heart for Hungary and in fact our church has just recently sent them to Hungary to be there for a while. We prayer-walked the People's Stadium in Budapest and said, You know Lord we see this place filled with your praises.' Funnily enough that's where the band Queen once played 'We Are The Champions'! So I thought it's kinda funny, here we are planting our feet in this place and saying, lord, one day.' And then Spain. In a sense, a lot of Spain is quite dark spiritually. But it would be great to say, Two years after Berlin let's do Hungary, then maybe two years further down the line the whole team of 100,000 worshipping warriors descend into Barcelona to pray for the Gospel in Spain. So that's a human idea but maybe that's something that God's inspired me with but I just sense that these stadiums will be used and they will be filled with the sound of God's praises."