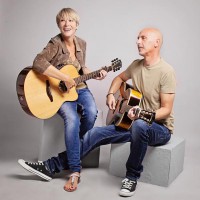 There can be few UK church goers who wouldn't recognise, and indeed sung, the worship song "All Heaven Declares". It was written by Noel & Tricia Richards. On a short tour of the UK recently the couple dropped by the Cross Rhythms studios and spoke to me. Here's what they said.

Tricia: Six song is perhaps a bit more accessible. It was a bit of an economic thing as well: six songs on a CD is half the price of buying a big CD, in an age when people are looking at their finances. Also, we'd only written six songs. The next six are coming. We're taking it in bite-sized chunks.

Tony: So this is a bargain price?

Tricia: A bargain price of Â£5.

Tony: What's the story behind the project?

Noel: We realised, after all these years of writing together, we'd never actually written a song for each other. What we've been doing the last few years is going back to our roots. When we lived in Plymouth, in the west of England, we were very much involved in writing songs that people on a journey to faith could listen to. The words "outreach concert" is something we hadn't heard for a long time, but we started to realise that there was an audience out there not hearing our values: they wouldn't darken the door of a church. So we started writing songs like that, and "Wonderful" is a song we wrote to each other. We'd never written a song to say, "We think you're wonderful." We're encouraging our audience, when they listen to this song, to be proactive and say to the ones that matter most to them, "Hey, you are wonderful. Thank you for being involved in my life."

Tony: But in the modern world we are up to our gills in songs expressing love.

Tricia: It is, but I think also, on this particular album, the songs aren't purely about love - although love seems to undergird and thread its way through everything. There are songs about love, life and loss. Love doesn't always have a happy ending; one of the songs on the CD talks about that. 1 Corinthians 13, the love chapter - it's not just a warm, fluffy feeling, it's more substantial than that. Hopefully in these songs we explore more than just one aspect of love.

Tony: How much are you able to bring the message of Jesus Christ into songs like that?

Noel: We're putting what we believe in, our values, into these songs - the things that we feel are really important, and which we find people agree with. There's a song on the CD called "Need To Love", and we started writing this song when we saw how people of different faiths treat each other. These days people feel threatened by the Muslim culture without really understanding much about it. We had a neighbour for a year, a young couple and the wife was a Muslim; we had great conversations and we had friendship. We began to think, if we can love our neighbour as we love ourselves, which is one of the central themes of Jesus' message, then we can put that into a song, and people are getting the values that we as Christians hold dear. So the song "Need To Love" is saying, "Let's not walk in fear and prejudice, but let's choose to treat each other as we treat ourselves." It's one of the major planks of Jesus' teaching in a song that hopefully everybody can understand.

Tony: Many years ago the Christian music world could be very prescriptive, with John 3.16 being shoehorned into every song. Did you ever encounter attitudes like that?

Tricia: Maybe not John 3.16 verbatim but perhaps, "If you don't mention Jesus in a song, what's the matter with you?" I can't remember who it was - there's a famous quote about using words, that we shouldn't have to use words for everything. We encounter a lot of people who we consider are on a journey to faith; even ourselves, we're on a journey in our faith. A lot of people aren't going to come into church, they're not going to start a conversation about Jesus - we're surprised when people are very open to that - but we hope to make a connection. So we don't come across a lot of people like that now.

Noel: No, I think it's changed. When we were younger, it was a battle to get guitars into churches.