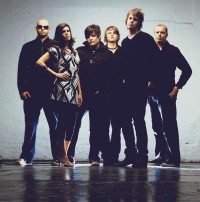 Dave: What is the relationship between One Hundred Hours, The Factory and YWAM?

Tre: The Factory is a ministry of Youth With A Mission that is basically a group of young people who long to see a global spiritual awakening in these days marked by Christlikeness. We started The Factory in 1998 out of a real hunger to see God move in this generation and in this age. We didn't really have a plan, except to get together a group of young people who were hungry for the same thing and seek God as to how we were to move ahead. So five of us began in March of '98. One Hundred Hours began by accident really, when I was asked to lead worship for youth Cell-Church conference in late '97. I called a few friends and we led the worship. We were invited by the conference speakers to come to California and do a small tour. We said we'd have to decide if we were a band first! Of course, we did feel that God was leading us in that direction and with The Factory beginning in the midst of that time it was a natural relationship between The Factory and One Hundred Hours, particularly as I lead the band and was part of the leadership of The Factory as well. The way that is has evolved is that although Jono (bass) and Paul (drums) aren't full time with The Factory, they're full time in the same sort of vision...Jono with Fusion, a university cell movement, and Paul with YWAM in the East End, working with young people there. We all see the band as a tool that God has given us to work towards this dream of an awakening and a movement of Christlikeness, rather than the band being the main point or the end result as it were. So typically, when people ask The Factory to do an event, they're getting the band and the The Factory team...teaching, speaking and worship.

Dave: Your website - the-factory.com - has plenty of information regarding activity in 2000. What has been happening with the band and with The Factory this year?

Tre: We've been pretty bad at keeping our websites updated due to our schedules and such, but that should be changing soon! Both One Hundred Hours and The Factory have been very busy this year. We brought in the New Year at a festival in Norway called Consecrate, which is a three day event focused on holiness and the consecration of our lives to GodÂ¹s purposes. We were there with about 500 young Norwegians with One Hundred Hours leading the worship and members of The Factory teaching. Then, we headed to Australia for a two week tour leading worship and teaching in places as varied as metropolitan Sydney to a tiny place called Bourke way out in the outback where we did an acoustic set for about 30 Aboriginal kids. We headed back to the UK for a week and then left for a two-month university tour in the United States. We travelled all the way across the USA doing two and three night events to raise the call to Christlikeness and to lend our voices to the many calling for holiness and revival in these days. We were involved with 16 different university ministries in the States during that time and with crowds that ranged from 14 at UNC Greensboro to 3000 at BIOLA in Los Angeles. It was an amazing time as we saw the desperate hunger for God at so many different university campuses. Just five days after our return we headed to Spring Harvest to lead worship for the Evolution venue at Minehead for two weeks. After Spring Harvest I headed over to Soul Survivor in Holland to teach some seminars on worship, revival and holiness and we wrapped up our five months on the road with a trip to Jersey to lead worship for the very first Jersey Worship Festival. After a six week break, we headed to Finland for another Consecrate event and we are presently hosting a six week gathering called Prepare that began on July 8th and will finish on August 18th that is focused on leadership, revival history and especially Christlikeness. About 125 or so young people from 24 nations have joined us here in Harpenden for this time. One Hundred Hours is leading much of the worship and we have speakers like Loren and Darlene Cunningham, Joy Dawson and Winkie Pratney as well as Factory team members bringing input.

Dave: How do you see the band developing in the future?

Tre: That's been the subject of much prayer and discussion lately! Jono, Paul, Tori and myself all still see the band as a tool to work towards a movement of young people in every area of culture and society that is marked by Christlikeness. That is a vision that God has planted in the hearts of so many people in these days...we're just thrilled to be a part of such a dream. As doors open for the band, we just want to see Jesus lifted up ever more and see more and more young people consecrate their lives to becoming and doing whatever he has on his heart for them.

Dave: Have you got any gigs between now and the end of the year?

Dave: The Factory and One Hundred Hours could be described as musicians, worship leaders and evenagelists. How would you describe yourselves?

Tre: We really don't consider ourselves musicians as much as people who long to know God more and see others know him more as well. We really want to see worship as our way of life, so that when we're on a stage, it's just an extension of our normal everyday lives of worship of Jesus.

Dave: There is a passion and energy about the album 'Lift' that obviously comes from your relationship with God. You seem to "live life to the full" as God promised. Why do you think more people have not taken God up on this offer?

Tre: Passion is something that doesn't depend on feelings and circumstance. All too often, we mistake a strong feeling or a strong emotion as passion. Passion does often produce strong feelings and strong emotions, but real passion for Jesus is marked by the way that we live regardless of how we feel and what our circumstances are. As a band, we're really learning to stand on the truth of the amazing promises of God no matter what we're facing or what we're feeling. We really want to allow the truth to change our feelings rather than allowing our feelings to change the truth...and the truth is that real life is only in Jesus. As we have begun to see that more and more, the only appropriate response is to worship with our whole lives and not just our songs. Unfortunately, the world we live in is so based upon feelings and what we can see or touch or buy...image becomes everything, regardless of substance. Breaking free of that pattern is difficult and unfortunately many people who so badly want "life to the full" are seeking it in a feeling or an experience, rather than in the person of Truth: Jesus.

The opinions expressed in this article are not necessarily those held by Cross Rhythms. Any expressed views were accurate at the time of publishing but may or may not reflect the views of the individuals concerned at a later date.
About Peter Small
Peter Small is the journalistic pseudonym of musician Tim Thwaites.

Gone but not forgotten.