Onehundredhours Live At The Rigger, Newcastle-under-Lyme 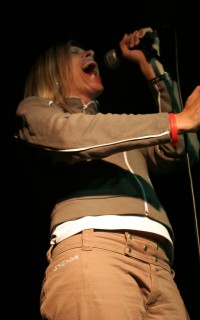 The Rigger is a rock pub in Newcastle-under-Lyme with its own unique vibe and a reputation for being a good venue for rock acts seeking to get established. Having spent some time earlier this year opening up for Daniel Bedingfield, Onehudredhours are spending most of this year going back to their roots and playing the club circuit and this is their first ever gig in The Potteries.

Local Stoke band Petalhead started things off with a short set of original material. With a solid rhythm section and Tim Davies adding some great textures on guitar, the band demonstrate real promise. Singer Becky Brown's voice crowns everything. It is stunning, although at present she seems a little awkward on stage. Great when she's singing but needs to work at winning over a crowd and maybe tell us a little about the songs. Talking of songs, musically the band seem close to being ready to record except for one thing. Their set lacked any material that stuck in the memory and really fired me up. Petalhead would be advised to wait until they write a couple of killer catchy songs to build a recording around. Even having said that, I can't imagine it'll be long before they'll be live guests on Rimmerama.

Finally the band formerly known as Chump make it onto the small stage and kick off with a short snappy rocking version of "Taste And See" that immediately sets the scene and reminds us that worship lies at the heart of what Onehundredhours are about. Tre Sheppard is an easy going frontman and his warm personality quickly connects with the audience. He confesses to being American but claims that he heard about British weather and cooked breakfasts and decided to move over here. Having seen the band play on the Bedingfield tour, it's luxury to hear an unhurried full set from the band with a few new songs thrown in. In fact the new songs really highlight how much this band is improving. Tre introduces the first new song of the night, "I Can't See Myself" which is rooted in some chunky guitar work. The rhythm section of drummer Paul Baker and newly married bassist Mark Sampson really shine throughout the gig adding a huge punch to the band's live sound. Really, their albums don't yet do the band justice!

A significant portion of tonight's set is from last year's 'Stronger Than My Heart' album. The songs were written when Tre was at a low point in his life and clinging onto God. I often wonder whether it is this powerful mixture of stark honesty, brokenness and hope which makes them so powerful in a live setting. It's as if the vibe of the song and the earthiness of the lyrics pull at the heart of audiences, ministering hope. The next song in the set, "I Believe In Love", is a great example of this where Tre sings of a hope which is to be found in the midst of despair. The song has one of those pretty melodies which is impossible to forget. Tre takes some time out to thank the crew at The Rigger including the pub's landlord Buff. He encourages the audience to give Buff a shout so the "Buff" cheer is raised. Tre jokes that Buff is probably weeping in the back and then adds humorously, "Or maybe he'll come out here and beat me."

"C'mon boys," Tre exhorts his bandmembers before they launch into the punch-the-air rocker "River Wide". You can feel the band's pounding rhythms hit you like a body blow in the chest and yet it isn't overdone. Tre's wife Tori Sheppard's vocals add their usual passion and soul to the band's sound as she sings her heart out. Then suddenly the intensity dips as Tre sings the invitation, "Won't you come to the river and bring your pain. Come to the river and find grace". It's a transcendent moment. Another new song "She's Already Gone" has an almost '60s feel to it with a neat, memorable, catchy chorus to die for. Tre takes a moment to introduce the band and his guitar tech who he nicknames Johnny Rotten for some reason! He also changes electric guitar for acoustic and sings a solo version of "Dear God".

During 2005, the band have managed to raise around Â£16,000 for the charity engagehivaids.com which works on projects in Africa. He points the crowd towards the table where they can buy red wristbands for Â£2 to support the work. Tre is passionate about the issue and even before the outbreak of compassion that has led to Live8, the band were working to raise the issues amongst their fanbase. Amazing how a couple of quid can change lives. Earlier when we were chatting on Rimmerama he reminded listeners that we don't have to be rich or famous to make a difference and with his band he's living out the vision to see a changed world. He introduces another rocker "Light It Up", a song that he wrote about the issues.

"O Love My Love" comes next and it has become something of a crowd favourite at the band's gigs. It starts in a deceptively low key fashion building to a level of intensity built on Baker and Sampson's rhythms and Tori's vocal stylings that connect at a gut level. Within the swathes of sounds that fill the room, the powerful rhythms and Tori's unearthly vocals, there is something beyond the music itself that fills the soul. The band take it down for one last quiet song and play "Make Me Okay". It's another song that mixes doubt and questions with a cry to a God who is able to deliver us from the doubts and the song is strongly fused with a life changing hope.

Onehundredhours close their set with the radio hit "King Of Every Heart" which seems to draw together the threads of every other song of the evening leaving on a high. This is the perfect rocker and a reminder that beyond the tight passion of their live performance The Hours are pointing us to something greater.

"Your love is bigger than our fear
Your grace more powerful than sin,
Your heart is open wide to everyone
And you let every captive in"

It's an epic song of a faith that is bigger and stronger than the struggles and a powerful close to the set. And then they were gone! No encores but plenty of satisfaction as once again the band fulfil their three goals of Faith, Hope and Rock'n'Roll.

i was at the harvest festival in butlins Minehead i listened to this band and thought they were great there music, lerics, everything.
there new album tracks are really magic theyr'e amazing rock band x