Onehundredhours: Rock worshippers who are tearing down walls

Rock'n'roll worship band ONEHUNDREDHOURS insist that rock music has its roots in things of freedom. They spoke to Mike Rimmer. 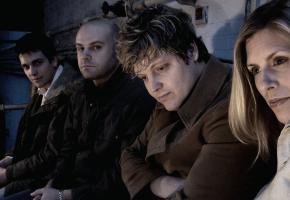 Glenn Lamar Sheppard III is a warm and friendly American who just happens to front a really cool British band. Known to friends and family by the much more rock'n'roll Tre, to avoid confusion with Glenn Lamar Sheppard II, he is standing around the Skyline Pavillion at Spring Harvest Skegness and gives off the air of a man who seems to know everyone. The adage that there are no strangers only friends you haven't made yet could be his life's motto. Tre is also a little mischievous. Although blessed with a rich southern American accent, he tells a member of Butlin's staff that he is from Wolverhampton! He confesses, "She did look puzzled and slightly frightened."

Tre, along with his wife Tori as backing vocalist, drummer Paul Baker and bassist Mark Sampson make up the heart of Onehundredhours and the band has made a name for itself with the critically acclaimed independent album 'Lift' and the 'Cardiphonia' mini-album. The release of 'Stronger Than My Heart' shows the band spreading their musical wings and creating a bit of a masterpiece. Tre is quick to point out that Onehundredhours really is a band effort and that right from the start they had a selfdeprecating sense of humour. Originally thrown together simply to lead worship at a YWAM conference the band immediately got booked to play somewhere else even though they had played without a single rehearsal. Tre remembers, "We called ourselves Chump. The enlightened Mr Baker thought of that name! It was really because it was just a bit of a joke, we were just having some fun. As it just kept on snowballing and growing, at some point it just seemed a little ludicrous to have that name."

So as the band's success grew they got a more serious name from the Wyn Fountain book The Other Hundred Hours. Tre happened to be reading it at the time. The book talks about really impacting the world and it seemed like an apt moniker for a group of people wanting to shake things up. He explains, "Wyn's book pretty much states that the average, even a really conscientious Christian, can't do more than about 12 hours a week with church stuff. That leaves us with a hundred hours in our lives if you take 56 hours sleep out of the 168 hours week. His whole point is that THIS is the time the world gets changed. That's what God's looking for. He's not looking for a slice, he's looking for the real thing."

It doesn't take long to discover that Onehundredhours are really passionate about this stuff. Tre continues, "I think our heart as a band is really simple; we long to see a movement of young people in society who are called to look like Jesus. We're called to be 'in the world and not of it' and unfortunately we've kind of gone the other direction, we're of the world and we're not in it! We actually need to get into society with the life of Jesus bursting out of us. Education, politics, entertainment, anything, you name it! And not just as little forays but actually really living there to see the world changed. That's really our heart as a band fundamentally."

Harpenden may seem like an unlikely place for a worship band to emerge but that's where Onehundredhours are based where they live as part of a YWAM community. That community and the band's friendship with each other are probably more important to the band than the music. Paul Baker shares, "We want to create community and family. If we can model it in a band setting, then it will speak volumes to other people. It's a place of healing, friendship, openness. It's really worked, especially in the last couple of years." 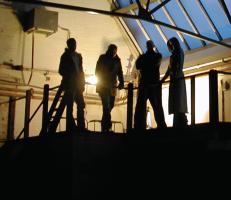 Over the years I have met hundreds of bands and artists and Onehundredhours are strikingly different. They don't operate as a conventional band hungry for success; their goals are not the publicity game. Tre confesses, "We really want to see something different. We're a rock'n'roll band and we worship the Lord but at the end of the day, we're probably more hungry to see a movement of young people. I'd happily sacrifice the hours in what we do as a band if we could see that happen. We love what we do but we're going to be mates and be friends together because of our vision not our music."

Tre thinks that the band's radical approach is because they have been launched from a discipleship community. "We call it a multicultural network of friends following Jesus, trying to see him in every area of society and culture. It's called The Factory, this little thing that we do. I think the heart of The Factory has always been, 'How do we actually reach into society?' I think that for us, as a band, it's very easy just to become 'professional Christians'. Especially with the opportunities that we get. We get a lot of big stages at Christian events and we're asking how we actually can change society. At the end of the day, I look at the moves of God that have lasted and still have great impact. The Wesleyan movement is still shaping society to a certain extent and it's because I think the Wesley brothers and their father really wanted to shape society and they lived in such a way to do it. So for us the band is a sideline gig in a way. We love it but we only see it as a key way God has given us a platform to speak into people's lives."

The band have already begun to take action, as Tre shares: "We've just started a new charity called engagehivaids.com in partnership with the iThemba AIDS Foundation. It's basically a web-based community and it offers a texting service. It's just a way to give donations to the Aids crisis, the pandemic in Africa. Three times a week people receive a text message. One of the text messages is a 'fact', just to keep you educated. We really want to educate people with the facts. Then there's a devotional thing that comes in to really help us to engage with the pandemic. Then a prayer. So hopefully the whole text community can be praying together this prayer. It's Â£6.00 a month. About Â£1.00 goes toward running it and the other Â£5.00 goes to feed, clothe, nourish and care for an Aids patient completely. So it's a tiny way for us to take this stuff we sing about and actually get out and shut up and live it a little bit. That's always been our hunger. I guess when I'm talking about it now it sounds all noble but really for us, the daily challenge is, 'How do we do it?' It's easy to talk about it in a magazine interview with Mike Rimmer but it's quite different when you're out there. Nobody cares if you're a Christian, they don't know, they don't want to know about how many albums we've sold or if our worship songs get sung at church. They want to know if we're going to shut up and actually love them with our lives. I think that really is at the heart of what we do. That's why it's so important to us."

Onehundrdhours clearly love being together and the new album explodes with a passion and creativity that makes it stand out. One of the reasons that the band is so creative and edgy is that fundamentally they don't care whether the music is successful, they simply love to make rocking worship and they take risks. Freed from commercial fetters, the results are astounding! Drummer Paul Baker responds, "I'm enjoying what we do. We get to play in Student Union bars, we get to play at Soul Survivor festivals. For us, we count it a privilege and we don't take it lightly, yet we want to have fun in that midst as well. So we want to get across the message and the sort of thing God has given us to bring to the mix but at the same time, we want to enjoy it and make the most of every minute of it."

To be honest listening to the album, I draw personal comparisons with America's Rock'n'Roll Worship Circus, another worship band that knows how to rock hard. Tre admits, "We're a rock'n'roll band. I would say we feel called to three things. We don't say the rock'n'roll thing because it sounds cool, we feel called to worship, to prayer and to rock'n'roll. We feel equally called to those three things. We felt that from the Lord. Rock'n'roll is not something the Devil created because he's not creative, it's from the Lord. Its roots go back to the Negro spiritual songs. Songs of freedom, songs that actually say, 'Let's set our eyes above the oppression. Let's believe in freedom, let's live for it!' Rock'n'roll has come from those roots, so its roots are in things of freedom, its roots are in tearing down walls and breaking through things."

He continues, "It's been used in the wrong way. It's torn down the wrong walls, it's broken through into the wrong areas, it's opened people up to the wrong stuff but that doesn't mean it's bad. It just means it needs to get taken back. When we do a gig, at the end of it we ask, 'Did we worship? Did we pray? And was it rock'n'roll?' And if any of those elements are missing then it's not really what we're supposed to be doing. So we're a rock'n'roll band but our heart is to worship God. We do the same thing; you put us in a bar with a bunch who don't know Jesus, or you put us on the stage, we're going to do the same things. Mainly because we can't play any other songs!"