Ooberfuse: Highlighting the child victims of the Philippines' war on drugs 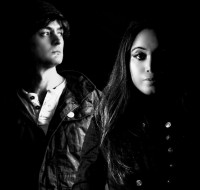 The London-based electro pop group Ooberfuse have become well-known for recording songs a long way from the banal hedonism which often pass for lyrics in the music of clubland. The duo, consisting of Cherrie Anderson and Hal St John, have in the past sung boldly about various social political problems. However, with Ooberfuse's new single and video "On My Knees", to be launched worldwide on 24th March, the group are bringing into the spotlight the stark reality of one of the most awful of tragedies blighting our broken world. Manila-born Cherrie went with a film crew to explore the impact of the Philippines' drug war on poverty stricken children.

Said Cherrie, "I hadn't been back to Manila for over 12 months so I did not know what to believe reading newspaper articles here in London about the war on drugs waged across the Philippines from 1st July 2016. I therefore got on a plane with a film crew and band-mates to join a group of crime journalists assigned to the night shift to see for myself. Speaking to them, hearing their stories, witnessing crime scenes proved beyond doubt the terrifying and ugly truth about what is happening under cover of the night throughout the poorest districts in the Philippines. Yes, it is sadly true. . . over 7,000 people, allegedly part of the drug apparatus in the Philippines, have been gunned down without recourse to legal defence, by trigger happy police and vigilantes while children look on."

Hal, Ooberfuse's instrumentalist and producer, continued, "At the first scene we reached at 2am last Monday morning we found a teenage girl lying in a pool of blood on the floor of her makeshift shelter. When we got out of the van we heard the spine chilling wailing of her sister hysterical with grief. Her six year old brother stood mute and wide-eyed at the side of his disbelieving father. Two masked gunmen on a motorbike unknown to the gathered locals opened fire on her and rode away. Her sister screamed, 'She did not put up a fight yet they shot her.' Journalists have used photos and the written word to make known to the world the silent slaughter taking place under the cover of night in every town in the Philippines. Through music we hope to make their unheard voices more widely heard."

Shot in the slums of Metro Manila, the music video depicts the emotional impact of this brutal state-funded war on the poor, as experienced by a vulnerable and impressionable child. After a police operation on illegal drugs leaves suspected drug users and/or dealers dead, families and communities are left to pick up the pieces and deal with their trauma. The video shows a young girl haunted by happy memories of time spent with her father, days before he was gunned down during one of these police operations. Filled with a sense of loss and turmoil that her young heart cannot articulate, she attempts to recreate her last happy memory with her father the only way she knows how.

This is so important and God bless Ooberfuse for putting those issues out in the open with their also absolutely brilliant music.