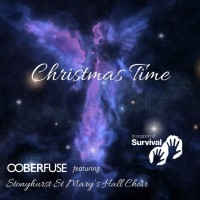 A SCHOOL choir has joined with London's electronic pop duo Ooberfuse to launch a bid for the Christmas Number One. Stonyhurst St Mary's Hall school choir recorded the original track, "Christmas Time", in aid of Survival International, a human rights charity. "Christmas Time" debuted at #3 in the Religious & Gospel chart on UK iTunes when it was released on 6th December. It has also gained the support of TV station Now Xmas. The station is currently airing it alongside popular tracks by Robbie Williams, Emeli Sande and Michael Buble. Survival International supports tribal communities globally. It works in partnership with communities to fight racism, land theft and forced development. Stonyhurst St Mary's is the prep school for Stonyhurst College. The choir hopes "Christmas Time" will aid the Tupi indigenous people who are victims of August's Amazon rainforest fires. Ooberfuse have enjoyed such Cross Rhythms radio hits as "Fall" and "Still Love My Enemies". The band have also recorded a Christmas EP 'A Thrill Of Hope' which was released in November.