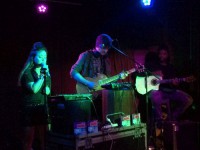 The social-justice charged songs of the London-based duo of Cherrie Anderson and Hal St John, otherwise known as Ooberfuse, have enjoyed several Cross Rhythms radio hits including "Still Love My Enemies", "Fall" and "On The Wall". I was looking forward to seeing their gig in Hoxton to launch their new EP 'Call My Name' on their new label Buzzsaw. I wasn't disappointed. After support act MENOWTHERETHEN, an electronic music duo, Ooberfuse launched into a long set and grabbed the small but enthusiastic and knowledgeable audience. They charged through a playlist of their songs, old and new, and kept our interest throughout. Although their trademark sound is electronic pop, they can also do sensitive acoustic. Despite throbbing club music rhythms the words are never lost. Particularly powerful was "Free", their song about Asia Bibi, and in "27 Million", their anti-trafficking song, they got people up to talk briefly about both. Cherrie Anderson has plenty of presence and her gusty but sensitive voice is the chief attraction. The insistent techno backing did mean that we lost the ethereal quality of her vocals, but the live excitement, with Hal St John adding nifty guitar work and electronic wizardry, made up for that. Many of the songs, like "Secret Tattoo", work on two levels, as both worship and love song. It was fun to hear Alison Moyet's "Only You", neatly demonstrating Ooberfuse's pop appeal. Their best song was unquestionably "Call My Name", which is a really strong anthem and deserves wide exposure.

The opinions expressed in this article are not necessarily those held by Cross Rhythms. Any expressed views were accurate at the time of publishing but may or may not reflect the views of the individuals concerned at a later date.
About Stella Redburn

Stella Redburn is a regular Cross Rhythms reviewer and lives in London.