Being nominated for a Grammy Award for their debut album, PFR have followed through with an even more successful follow up. Jan Willem Vink spoke to the Minnesota pop-rockers. 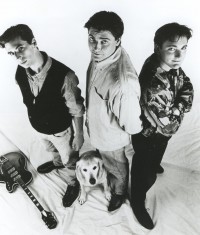 America's contemporary Christian music scene is now so crowded with thousands of newcomers vying for the consumer dollar that any band rising quickly to the top will raise a few eyebrows. PFR made one of the most successful Christian music debuts ever when as Pray For Rain their first release for Brown Bannister's new Vireo label produced several American Christian radio hits. The band, after readjusting their moniker, followed through with the even more successful 'Goldie's Last Day' album and are now up there alongside the Newsboys and Geoff Moore And The Distance as premier exponents of catchy pop-rock.

Their press blurb describes their attitude to music as "very real, very witty and with an 'open book' attitude." The Minnesota band, Joel Hanson (vocals, guitar), Patrick Andrew (bass) and Mark Nash (drums), reluctantly agree with the publicist-speak. So how did the band get together? "Joel and I met at a Christian camp in Northern Minnesota," remembered Mark. "Joel asked me to help with leading worship for camp. A few weeks later, we met Patrick at a youth group Joel was working with. Patrick and I were still in high school. At first, we were mostly leading worship sessions at camp and for youth functions then we began doing some of Joel's songs. One thing led to another and before we knew it, people from all over the state were calling us and asking us to perform as a band. That was five and half years ago."

The band toughed it out gigging wherever and whenever they could. Finally in 1990 came the 'big break'. The group were asked to open at a Minnesota concert for Steve Camp. One of the members of Steve's band was given a Pray For Rain demo which he took back to Nashville and gave to Brown Bannister, the legendary engineer/producer who was instrumental in Amy Grant's elevation to superstardom. Brown was planning the launch of a new label Vireo Records and Pray For Rain were signed to the fledgling company. It was an extraordinary opportunity for the group. Said Patrick, "Because of Brown's reputation we were given a chance." The group seized it with six hands. 'Pray For Rain', produced by Jimmie Lee Sloas and Bobby Blazier, sizzled with radio-friendly hooks like the Beetle-esque "You Lord", the riffing and rocking "Do You Want To Know Love" (with its vaudevillian-style intro ala Terry Taylor); and the haunting, multi-layered "Let Go".

Everything fell into place for the band. Booked as support act to Petra's US 'Wake Up Call' tour Pray For Rain were soon putting their catchy hook-laden music to the national Christian music public. A buzz had been created and the industry recognised the fact. 'Pray For Rain' was nominated for a Grammy Award and won a Dove Award for 'Rock Album Of The Year'. The band took the unexpected industry acclaim in their stride. Mark told CCM magazine, "Pat and I used to live together in a house and when we got [the Dove Award], it went from the microwave to the oven to the fridge." Joel said, "Then we started rehearsing... these guys brought it up and just stuck it on my television, and it has sat there ever since. [It] wasn't that we were mocking that whole thing. We were very honoured to get that, but none of us make a big deal about building a trophy case for any of that stuff."

PFR's experience of the Grammy Awards was equally low key." You should have seen us there," exclaimed Patrick. "We went to this party the night before and our booking agent was with us. It said informal, okay. Our booking agent's dressed in sweat pants, a tye-dye t-shirt and a cardigan and we're dressed in like [denim] shirts and jeans. Everybody else is dressed up in suits and tuxes. We were pretty out of place." Said Joel, "The only people dressed worse than us were the Kentucky Headhunters..." "But they're supposed to," interjected Pat.

"Another cool thing about the Grammys," said Mark, "was that I got a chance to talk to people about what we do that I never would have had a chance to talk to. The bass player from Faith No More was asking me questions like, 'So okay, you're a rock band, but you're Christian too?' That struck me as a very cool thing."

In the middle of all their success there suddenly emerged a fly in the ointment over their name. It seemed another Pray For Rain had got there first. Said Joel, "It was a shock. We felt it was such an unusual name that the likelihood of someone else using the same word structure would be pretty remote." So despite their success Pray For Rain had to change moniker and became PFR. The band's second album rejoiced in the extremely unusual title of 'Goldie's Last Day', a song dedicated to a dearly departed dog. Commented Patrick, "She was a good friend, for a long time. And even though we've had many pets, Goldie was something special." "This was our way of saying goodbye to a family friend, and mixing in a little fun and joy with the sorrow...as only we can!" Joel added. Mark completed the comments: "Goldie was a metaphor for freedom, wit and a keen sense of justice."

The 'Goldie's Last Day' album, sparklingly produced by Jimmie Lee Sloas, offered many musical delights. "This Kind Of Love" penned by former White Heart member Gordon Kennedy and "Spinnin' Round" written by Joel's brother, Jade Hanson, are outstanding. All the other songs are written by Joel or Patrick. Despite all the band's zaney effervescence the album has an upfront Jesus message but one that steers clear of shallow sloganeering. The band don't claim to have all the answers. Commented Patrick, "There was a period in my parents' lives when they had non-stop struggles. My dad battled cancer and my mom had health problems too. It was hard to accept. I found myself praying, 'God, I don't understand any of this, but I know you're in control. I'll hang on to my faith.' Sometimes in life that's all we can do."

'Goldie's Last Day' is currently high in the American CCM charts. I asked the band whether it was hard for a trio to create the scintillating high tech sound of the album in live concerts. Answered Patrick, "We don't try to. We recreate the heart of the songs live and generally they come across better than the record." Joel agreed: "Live is an interesting departure from the record. The songs are more raw and the audience seems to respond well to that."

With their roots in a church youth group what influence did this have on PFR? "We care about youth and we are also young. So the issues we deal with are the same as our audience," responded Patrick. Joel continued, "It's much easier for us to read the searchings of school kids and it gives us things to write about."

Despite the big success of the last two years PFR still have a heart for ministry. Commented Patrick, "I think that when we go on the road now, it is specifically for ministry. Otherwise, it's just not worth the hardship!"

Remarked Mark in conclusion, "Nothing has really changed since our early days, except our platform is bigger. It's really hard for us to plan anything, we're just available for God to use."

For more on PFR visit the PFR artist profile