Recently touring British clubland, as EMI seek to score the elusive crossover hit, Minnesota's PFR still have their feet on the ground, as Mike Rimmer discovered. 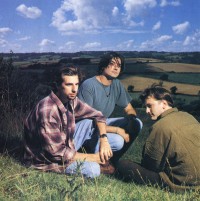 We're just three dumb Americans trying to make make music that we hope you'll like." That's how Joel Hanson, singer and guitarist with PFR introduced the band to an unsuspecting audience at an intimate club gig in Birmingham. Joel, Patrick Andrew on bass and Mark Nash on drums make a sound that is, well, let's not beat about the bush here...LOUD! (My ears were still ringing two days later.)

The band are on a small club tour in Britain to raise interest in their EMI debut single "Wonder Why". Unlike most bands playing clubs promoting their first single, this one has three albums already under its belt. It shows in their confidence as PFR's set is mainly taken from their new album 'Great Lengths' with the odd song from their previous albums thrown in for good measure.

Greeted with a set of songs which are mostly unfamiliar, the audience are suitably British and reticent, preferring to position themselves near the bar and study the trio from a safe distance. After a few songs, Patrick glances at the distant recipients of the band's efforts and grinning holds up a five-pound note to bribe a member of the audience to stand nearer the stage. One guy takes up the offer but finds he can only be five pounds richer if he persuades his friends to move near the front also. The trick, an example of PFR's wacky sense of humour, thankfully works and people move forward giving the gig a more intimate atmosphere. The new songs sound tight and the band look relaxed and self assured.

Three days earlier, London is celebrating winning the war. Heatwave! I sit in a small park listening to the new PFR album on my walkman, wishing I'd worn shorts for my day trip to the sweltering capital. Hyde Park is packed to overflowing, Vera Lynn is singing "White Cliffs Of Dover" and PFR are spending their afternoon in the laundrette. Yes, before you ask, the band wash their own clothes!! Gasp! Life on the road is so glamorous isn't it? The band have found that the English laundrette is the perfect place to chat with the unsaved and enthusiastically recount their conversations to me.

The interview takes place in their hotel and the first thing that strikes me is the banter between band members. This is going to be very entertaining. Knowing that PFR have recorded part of the album in Prince's studio...erm...sorry, should that be Symbol? Or perhaps The Artist Formerly Known As Prince? Or...it's so confusing these days isn't it? Perhaps the men from PFR can help here. If you'd met Prince, what would you have called him? Patrick helpfully suggests "Ma'am".

So what was it like working in the hallowed halls of Prince's studio where so many hits have been conjured out of the ether? Patrick grins, "It's a dump!!" and then tells the truth. "It was seriously incredible. I mean anything we would have wanted, as far as studio toys go, we had at our fingertips." Mark pipes up, "Power Rangers." Joel joins in, "Power Tools!!" Patrick joins his bantering band mates, "Hot Wheels" and then returns to being serious again. "We recorded the drums at Paisley Park and we actually were in Prince's room, it's the Studio A and we were the first ones to use his board besides him in there and so it was very exciting". Any sense of excitement is immediately defused by Mark adding, "Yeah! And we poured syrup all over it!"

Frankly, the men from PFR are all far too charming for me to believe that they could be tempted into acts of mindless studio vandalism. In the end only the drums were recorded at Paisley Park and the rest of the album put together in Nashville. You can hear Prince's cymbal (as opposed to symbol!!) at the end of the title song "Great Lengths". Patrick wrote it, as he explains, "I was taking a look at my life and seeing that everything that I had been doing was really self centred and it's really giving everything to God and saying, 'why am I not doing everything for you?'"

Most bands would walk barefoot through glass if it would persuade a major player like EMI to stand up and take notice. However, PFR have never been a band to chase after the big deal. Joel describes how it happened: "They approached us. Our record company works in conjunction with EMI and people in this country were fairly excited about what was going on with this album and just pieced together some opportunities for us to do some playing and the people of EMI here have been fantastic. They are very enthusiastic and so we're just excited to have a chance to work with them over here."

One accusation levelled at artists attempting to cross over is that the message gets compromised with songs that could be addressed to God or the singer's girlfriend. So did PFR have to tone things down? Patrick responds, "It doesn't really affect us. In approaching us EMI just took what we had and didn't ask us to change anything."

On the surface, this seems very reasonable but EMI have made changes to the release. Their version of the album does not contain the two most overtly titled songs "It's You Jesus" and the magnificent "Grace Of God". They have been replaced with three songs from the previous two albums. So isn't that compromise? Joel is quick to point out, "If one wants to speculate, you might say to have a centre in this arena, maybe we're just trying to soften the blow but no one has come to us and said, 'Look we want you guys to work with us but we want you to write about something else.' That's where I think that they would really run into trouble with us because we're writing about what's going on in our lives and those changes and if you take that off, basically you've taken away what this man is about. If we give up that I think it would be over very soon because the rest of it has been said over and over again and there isn't a whole lot there. We want to write about something with substance."

Those who would like to accuse the band of blanding out in an attempt to get secular pop success are going to be disappointed. The album is in fact more overt lyrically than their previous releases. But are they scared that they still might be perceived as selling out? Joel answers, "No! Because we're not going to. This was a deal where EMI came to us. We never sat down with this record and said, 'OK let's cross over, let's try and hit the mainstream.' We had no intentions of that at all, it just sort of happened. This door has opened and we're just going to see what happens."

And what if mega stardom beckons PFR into the highest stratospheres of the star system? Patrick speaks out honestly, "It's almost scary to think about that because I don't want any of our heads to explode. That's not to say that I'm terribly comfortable with where we are at right now but I think we can contain it. We're locked into good churches at home and I would like it to progress slowly if it does." Mark chips in, "I think if it does happen, it will just follow along with the whole existence of this band which has been God centred and we firmly believe that God put us together. He introduced us to each other, gave us the songs and opened up every door and we've just tried to be faithful to his calling and so if that happens it will be because God makes it happen and I think he will give us the wisdom and the tools to deal with it."

If PFR don't make it to the dizzy heights of the British charts, it won't be for the lack of good songs, nor it has to be said good looks. However, eat your heart out girls, both Joel and Patrick are married. This leaves Mark as the band's eligible bachelor. Joel makes the observation that at recent concerts, "All the attractive young ladies kind of made their way to the back of the platform to see young Mark."

Back on stage in the Birmingham club, it's Mark's drumming that drives the band energetically along through their set of rocking pop songs. Being a club setting the band don't say much between songs. There's some friendly banter and fun. Joel introduces an older song "Mercy Man" by saying, "This song is about a friend of ours, he's called Jesus". Trying to win over an unchurched audience is a challenge and I wondered whether that made the band do different things on stage. Quick as a flash Mark lets rip, "Different things? Well yeah! We take out the cat juggling and the balloon animal tricks and free espresso for everyone". It's Joel who attempts to give me the sensible reply, "I think in a club situation, it's a little more intimate. People are there for the music so we will hammer out probably 20 songs, a real full evening of music and hopefully they'll get a bit of our personalities and a bit of what we're about and who we are through the evening." Then it's back to Mark to reduce things to laughter, "A lot of people can't take their eyes off Joel's hair, including myself...because it's so long. It's been there!!"

For more on PFR visit the PFR artist profile