P.O.D.: Looking at a band which has soared into orbit 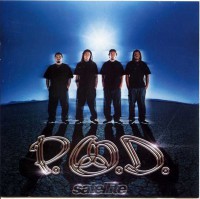 When Cross Rhythms last chronicled the rise of P.O.D. (CR61) they were already THE Christian rock phenomenon of the last decade - rising from the obscurity of local Southtown heroes (Southtown is a suburb of San Diego) to become members of rock star elite touring the stadia of the world and selling vast quantities of albums. Now P.O.D. are even bigger. Their new Atlantic album 'Satellite' sold a staggering one million copies in its first four weeks of release. Now with UK concerts set for January the band are set to shatter British audiences with their ear-blasting rapcore dynamics. Despite their acclaim in the mainstream, the band stay defiantly blatant witnesses for Christ. As lead singer Sonny Sandoval told Revolver magazine, "We play concerts full of [other bands'] acts telling kids to put their middle finger up in the air, sleep with women and do all the drugs they can... When you get up and talk about love, people say, 'What do you mean? Rock and roll is about anarchy.' They say there's no room for God in rock. So you look at it and tell me who's the rebel. Who's the one looked down upon because of what he believes?"

In a recent HM interview Sonny admitted he does feel the temptation to respond if they mock his or his band's beliefs, but realises angry confrontation is counterproductive. At the same time, he isn't going to walk away tail between his legs like some emasculated nit. "I know that because of what I believe in it demands the same kind of respect. So, I have to watch myself, because then the old me starts to come out. The new me is all about love and, obviously, I'm not going to tear somebody apart to get my point across, or put somebody down to get my point across. It's like, hey man, if someone's going to spit in my face, well, I'm not a punching bag. I'm going to stand my ground. It's like, Take your best shot.'"

Sonny continued, "I don't believe that I have to fight this battle of my faith. When I see somebody when we are hanging out, they can be the total opposite of me. But it's like, 'Hey, let's enjoy our dinner, I'm not gonna not talk to you because I haven't sensed you know God, because you don't really have an understanding, you don't have a knowledge about it. Let's just talk about life in general. Let's hang out!' Ya know what I mean?" This brand of laissez faire theology has served P.O.D. well. This is not some sort of sanitized party line, this matter of factness can only be interpreted as genuine. Sonny went on, "I don't introduce myself as the Christian Sonny and if you're not a Christian then get out of my way! We can do whatever; we can hang out. You are gonna know who I am, by my character, that I am trying to do the best that I can, that my life will reflect what I believe in."

Clearly P.O.D. are not charlatan rock 'n' roll minstrels armed with some really boss tunes to lure unsuspecting children into their Church of God Rock. Sonny doesn't even concern himself with labels, "That can't be our focus: 'Oh, we're gonna show people we're this kind of band.' You just pray and know that God will take care of it." Love motivates P.O.D. to keep going and keep playing music. Not only is it their love of making music, music that can tear the roof off the house, that can "rock the party," but also love that can simultaneously rid the mind, body and soul of aggression and refill it with a satisfied peace. It's all about love. This love permeates the P.O.D. philosophy. "I think with this new record, I think you can take it in a subtle way, this album is just kinda talking about love and how all you need is to use that little section of the heart and God will go wild with it," Sonny said, explaining the lyrical direction of the new record.

The most glaring and excellent example of this love is the relationship between P.O.D. and their families. Not only are they devoted to them, but they continue to spend time with them despite their success. Yes, P.O.D. still live in the same tough, gritty Southtown neighbourhood. "This is how I am going to be. This is my life, this is my family, these are my friends, this is where I love to be. I love to hang around with people who love me and I love them," explained Sonny on why they haven't bolted to the swanky mansions in the Hollywood hills.

On remembering the early days of P.O.D. and the relationship with their fans, Wuv said, "They are definitely the ones who inspired P.O.D. from the beginning. They are the ones that took P.O.D. in while on tours, they were the ones who put on shows, they were so faithful to helping us out." Many warriors help coordinate street promotions by handing out stickers and flyers at hard music shows, they call into radio and MTV requesting P.O.D. songs and they simply offer encouragement and support to the band through email and the post. The band literally see their fans as an extension of their own families.

In September the American record industry was rocked with the release of 'Satellite'. "The last album is over two years old, it feels good to have some new songs done," commented Wuv. "I love them, man. They are just awesome. It is a little different, but so has every album we've done. It's probably my favourite album that we have ever done." '80s icons HR (of Bad Brains) and raga/dancehall musician Eeek-A-Mouse both contribute vocals to the record, which was a dream come true for the band.
During a week when the world stood still, trying to comprehend the terrorist attacks on American soil, P.O.D. launched its positive energy-laden statement of hope and thanksgiving on the musical world. Released on that fateful day, September 11, 'Satellite' entered the Billboard Top 200 album chart at number six, selling over 133,000 units in its first week, making it the highest selling Christian music debut ever. Following suit, the video for "Alive", the disc's first single, rose to the number one most requested slot on MTV's Total Request Live (a spot held last year by P.O.D.'s "Rock The Party (Off The Hook)") and the song spent three weeks at number one on Christian rock radio.

More remarkable, beyond the phenomenal commercial success, has been the critical response to the album. "If P.O.D.'s religious devotion inspired them to turn out the most soulful hard rock record so far this year, then maybe more new metalheads should get down with God," began Rolling Stone's four (out of five) star review.

Back on August 20, in more innocent times, P.O.D. appeared in the studio with Carson Daly on TRL to introduce the world premiere of its somewhat controversial "Alive" video, which has scenes of a very realistic car crash. Singer Sonny described the song as "uplifting," saying, "We always want to encourage in our music." The singer went on to say of the video's message, "It's just thanking God every day for the breath he's given you. For us, we're grateful and we're humble to that, so we just keep living day by day." Following the premiere, guitarist Marcos was quick to point out that in the video the guy in the accident makes it. "He lives, he's OK," he said. The message is simply, "Don't take life for granted."

For most Americans, life is something they are not likely to take for granted any time soon. In light of the terrorist tragedies that befell the United States, P.O.D.'s manager Tim Cook commented, "I am amazed and deeply moved by the amount of emails and posts we are seeing about how 'Satellite' is helping people through this. Particularly songs like 'Youth Of The Nation', 'Ghetto' and 'Alive'."

Landis acknowledged the timeliness of the album's message. "In light of recent events, many songs from 'Satellite' have taken on a new meaning. I'm pleased the album is getting into the hands of people who are searching for answers."

For more on P.O.D. visit the P.O.D. artist profile