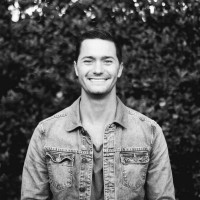 As hundreds of thousands of churchgoers will tell you, "Good, Good Father", co-written by Pat Barrett and Tony Brown, originally recorded by Housefires and made into an international hit which has circled the world's churches by Chris Tomlin, is a modern worship classic. Recently, Chris Tomlin announced the launch of his record label Bowyer & Bow, with his first signing being Pat Barrett. The EP 'Pat Barrett' was released on 8th June, and the full-length album on 20th July. Cross Rhythms' Jonathan Bellamy took the opportunity to speak to Pat about his life and ministry.

Jonathan: To start off with, tell us a bit about your background, what your parents did, that kind of stuff.

Pat: I grew up in Atlanta, Georgia. My Dad is a minister so I grew up as a pastor's kid. My Mum was a systems analyst for Delta so I grew up on airplanes and in church basically. My Mum didn't travel for a living but being part of Delta meant you can standby for free. I remember growing up always being in an airport taking trips to see family and being literally at every church function that the church had because my father was the pastor.

Jonathan: So, growing up, this is a question to find out a little bit about your spiritual journey, as a boy did you prefer planes and being in the airport to being in church? Or the other way round?

Pat: Are you kidding me? Of course I'd rather be on an airplane. I didn't really know anything different. It was my normal. It's funny now that I still spend my time in the same places.

Jonathan: What do you think was the most significant experience in your journey? Obviously, growing up in a Christian home, your father's a minister it is life in a sense but where did it become real for you in your journey with Jesus?

Pat: I remember being a freshman in high school, grade 9. We went to this youth camp and for the first time I heard someone preaching out of the Message translation of the Bible and I couldn't articulate it at the moment but for some reason, having grown up around scripture my whole life - my Sunday school growing up was like we read through the Bible. When I was in middle school I'd read through the Bible already. Which is crazy. It was like the Acts, Pentecost experience when people were hearing the wonders of God in their own language. I went home from that trip and got my copy of The Message and I read it and I wept through it. I don't know why I was so moved by it. It was like I was hearing it in my own language for the first time. I'd always loved music but I remember that being the moment when I said yes to myself. It wasn't some inherited Judeo Christian values anymore from the way I grew up. I made a decision that I was going to spend my life forever living in this freedom that I'd found. I said that with the zeal of a 15 year old but I still find that to be true at 33. I still have that same feeling; this is the feeling I felt then.

Jonathan: It's a particular battle, isn't it, for young people growing up in a Christian home? They've kind of lived with Christian culture or church culture and you can almost think you are a Christian but you've got your own wrestles and battles to come out of for that to become genuine and you genuinely have that relationship with God.

Pat: Exactly. One of my favourite stories is when Jesus meets the woman at the well. It says she goes back to her town and says I've found him; I've found the one. And it says the entire town came to Jesus and then they meet him. And what they say to him is at first we believed because of the woman's testimony but now we've seen for ourselves. The reason anyone has heard about Jesus, unless you've had a divine vision or a dream, is you heard someone else talk about him, about the life that they found, the freedom they found. At the beginning that's ok. You believe because of someone else's testimony but then there comes a time when you decide for yourself. It is a struggle but I do think that it feels like real life. Until you go through something where you have a real need, it's hard to realise what your life has been built on. I found that to be true. You go through some big life change and it kind of reveals am I filled with fear and anxiety or am I rooted in something deeper?

Jonathan: Obviously, you are so well known for the song "Good, Good Father" and that kind of tension there between church culture, the church culture that says God is good all the time, all the time God is good but I get the sense with that song that it comes from a deeper place than reciting a truth; that there's a life experience that's inspired that song. Is that true? Is there something that you've tapped into in terms of your relationship with the Father when you sing that song?

Pat: Yes, it's completely true. Any of the songwriting I do is always connected to a life experience. The line "I've heard a thousand stories of what they think you're like" that's because at the time I was going through such a wrestle in my own walk with God because every weekend I was at a different worship conference or event and there would be an amazing, powerful, articulate, inspiring message but at the base of that message there was always a different take on what someone thought God was like. I think we ask that question a lot: what is God like? At the time I had just become a father myself, my daughter was probably three, and I'm trying to explain to her what God is like. It really did come out of one of those more difficult internal battles. What was I going to land on? Is he distant? Is he angry? Does he like us? Does he just tolerate us or does he actually like us? Does he find pleasure in us? I think those questions, on some level, are part of the basic human experience. What's he like? When we read the words of Jesus he always oriented us towards that 'father' language. It is such a loaded word. It's an experiential word. 'Father' is not just a label. You project onto him what your earthly experience has been like. So, I think that whole wrestle at that time of my life, that song helped to give me language to really connect with God through all of that.

Pat: The basic premise is, the agenda of the night is to gather together in worship and anything can happen. Unrushed, communal worship together. I say communal because depending on what your worship expression looks like, or your experience of church or your background, that can be really different. Some Sunday mornings it looks like one person singing a song and we just kind of spectate. For us the value is if we don't all participate, it's going to fail. Everyone brings their piece to the table. Everyone brings their contribution and when that happens something really beautiful happens. It's not always polished, clean worship. It's rowdy, the songs are longer, there's spontaneity but I feel that that dynamic feels true of life. I think that's one of the reasons why it feels really important to us. Life is not polished. Life doesn't happen in autotune, photoshop, three-minute segments. It really is the in between; the songs that happen after the songs, the moments of lingering where a lot of life takes place. That worship could sound and feel like that is really important to us.

Jonathan: So, do you take people with you as you worship God? Is that what it is? Rather than you're doing something from a stage?

Good father what an amazing song, breaks me every time, I know Father God loves me but to proclaim that, I suppose I don't really feel worthy of His love and I know when I can sing it out joyfully instead of being broken that I will have matured in Christ another bit. Love this song so much that we played it at our wedding, so thank you so very much for stepping out and sharing this awesome song 😍