Paul Wright: Rap, rock, pop, jazz...with a burrito on the side

Singer/songwriter PAUL WRIGHT is redefining what is meant by the phrase "American CCM." Tony Cummings reports. 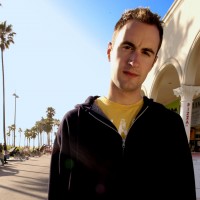 The next time you are confronted with one of those "all Christian music sounds the same" observations, point the uninformed person in the direction of Paul Wright. This soft-spoken Oregon native defies all the critical barbs directed at American CCM. In fact the singer/songwriter produces music which defies pigeon holing reflecting as it does elements of hip-hop, alternative rock, reggae, pop, old school jazz and whatever else happens to please his eclectic ears. Paul's new album 'Sunrise To Sunset' is, like its predecessor, picking up considerable critical acclaim. Said Paul, "These new songs are about my heart's desire. A desire that my walk with God would become more practical every day - from sunrise to sunset, not just on Sundays and Wednesday nights. The cook thing is that with every sunrise and sunset, God gives us all fresh starts. So for me this album is also about new beginnings."

It's safe to say that Paul's entire world went through a kind of new beginning with the success of his debut, 'Fly Away', and the heavy touring that came on the heels of its release. Wright had to learn a whole new way to live - and mostly without his beloved community back home. "Being on the road was frustrating at times," confessed Paul. "In a way I had to learn to live the Christian life on my own. But one of the good things that came out of my time on the road, besides meeting a lot of great people, is that I realised how much I really need God - how we all need him, just to get through our day."

One of the outstanding tracks on 'Sunrise To Sunset' is the confessional "Come Around", a signature blend of Wright's distinctive rapping style and more than a few flashes of rock guitar flavouring the heavily rhythmic track. Arguably the most inventive, complex and poetic lyrical effort among his new batch of songs, the tune's narrator is taking a friend to task for being a distraction from the path toward God - and Wright doesn't sugarcoat how difficult a struggle such a confrontation can be. The lyric goes, "Come around come around/No please don't come around/You always bring me down whenever you come around./Well, it's a new day and I got a whole new way of livin'/Forget about the bad decisions and how I give in/Listen to my heartbeat but don't be beaten like an athlete cheatin' and later is defeated/It's bittersweet thinkin' I can do it on my own kid/I need some friends to help me when I'm struggling and when I'm stumbling, fumblin' and my world is crumblin', being humbled and in need of something."

In the midst of such serious songwriting, there's still room on Paul's album for a glimpse of his tongue-in-cheek humour. "Burrito Boy" details his intense love of Mexican food, so much so that he "fell in love" with the girl who prepared his meal at the Burrito Boy taco shack. "I like to reflect on good times," Wright revealed. "There's so much darkness in music today and I don't want to be a part of that. I like to make people happy with my music and have fun doing it."

Which of course still leaves room for plenty of poignancy in the songwriting. Another possible radio hit on the album, "Heaven", begins the album with brightly coloured acoustic chords, full throated, triumphant harmonies and a lyric full of images of our eternal destination. "I became a Christian when I was 12 and I was excited to know about Heaven," Paul commented, "and this song comes from that place of excitement, of anticipation."

Closing things is "Thank You", a quiet number in appreciation to God for every breath that we're given. "I wrote this after a buddy of mine passed away. It was an eye-opening experience for me. His death came out of nowhere, just really quick. So I wanted to thank God for his grace that I'm even alive, because my friend's death showed me ever more that life is but a shadow."

A huge amount has happened since Paul emerged on the scene with his 'Fly Away' debut. And for Wright, his soul-searching songwriting had led to transformations and changes that continue to impact him. "All of what's happened to me in the last few years has been a blast, a dream come true. But still, I'm continually asking God what my next move should be. I want to know if I'm walking in his will. I want his Spirit to flow through me. That's what I want more than anything else."