One of the brightest and best new rock bands to emerge Stateside are PAX 217 Mike Rimmer checked them out. 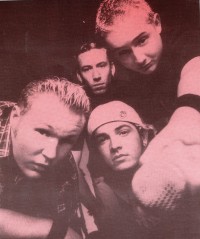 Born in a garage somewhere in Orange County, California and taking their name from Ephesians 2:17, singer Dave Tosti, guitarist Jesse Craig and sibling rhythm section Josh and Aaron "Skwid" Auer, Pax 217 (that's two seventeen) have exploded onto the scene with a debut album that's making waves. I met them in the lobby of the very posh Renaissance Hotel in Nashville. Looking every inch a rock band, they trooped in looking sheepish. They were late and without the wonderfully named Skwid who was still at school and not due to hit town for a couple of days.

Pax 217 was originally formed in the mid '90s by Dave Tosti but, like many teenage bands, went through numerous line up changes and musical styles before settling on the current conglomeration. Jesse commented, "It was a little more ska/funk style to begin with, now it's a little bit harder rock with more reggae influence and hip hop influences. We really do our best to incorporate as many different styles and sounds as we can. The whole vision is to bring different types of heads together under the Lord's name in music. Also these days the lyrics are a lot deeper and a lot more home-based. Every band goes through trials and then goes through learning how to write about them."

Although the band are still very young, they have definitely been through some tough times. Josh and Dave nearly died in a house fire. Dave remembered, "We were woken up about 4am with somebody banging on the door. They'd made a wrong turn by accident up our street and saw that the house was on fire. He banged away until we woke up. I was the first to wake up and got everybody up and we just bolted out of the house. About 30 seconds later when we got to the driveway we looked up and saw the whole roof was on fire Then it just collapsed."

The two bandmates were down to earth in their reflections about the incident. Dave shared, "We've talked about it quite a few times. We don't wanna get all super-spiritual and act like something's more than it is. But, after some of the things that we've been through the last few years, it's created a bigger desire in my heart as far as sharing our testimony and saying that I know that God spared my life."

Jesse explained how the band have chosen to sing about it, "We wrote a song about it called 'No Place Like Home'. It's something that when we do play it, Dave usually gives a small intro to the song inviting people to come and talk to us afterwards. We've had lots of occasions where people have shared with us the same experiences. We've been able to pray with people on many occasions. I've even had parents come up to me after shows. On this last tour I had a Dad come up to me and tell me that him and his wife were going through a divorce at that point and he was just in tears sharing some things. We prayed and this is a 45-year-old man! It really is just a blessing to be there for those people and bring up real issues. It's not to say let's go get angry and mad at our parents and hate the world but who are you gonna give it to? You give it to yourself and be selfish and hold it in or are you gonna give it up to the Lord and let him carry you through those pains and burdens?"

A few days later, in a record company suite, I finally met the baby of the band, Skwid. He explained that his nickname came from another musician who wanted to make fun of him but instead of calling him a squirt, it came out as Skwid and it stuck! He's nearly 17 but looks younger and is still in public school so the band have a temporary drummer during the school year. Skwid smiled, "I'm going to be playing a little bit with them in the summer. I've got another two years in school. Is that frustrating? Yes, very much but it's my choice."

Skwid's testimony is another example of the depth of experience in PAX 217, despite their youth. Josh remembered, "When Squid was born five years after I was, the doctors gave him about seven days to live. They said he wouldn't live and if he did, he would be severely mentally handicapped because of lack of oxygen getting to the brain. We have a song on the album as a tribute to Skwid. I had always asked my mom for a brother and so the whole perspective of the song is just saying that God is a healing God and Skwid is a miracle! He sits behind me every night and plays drums. He's 100%, totally smart and gifted. It's been 16 years since he was born and every night as we sing that song, I thank God for giving me the brother I wanted."

The band have had a busy year touring with Plankeye, Bleach and Skillet to get their music out to a new audience. Their testimony, the sheer energy of their live performance and the power of their debut album, expertly produced by Howard Benson (the man behind the recent megahit by P.O.D.), indicate that they're shaping up to be a band that makes a ministry impact. So what lessons have they learnt on the road with these more experienced bands? They all yelled at once but the gist of it was, "Don't leave your van unlocked so there's open cans of salmon in it when you get back from the show and it smells really bad." They dissolved into laughter. "Thank you Plankeye!"