Peabod: A rapper shooting from the hip with a good dose of fun 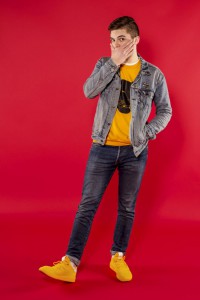 When in 2014 a folk-tinged singer/songwriter from Federal Way, Washington with the distinctly uncool name if Isaac Peabody emerged onto the scene with an EP 'Steps' nobody could have guessed - Isaac included - where the next four years would take him. But his metamorphosis this year as Peabod as a RAPPER is surprising. And what is absolutely staggering is that his debut album 'Tasty Snacks' and his much-watched vids (his first single "Shoot From The Hip" is garnering thousands of views every day) are demonstrating that he is one of the cleverest and funniest hip-hop exponents to emerge for years.

Cross Rhythms spoke to Peabod and began by asking him how the transition took place. "I have been a fan of hip-hop for a long time, even though I've been writing folk music mostly. I think I had finished up 'Indigo' (Isaac Peabody's 2016 EP) and then I was writing songs just for me. I thought that it would be really fun to write a hip-hop project that was purely just for fun, not, like, to meet anyone's expectation or prove that I could do something, but to just have as much fun as I could. So I started with some reflection and that got good feedback so I decided to do a whole mix tape. The more I wrote the more it felt natural to me because I think I had put off writing hip-hop for a while because who would take me seriously, look at me. But then I was like, well maybe being taken seriously isn't the point, maybe having fun and being happy in hip-hop could be a good route and so trying that out felt more natural than I expected and ended up being really fun."

The 'Healthy Snacks' mix tape got a limited release independently in 2017 and such was the quality of the man's flows and production ideas that Peabod got signed to Centricity Music, the label distributed by EMI Christian Music Group. Now a re-recorded 'Healthy Snacks' is impressing all who hear it. The opener, "A PEAceful Introduction", spells out where he's coming from:
"This is new for me, new for everybody
New happy rap music for your party
Starting with a flow in 3/4 if you heard me before, that's great
Or you might ask, 'PEABOD don't you make acoustic folk music?'
Yes that's true and here's the mix tape friend
'But you're a singer songwriter, where's your focus?'
Sorry I wasn't listening, what was the question again?
Oh right, focus for me is a broad term
It might be the wrong word to be the descriptor for the sonic picture I'm painting
Bring light and freedom and colour and childlike wonder
I want to hover wherever that kind of music is playing
These are the sounds of a kid in a candy store
Each song is the cartridge and I am the 64
I live in the moment but I got nostalgia galore
Get ready to feel it the second you open the door
Lyrics like a sword slicing up the track
Got me feeling like Samurai Jack
Where all my 90's kids at?
Grab your Discman and favourite fanny pack
I just can't stop it this is more fun than Bop-It
I have to call it don't give me the mic cuz I'll have to drop it."

Elsewhere on the album there are odes to friendship like a tribute to his roommate Fletcher, "Summer Of Fletcher", while "Hat Hair" (describing the mess a hat makes to your hair) is hilarious. Not everything is light-hearted, of course. The track "Dang!" over a propulsive rhythms colourfully describes how his home was broken into by thieves:
"They took all my hoodies and flannels and tees they all gone
They took my recording gear and homemade cookies from my mom
They took almost everything that they could get they hands on
Worst of all they took my laptop and with it all my songs
Instead of reading I was typing up police reports
Instead of rapping I was trapped in some insurance forms
I could focus on my newly busted car door
But there's too many stars inside my head I can't ignore
No way, I will not throw away
Any of my goals they sounding like bold claims
Feeling that old sway up and up like Cold Play
Just give me a whole day and I'mma make some gold hey
Breathing hip-hop studying the old school
Try'na get to my spot you go'n need a step stool
You can take my laptop you can take my Pro Tools
But you know I won't stop until all I hear from you is
Dang! Dang!"

But even when Peabod's themes are serious, like the young lady to whom he is now engaged, his confessionals have a wry twist. On "Steady" he admits:
"I'm a little bit distracted I go back and forth
Anytime the beat is lacking I tend to get bored
Sometimes my thoughts just get so loud that they can't be ignored
I'll keep my head up in the clouds until my neck gets sore." 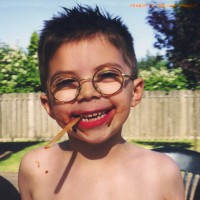 When Centricity released the first Peabod single it came with a photo not of a scowling young man standing in a graffiti-covered street but of Peabod aged five with a lollipop stick in his mouth. Peabod explained the unusual publicity shot, "My dad was in graphics design for a long time and he had put together an album cover that I was using for promotion before I met Centricity. Then we started to work together and they wanted to go in a different direction. My mom had just randomly sent me some old picture and I thought 'oh my goodness this would be perfect' so I sent it off to the label and they loved it and it kind of all just fell into place."

Peabod grew up in a Christian home. He remembered, "I was going to church with my parents, reading Bible stories. I think that it was just in steps of becoming real for me. I guess I've only gone through phases of feeling kind of stagnant with my relationships with my Lord or bitter, but always at my core I've always known this is what I believe and this is what is true. I don't think I ever went through a big rebellious phase, I'm kind of a rule follower, so it isn't your classic rapper story. I think that through growing up and going to college and graduating college, starting life in the real world, I think there has been a bunch of phases of me realising God's faithfulness and the Gospel becoming more real for me."

With his album out and selling, demand for this most unlikely of emcees is growing. He said, "Things are starting to ramp up a little bit. I actually fly out to Wisconsin this week for a festival called Lifefest, I got a slot on Saturday. I got a Christian college I'm flying out to in the fall, I'm scheduling a couple little local shows for myself. The hope that some more one-off shows will pop up and continue through the fall and the winter and in spring I can hop on a tour. My goal is to be able to have a DJ and drummer with me, I've played with both but not at the same time. It's usually me and a DJ and I've done just me and a drummer once. This festival in Wisconsin will be just me but I will be playing ukulele and bass on a couple of songs."

The thought of a ukulele-playing rapper is for me a very appealing one and we Brits can but hope it won't be too long before he hits the UK.