People Of The Earth: A new EP from a church experiencing revival

People Of The Earth

With the modern worship movement showing no sign of slowing down, it now seems that almost every church with a set of reasonably gifted musicians and a growing congregation are releasing albums. However, an album emanating from the East Somerset Baptist Church in Somerset, Kentucky is currently getting a lot of attention for the simple reason that it comes from a fellowship that is in the throes of revival. The six-song EP 'Victory', by People Of The Earth, has been picked up by Christian music giant Capitol CMG and one listen to this powerful project will convince even the most jaded churchgoer that God is doing something special with this particular bunch of worship musicians.

People Of The Earth have as its core members Dustin Fenison (vocals/guitar), Steve Hampton (guitar), Josh Lopez (keys) and Jorge Lopez, Jr. (drums/producer). The band released an album, 'We Are The People Of The Earth', back in 2015, as well as an avalanche of singles more recently. But it's 'Victory', with its eclectic mix of styles taking in everything from Duran Duran-style electronic influences to a healthy dose of banjo-driven Americana, which is currently drawing in more and more listeners. I spoke to Dustin Fenison about how the core People Of The Earth musicians came together.

Dustin: We are all worship pastors in our church and have come from different places around the country. Our drummer is from Phoenix, Arizona; I originally grew up in Florida. But we all found our way to Kentucky, just outside of Nashville. Through our travels and through serving in different ministries and different conferences and leading worship in different places, we came to know each other over the years and about four or five years ago our friendship led us to start playing music together and writing together and travelling together to lift up the name of Jesus.

Tony: Was it originally the intention for it to be a Sunday service only group or right from the beginning did you feel that there was travelling involved?

Dustin: That's a great question. It's been about a 15-year process, originally just serving in our church and from that came opportunities to lead worship at camps or conferences or student weekends and things like that. Oddly enough, we've never solicited for an opportunity to play. We've never picked up the phone and called and said can we come play for you. From day one it's always been the Lord has opened this door and we kind of walk through it. As time went on and travelling became an extra part of what we did apart from serving in our church and other places too, that's where on our travels we met the current configuration of who the band is right now. And we all get along so well and we all serve at our local church in Kentucky.

Tony: I understand your home church is experiencing revival. If that was happening in mine, I think I'd be pretty reluctant to leave and go out on a tour.

Dustin: Well, what has been happening in our church over the last five years is very much a sea of praise. In fact, it's longer than five years. I've been on staff, serving here for 15 years and what we've seen God do is remarkable. It's very difficult sometimes; it's just not common to see a place that's established, a church that's almost a hundred years old with an entrenched tradition, experience the transformation that we've seen. And what's amazing is it's happened through this expression of worship, this kind of worship revival. In it we've seen people's hearts changed as one by one the Holy Spirit brings people to life and now you've got some people here in Kentucky who love Jesus, who are doing his work in our community; who are serving in mission work around the world. There are recovery ministries, people who have been healed from all sorts of things, from addiction, from unforgiving hearts. I could tell you stories of reconciliation, things that you would never see, and actual physical healing as well, the supernatural that comes with it. It's an amazing thing to see God do these things here and be a part of it. And you're right; we don't want to go. As a matter of fact when we travel we try our best to hustle back every time we possibly can.

Tony: Would you call yourselves revivalists? Are you trying to take something of what you're experiencing out to wherever you're playing? 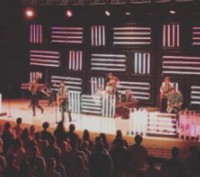 Dustin: That is exactly the mission and the goal.

Tony: How did the tie-up with Capitol CMG come about?

Dustin: We're not terribly far from Nashville and we've been doing this long enough that we have a lot of networks and a lot of friends that we've met along the way. There have been a lot of people in the industry who have been aware of what we're doing from the outside, because we've never been super aggressive. It has never been our mission or goal to have songs on the radio, that sort of thing. But our friends, as they've taken notice, have said where can we find partners to help more people hear these songs. With digital technology and how music is distributed these days, I struck up a friendship with some people at Capitol; a gentleman was there and he loved what we were doing and believed in us and loved the story. Again, that's how it goes; everybody who wants to be a partner usually just gets really excited about what God's doing with our ministry and they want to be a part of it and man, we've been blessed. Even a giant company like Capitol, we've been so blessed, that that team is a bunch of people that love Jesus and want to be a part of what we're doing. We've been very blessed that they've trusted us to partner with us in digital distribution.

Tony: One of the things that impresses me about your particular band is that you don't sound quite like anybody else.

Dustin: We came into the band with our different personal musical backgrounds. All of us in our band we love that '80s kind of sound from Duran Duran. Toto was one of the greatest musical bands, in our opinion, that has ever picked up a guitar or played. They've played on all Michael Jackson's songs. And that inspires us. So we love playing our instruments and being a band. And a lot of times - this is not a knock at all, because there are plenty of loops and samples in our music to, we're not scared of that but everything is so programmed these days. We just enjoy this and we think this is the heart of our church too and the sound of our church and the reason that we live in and we think it expresses it pretty well. For instance "Jesus Saves" on the EP was a hymn that we reworked into 4/4 and has more of a band feel as well, that has that big tom thing that you would hear on a Toto album. And maybe some banjos and fiddles on there too - some Kentucky stuff.

Tony: The mix of sounds is fascinating to me. Is there a particular song on 'Victory' which you feel is the spearhead song for the project?

Dustin: I would say "You're The Fire" and "Jesus Saves" would be kind of the thrust of what we're doing, melding those two things. Like you said, there are our Kentucky roots with our love for that '80s band-driven pop thing and the theme of victory is on the way. All of the songs echo this future thinking that our best days are ahead of us and when Jesus comes back and sets the world to rights there will be a party like none other, a rejoicing like none other, worship like none other and we're just trying to echo that now through our songs. It's a little bit more upbeat than most worship albums and that's kind of intentional too, to echo that sense of hope. If people can experience and taste what is to come, it makes this world we live in so much more - we can express and experience and go through a lot more of the highs and the lows are not nearly as shaking because of what we know is to come, what we know is certain with our hope in Christ.

Tony: And then we start to see supernatural things happen. I know in my church leaders have been seeking revival for a long time and we're seeing one or two little green shoots.

Dustin: Yes. And that is our prayer for this album as it reaches sinners across the globe, that people would be encouraged that this is not something like 'Oh, I'm missing out on that'. This is something that is available to all - how many times does Paul say we are in Christ? This power that raised Christ from the dead is with all of us. A lot of times we overcomplicate this, right? So, with our album, we hope that as we echo and bring glory to God, and as his beauty hopefully through all of this shines a little brighter, that it changes us and changes our hearts and opens us up to more of what he has for us.