Pete Caulfield: The Journey of a lifetime for the Liverpool-based singer / songwriter 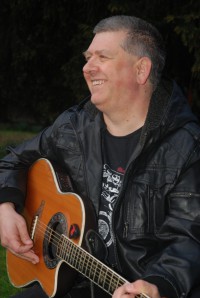 It's a hackneyed-theme, to claim that 'life is a journey'. Perhaps that's because it is. Certainly, in the Judeo-Christian tradition, it seems implicit. Pilgrimage, the nomadic tribes of Israel, exodus, exile all spring to mind. It's funny how the life of faith often uses the allegory of journey, the journey of the heart, the exploration of the interior. Along the way, concepts like 'home' and 'destiny' all enter the experience of an ongoing odyssey. No, it's not an evolution.

For the Liverpool-based singer, songwriter and worship leader Peter Caulfield, 'The Journey', is more than just his first album since 'Rescued' in 2012; more than just the theme of the songs. In some respects, his whole life is poured into, distilled into this collection - a culmination of everything that's happened to, and with, him thus far.

Where do we begin? After a 14-year wait for the previous album, 'Rescued' was greeted with some lukewarm reviews. This disappointment soon paled in comparison with what happened when Pete and his wife Tracey saw their daughter admitted into hospital with a serious illness. It wasn't a Liverpool hospital either, and for Pete and Tracey the many visits to see her would therefore necessitate lots of long, tiring return journeys. At the same time, Pete's job as a schoolteacher in Liverpool and the planning, preparation and marking involved with that role no doubt added to increasing feelings of life closing-in, of going down a dark tunnel with no light, or end, in sight. Pete's life hadn't always seemed so dark. He had grown up in a loving home but one with little or no church upbringing. In his teens, he began attending Long Lane Church in the built-up, bustling Garston, in south Liverpool - not far from Paul McCartney's childhood home in the nearby district of Allerton.

Paul spoke about his early life. "I've stuck with things, and God's become bigger and bigger in my life. I met Tracey, my wife, when we were both part of the church and we grew together in 'Christian' things. We were also in the same secondary school. I was in Year 13 (Upper 6th) and she was Year 11, as they call it today. She didn't like me, at first, so I had to do a bit of praying! But she joined the school Christian Union and so, finally, we got to know each other a lot and so I think that God brought us together. Although it's not been easy, we'll soon celebrate our 33rd wedding anniversary. God's been good to us. He's supported us through lots of things."

Whilst having three children (Joel, Asher, Becky), Pete also became an accomplished singer, songwriter and worship leader. The family moved on from the Lane to the lively Frontline Church and later, South Liverpool Vineyard. Releasing albums and playing festivals such as Cross Rhythms and Liverpool's own Crossfire saw the Caulfield profile rise, and tours supporting the likes of Norman Barrett and the gospel-legend Jessy Dixon culminated in Pete playing at Merseypraise, before 1,800 at the Anglican Cathedral in his home city. But then life began to take a different turn.

Explained Pete, "In 2013, when my daughter became ill, everything turned upside down. It was a tough time; with illness in the family it's worrying for everyone. You realise that you don't know what's around the corner - none of us do, in life - we only know the God of the future. When my daughter first became ill, my guitar was put away. I didn't have the desire to play; I didn't want to. I didn't get to church much during that period. I was at South Liverpool Vineyard then, and my daughter was in hospital and so I was going to visit her a lot and with travel, it meant I couldn't really get to church. I am so pleased with Becky and who she has become through all this. She fought so hard. I saw how all those around us supported us, were such a blessing to us, then. It was partly all that which brought me back to Long Lane."

Pete continued, "I can remember the occasion. Tracey said to me, 'Why don't you go along to an evening service, there?' I was in a dark place. I was hanging onto God by my fingertips. I was hanging onto my faith for dear life. In fact, I was being held in the palm of God's hand. Actually, that's what was happening but I couldn't see that. I went to what turned out to be an evening communion service at the Lane, and I'll never, ever forget it. An old friend, Steve, put his arm around me at the service and said, 'It's time, isn't it Pete?' I just fell apart. He probably doesn't remember it, but I do."

Caulfield received the bread and wine with the words of the pastor, Nick Johnson, ringing in his ears: "The night that he was betrayed, Jesus took the bread and broke it, saying, 'This is my body, broken for you. . .' - knowing that things were changing again, for the better, in life. The experience was to inform the song 'Here I Come Again' on the new album, with the first voice heard being Nick's, reading those same words. Life was turning full-circle.

Said Pete, "Later, Tracey said that I ought to go along to a morning service. I did. Nick was preaching and you could've emptied that church - it was like the sermon was just for me. This was where I knew God wanted us to be. It didn't seem like my old church; there were people who I knew, but it was like the old and the new! Incredible! I'd always said that I didn't want to go back to my old church, but now it was a new church."

The return to Long Lane coincided with the return of Pete's music making. Pete began writing once more, with a future album in mind. But this wordsmith wasn't going to rush anything; even revisiting some old ideas from the 1990s. He wanted to reflect on his journey so far.

'The Journey' is a culmination of the songsmith's thoughts and feelings, not just of those two years but perhaps of a lifetime, with the focus on what is most important in life; what we're all here for. Reminiscent of Hebrews 11, the whole collection - even 'The Journey''s sleevenotes - have echoes of the New Testament letter. But it's not just the lyrics of the songs which allude to a lifetime of a journey travelling with God. The styles and musical approaches suggest some of Pete's influences down the years, including ELO, Status Quo and T. Rex. "O Lord Our God" is a joy and sounds like the sort of song Marc Bolan might have written if he had been a Christian worship leader.

Commented Pete, "I suppose that if you write music, all the influences in your life can come out, past and present, even when you don't realise it at the time." The ensemble of fellow musicians and singers on 'The Journey' reflect some of the great talent that Pete has been blessed to work with - as well as rising stars like vocalist Dee Newby who have crossed his path in more recent times. Pete Hawley of Liverpool's esteemed Love & Joy Gospel Choir brings his weighty abilities on keyboards, guitars and harmonies; Derek Hinton (bass) and Graham Hyde (vocals) make notable contributions; the voices of Becky and Tracey Caulfield also feature on 'The Journey'. In "Crown Of Thorns", arguably the standout track, Ian Gilchrist's soaring sax part is a highlight of the album and not unlike the saxophone on UB40's 'One In Ten'. Indeed, the song strips everything away and powerfully reminds us that the ultimate meaning, the ultimate reality in Caulfield's life and, hopefully, ours too is the atoning sacrifice of the historical Christ.

'The Journey' closes with a song some listeners will be familiar with. Remarked Pete, "I have included a special song to me that was written by my good friend and inspirational worship leader and songwriter, Dave Bilbrough. 'Secret Places' was an anchor song that I held on to during a very challenging part of my life and it still means so much to me now."

Concluding our chat together, Pete spoke about the trials and tribulations that all of us have to face. "We have had challenges along the way. I've come to realise that everybody has challenges of different kinds. It can be one thing or another - everyone has challenges in life. My dad was a real blessing to us. We've had some significant periods in recent years and God has always been faithful to us. But it's not just about God's faithfulness - it's about God's people, his body, the Church getting around you and ministering to you at those times. It shows the importance of being 'in fellowship' and the importance of having teachable spirits at these vital times in life; rather than being proud and thinking we know-it-all. Always be open to what you can learn from others at such times. You have to be honest with yourself and others."

Great article, I saw Pete at a local church in 1994.
His music had a profound affect at a sad time in my life.
It was at the time of his Release your People Album.
I was then and still am in a Christian music band and have written a few songs over the last few years. It would be great to have a chat with yourself or Pete.
My number is 01942 728838 God bless, Dave Hart