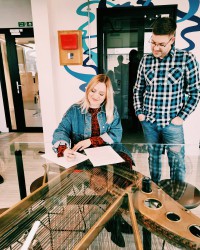 There can be few Cross Rhythms listeners or readers who haven't heard of Philippa Hanna. In her 17 year music career, the Yorkshire-born singer has risen to become the most popular female Christian artist in Britain and her numerous achievements include successful tours with such acts as Lionel Richie, Marti Pellow and Lulu; best-selling albums, with her last two, 'Speed Of Light' and 'Come Back Fighting', taking the Official Christian & Gospel Charts number one spot, with 'Come Back Fighting' peaking at number 10 on the Official Country Chart; and appearances in major Christian events such as Big Church Day Out and Spring Harvest. Now, new vistas are opening for this most talented singer and songwriter.

Philippa made the announcement to her fans, "I'm thrilled to announce that after 13 years of being independent, I've finally found the perfect label partner!" In the early days of January this year, the singer/songwriter signed with Integrity Music, the international company owned by David C Cook with offices in Colorado Springs, Colorado and Brighton and Eastbourne, East Sussex, and whose roster includes many of the major figures in today's modern worship music such as Matt Redman, Darlene Zschech, ICF Worship, Lou Fellingham, Martin Smith, Paul Baloche, Worship Central and many more.

Looking back over her roller coaster career Philippa said, "I released my first album in 2007 (13 years ago?!). And since then, we have been on a slow, steady independent music journey. There were several times when we almost partnered with labels, (we nearly moved to America) but the timing just wasn't right. God knew we were meant to be here in the UK and we surrendered our plans. YOU have been there through all of it."

In 2013, Philippa released the crowd-funded 'Through The Woods' and, in later years, a further two records. Said Philippa to her legions of supporters, "You've made it possible for me to tell people they're amazing, to 'Keep On Driving' and 'Come Back Fighting'. Now we've turned the page. I'm so thrilled to have signed a record deal with Integrity Music. These guys have come alongside me, my heart and my songs. They believe in where this is going and I'm beyond excited!"

Said Steve Harding, A&R manager at Integrity Europe, "We at Integrity are delighted to be partnering with Philippa - a gifted writer, worship leader and story teller. Philippa's songs will call to people, both inside and outside the Church, and draw the focus again to Jesus at the centre of our beautiful Gospel."

Talking about her debut Integrity release Philippa said, "I like to think my music is for everyone, and I've had a vision to make a worship album that will connect with a broad range of people for years now. I've enjoyed being an independent artist, but in the sphere of praise and worship there is no one I'd rather work with than Integrity."

Philippa and drummer/tour manager husband Joel have split their time between the UK and Nashville for some years. With label offices on both sides of the pond, Integrity Music came as a perfect partnership opportunity. She continued, "I wrote most of my last two albums in Nashville and had written with several Integrity artists there. . . when the conversation opened up about signing with them here in the UK, it made so much sense! I will be so proud to call Integrity my home and I am beyond excited about these new songs."

Although the track listing is still to be announced, songs on the album will include "Everything Is Possible", a highly requested song after its live debut on BBC Songs Of Praise last year, and "Now To Jesus", a collaboration that tipped over four million views on Facebook.

Said Philippa, "The past two years have been ultra-challenging for many reasons. My family and I have faced many private challenges and heartaches. All of it has been poured into this album, which is well on the way. Stay tuned through the next season. I just have a feeling God is going to do something really surprising and beautiful. . ."