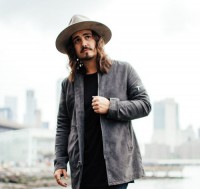 THE CALIFORNIA-born singer/songwriter Jordan Feliz, whose first three albums have all hit the US Christian music charts, will release a new album on 18th December. 'Say It' is released by Centricity Music. 'Say It' was produced by Feliz with Jordan Mohilowski and Feliz's long-time collaborator Colin Wedgeworth. The first single from the project, "Glorify", which features a full gospel choir, is already in the US Christian charts. Two separate remix versions of the song by Platinum-selling artists Lecrae and TobyMac have also been released.

Talking about the 'Say It' album Jordan said, "I've worked harder for this record than I've worked for almost anything in my life. With these songs I want to encourage people to talk more about the beauty and the miracles that God does in our lives when we invite him into our struggles. . . This record is all about what God has done in my life."