Phillip LaRue: A songsmith exploring how through brokenness we can find hope

Tony Cummings chronicles the seasons of PHILLIP LARUE, first as half of the LaRue duo, then a songwriter/producer and today a "new" artist

Debut albums seldom have had much craft, musicianship and precious-as-gold experience as 'Let The Road Pave Itself' by Phillip LaRue. For though it is the singer/songwriter's first solo venture, it is the culmination of 15 years of musical experience for Nashville-based Phillip. Once half of CCM hitmakers LaRue and then a sought-after songwriter and producer, Phillip LaRue was very comfortable away from the performer's spotlight. He told Christianity Today, "I was actually completely content in the background. But I had these songs sitting on my hard drive and when the doors started to open, it just felt right."

Responsible for doors opening was Seattle-based Christian label BEC Recordings, the company which (with their other imprints Tooth & Nail and Solid State) has become the biggest entity in Christian music not based in Nashville. Having heard Phillips' demos, BEC offered the songsmith an artist contract. Remembered Phillip, "I was sitting at Fido's - one of my favourite hangs in Nashville - talking with a good friend of mine, Jeff Balding. I began to tell him my great debate - whether I should sign a record deal or not, and all the details that went with that confusion. He just sat back and listened and then said, 'Phillip, you just got to let the road pave itself.' After that, I began to not overthink things as much and paid more attention to what God was building around me."

Having signed with BEC, Phillip surprised industry observers first by plumping not to produce himself (LaRue has produced such hit CCM acts as Tenth Avenue North) but also to record it using the minimal of technological aids. A press release described the outcome: "An organic set of songs for the digital age produced by Paul Moak, 'Let The Road Pave Itself' was tracked live in the studio to an old fashioned two-inch tape reel, warmly capturing the sound of Phillip and his friends playing real time rock that's concerned with life's deepest matters of love and faith. Recorded in this manner, Phillip kept many of the first takes without fixing, to keep the album as natural as possible."

So why did Phillip go the live/analogue route? He explained, "The records I grew up with and still listen to today all have this incredible vulnerability to them. A lot of records now don't have that musical sensibility to them due to what can be changed digitally. For me, it was important to come across as organically as possible, due to the nature of the songs. It was important that we caught and captured the imperfections of recording, which I think we did, and ultimately I hope folks hear my heart through the noise." 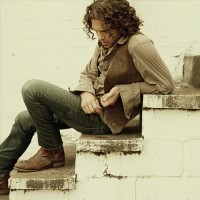 Phillip began his musical journey in the mid-'90s in Phoenix, Arizona when he and his sister Natalie bean working on songs together. LaRue were formed when Phillip became ill with mono-nucleosis in his freshman year at high school and had a long period of recovery at home. His kid sister, then only 15, has a deep, expressive voice not dissimilar to LeAnn Rimes and with Phillip adding harmonies and guitar the sibling duo sounded good. For three years LaRue played concerts around the Arizona area until in 1998 the duo were offered a contract with Christian music giant Reunion Records. The entire LaRue family saw the opportunity and relocated to Nashville. The group's debut album 'LaRue' of appealing acoustic pop clicked instantly with US Christian radio and a stream of CCM hits, like "Reason" in 2000, "Wake Up" in 2001 and "Fly" in 2002 were seldom off US radio playlists. Touring across Americana and with further albums 'Transparent' (2000) and 'Reaching' (2002) the duo remained in the CCM spotlight before suddenly disbanding. Phillip told fellow singer/songwriter Brandon Heath what happened. "Basically, what happened is love took over. I fell in love with my wife; and Natalie fell in love with her husband. When we got married, we knew we didn't want to be on the road. We just wanted to focus on our relationships and be home. After six years of touring and being consumed, it was just time to call that season 'done.' It ended peaceably, and it was great."

Natalie settled for a new role of wife and mother. But Phillip continued in the Christian music business, though now in a background capacity. "I was blessed with a publishing deal right after LaRue. I was still doing music, just not in the spotlight. I actually really enjoyed being behind the scenes a lot. And so for me, it was a refreshing season of being behind the scenes and helping other people get closer to where they think God is leading them. It's been awesome."

After writing for such acts as Brandon Heath, Tenth Avenue North and Krystal Meyers, Phillip finally finds himself in the artist spotlight. When asked whether he felt there was a thematic thread running through 'Let The Road Pave Itself' he responded simply, "Through brokenness we can find hope." Phillip then went on to talk about his younger sister Brianna who has cerebral palsy and now has an inoperable brain tumour. Said Phillip, "She is the family's super glue. I have learned more from her then any other person in my life. She has been in more surgeries than I can count, and has knocked on death's door more than I would like to recall. Yet her passion for life is still innocent and vibrant, thus why she confuses the strong and prideful. If she can be so confident in who God has made her to be, then what am I so worried about? She is my family's true joy, and we have become one because of her."

I've been a fan of Larue since I first heard of them. I have all three CD's.

His new solo act is strong and thought provoking.
What's Natalie up to? Also, from their Reaching CD, i'm having trouble finding the instrumental and or accompany Sheet music for Angels and Peace. Can you help?