Plankton Records: An extraordinary tale of 40 years of Christian music

Tony Cummings spoke to Keith Dixon to get the history of a tiny record label, PLANKTON RECORDS

Tony: To save people getting confused, you're packing the two albums together in a box set.

Tony: What's the most recent recording on this new album?

Keith: On the second 20 years album, the newest recording is by Simon, the founder of Plankton Records. It was very much on my insistence that Simon's track be the last track on the album, because he was the first track on the first album. I'm now 57; Simon's 62, so we're thinking the third 20 years is a bit in the balance! Someone did suggest the get-out clause of the 50th anniversary, but I said, 'Let's get the 40th out of the way first.' But I was really insistent, I felt strongly that I really wanted Simon to have the final song on the album. And this, ironically, is his first ever solo release.

Tony: So obviously his first single. 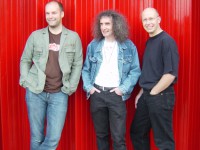 Keith: Sea Stone did a single. Fresh Claim, his third band who are still around, they've done a couple of singles in the past, but this is his first ever solo release.

Tony: Tell me about his song, "The Haven".

Keith: It's a wonderful song. Simon actually wrote it when he went to see his mum, who's in a nursing home in Wales. She's 91 now, I believe, and suffering from dementia. He went to see her and sat with her, tried to wake her up, but she was asleep and wouldn't wake up. So he picked up his guitar and wrote this song. Lyrically, it's fantastic. The first verse deals with his mum. The second verse - a friend of his called Howard Reid died last year. Howard was a friend of his, goes way back. He featured on the single cover with Simon for "Sea Stone", which I think was released in '82, '83. He was a friend of Simon's from his youth group in East London. The third verse is basically about us and God, our connection to God. The reason the song is called "The Haven" is, the nursing home where Simon's mum is has got a Welsh name - and I haven't got it in front of me so I can't pronounce it - but it means 'the Haven'. The whole theme behind the song is having the haven of security and being able to be friends, recognise each other, be with each other. The song was very much written about his mum. He belongs to her, he wants her to remember that and not lose sight of who he is with her dementia and all that kind of stuff. So it's a wonderful song. I didn't know - I just said to Simon, 'Can we record a song?' He said, 'I've written a song I think would be ideal for the album.' I think it's a cracking song.

Tony: Did you consider putting a song for each year on the compilation?

Keith: No, that's impossible. In fact, on the second 20 years we've done a bit of a cheat. By 1998, which was the 20 year point, things were starting to change for Simon and me. Simon is from an Anglican background, and at the point the rules on people becoming clergy had changed and he became eligible for training. Simon had done a degree in theology and he very much wanted to be ordained. He went off to start doing vicar-training; I got a job working for a children's audio company. Up until '98 we'd been working for a charity that was tied in with the record label so we could devote all our time to the charity and the record label; from that point onwards we couldn't: it was like secondary, in the background. Actually, after the year 2000, for six years we didn't release anything. The label didn't fold, it's just we didn't release anything. We're a very small label: we haven't released something every year since then either. There have been some years we've released two or three things, so it's very much as the flow goes with people. On this second compilation we've included four songs that weren't on the first 20 years [compilation] but we really wanted them to feature on a 40-year compilation. So the first four songs on there are older - from the first 20 years - then the fifth song, which I believe is a Ben Okafor song called "Palace", was released in 2000. That's the first of the second 20 years tracks. There's 16 tracks from the second 20 years - just to make it more confusing for people.

Tony: You've got a good range of artists on there. The Mohabir Sisters mean something to me. I co-produced the first Christian dance music from the UK - a thrown-together studio invention we called House Of God - and one of Mohabir sisters is singing on a track. She was briefly my secretary.

Keith: Probably Christine, I would think. I was emailing with her yesterday, actually. That came about because the guy who was managing her at the time, a guy called Rob Taylor - another friend of mine: he'd been managing Ben Okafor - he came into contact with the sisters. The sisters at that point had recorded an album, and it was not long after their dad had passed away - Philip, who was a very well respected evangelist. Rob took me to see the sisters in West London somewhere. Vocally they were fantastic, but the thing that really did it for me was they were playing with a live band, and that time a lot of what I would call black orientated music - it's a big umbrella - was using backing track or synths, programming, when it was bad. It was horrible, very basic technology. They had a live band with them, and Rob said, 'The band are playing on the album.' I said, 'That's fantastic.' Then when I heard the album - the album includes some poetry they wrote for their dad - I said, 'This is brilliant.' So we decided to put the album out, to support them.