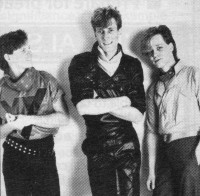 1983 was a pivotal year for me in terms of my journey of musical discovery. Having spent years as a soul music journalist, I was now looking and listening beyond that particular musical field. After my conversion in 1980, I had entered Christian media and as assistant editor of Buzz magazine I was given the task of expanding its Christian music coverage. It was an exciting time for what the Americans were calling "contemporary Christian music" and I was on hand to pass comment on seminal albums like Amy Grant's 'Age To Age' and Keith Green's 'Songs For The Shepherd'. But I was becoming increasingly disappointed that despite CCM's claim at being "contemporary" there was nothing in the Christian bookshop record racks which was anything like some of the music in the UK charts. By 1983 synth pop was everywhere on the airwaves and groups like Human League and Soft Cell were hitting big. But clearly not in Nashville. And although the UK Church was producing some synth-driven rock like the wonderful After The Fire it was still a long, long way from the new wave sounds of 'Non-Stop Ecstatic Dancing' or "Mirror" and the other synth/new wave hits. And then, out of the blue Britain's Christian record label Kingsway Music, who had grown out of Musical Gospel Outreach (MGO) to become the first successful purveyors of modern worship thanks to folky-turned-worship-songsmith Graham Kendrick, released the album 'Decent Beat' by Quickflight.

Quickflight were a Canadian band and for me at least their album was a jaw-dropper. 'Decent Beat' neatly caught the sounds and vibe of the UK's synth pop. In the August 1984 Buzz magazine I was given space to run three short articles - on Bruce Cockburn (still going strong today of course), the Clark Sisters (ditto) and Quickflight. The latter, with their hook-laden songs, could have made it big, in Britain at least, if Kingsway had had the vision to release a single from 'Decent Beat' and get it to the Beeb. But that was pure fantasy on my part and the closing sentence of my article seems in retrospect naÃ¯vely optimistic. "But with a British record debut as excellent as this one, and a potentially explosive Greenbelt stage appearance to come, Quickflight seem well on their way."

The key figure in Quickflight was singer, songwriter, keyboard player, programmer and producer Ric DeGroot. After formal piano studies Ric began working at The Little Mountain Sound Studios in Vancouver where he briefly worked with Strange Advance (the mainstream band who had enjoyed a Gold album with their debut 'Worlds Away'). But by 1979 Ric had joined Quickflight who as well as DeGroot on keys and vocals featured Pete Cordalis (vocals, lead guitar), Mike King (vocals, guitar), Gary HendRics (vocals, drums) and Doug Griesbrecht (vocals, bass). Gigging around Kelona, British Columbia the band created a stir with a tight sound close to the stadium rock bombast of Styx and with ambitious concerts featuring lots of Star Wars era sound and lights. In 1980 they were signed to Canadian Christian label Tunesmith and recorded an album, 'Breakaway'. But although it produced a regional Canadian radio hit with the song "Pink Shirts" (penned by DeGroot) the band began to leak members and by 1982 they were down to a core trio of DeGroot, Dale Dirksen (bass, keyboards) and Greg Johnson (guitar). DeGroot began working in Little Mountain on songs for 'Decent Beat' and the synths and sequencers sound brought a new dimension to DeGroot songs which dealt poetically with themes like finding peace in a chaotic world ("System Breakdown": "You said you would help me stay and keep me in control/So help me rest find comfort to my soul"); inner-city life ("Fade To Glory": "White boys playing on a midnight street/Keeping time with a decent beat") and the complexity of modern life ("Metro Alien": "What's this confusion/Life-sized illusion"). Star Song, one of America's growing CCM labels who were breaking big with bands like Petra, gave 'Decent Beat' a release. For a moment the band found themselves out there on the CCM scene. True Tunes declared the album to be "miles ahead of its time in both writing and production" and Contemporary Christian suggested "Quickflight seems to have defined its calling as articulating the questions of urban youth and pointing in the direction where the answer can be found." 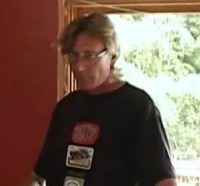 Ric himself said in an interview, "I have a strong desire to weld together the 'new music' sounds with my own personal experiences and relationships with Christ and furthermore accepted as a viable music by Christians and non-Christians alike." Maybe if Quickflight got to play that planned Greenbelt gig it might have happened. The band did play Southern California's Exit Festival, alongside The 77s, Steve Taylor and Undercover. Years later one critic wrote, "They were really good even though the heavily 'punked out' audience did not really seem to have the same appreciation for them that I did." The band broke up in 1984. But intriguingly in subsequent decades they have not been completely forgotten and more and more people have begun to recognise that 'Decent Beat' is a gem of an album. It has been eulogised on the internet's CCM's 500 Best Albums Of All Time; I wrote about Quickflight's "Fade To Glory" track in my Spirit Of Rock And Soul series; UCB broadcaster Mike Rimmer told me recently that a request for all-time-favourite nominations brought forth 'Decent Beat' from one clued-up listener; and the Wikipedia entry recognises Quickflight as Christian synth pop pioneers.

So where is Ric DeGroot today? He was last heard of as a member of the Canadian pop rock band The Lookaways and judging from their "Drunken Man" video on YouTube, Ric can still write a memorable song. But for the small but enthusiastic clique of Christian music devotees it is his pioneering work on 'Decent Beat' which remains his crowning achievement.