Rachael Lampa: Coming back to CCM singing about the embodiment of good

Tony Cummings reports on the return of the Noughties CCM star, RACHAEL LAMPA 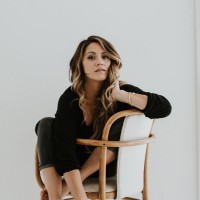 In 2011 the hit-making CCM singer and songwriter Rachael Lampa was featured in an article on the Cross Rhythms website with the subtitle "the award-winning singer returns with 'All We Need'". It proved to be something of a false dawn, for although the album produced three Cross Rhythms radio hits - "My One And Only", "No Escape" and the title track - its striking eclecticism, ranging from pop rock to R&B and even a bit of EDM, was simply too diverse for the heavily formatted demands of US Christian radio.

So the same stations which at first elevated the CCM singer to stardom after, at the tender age of 14, she was signed to Word Records following a bidding war amongst the Christian labels in Nashville, withdrew their support. But now the award-winning singer has shrugged off the disappointments of the past and released two top rate singles; "Side Of My Heart", issued on 9th August, and "He's Good" (6th September).

In 2015, she began working as a backing vocalist for Irish singer/musician Hozier. They toured extensively and internationally, appearing on such big US TV shows as Saturday Night Live and The Tonight Show Starring Jimmy Fallon. They also appeared on the GRAMMYS with Annie Lennox, and performed on the American Music Awards and at the Glastonbury Music Festival.

Married in 2010, Lampa and her husband welcomed their son, Jackson McCarthy, in 2016. The following year she released a cover of the hymn "Turn Your Eyes Upon Jesus". Now, with her "He's Good" single, Rachael is keen to declare the embodiment of good. She said in a recent interview, "When I walked in to write with David Thulin and Rhyan Shirley, I was struck by the pure joy and life in the room. I had been walking with some friends through a long and painful season full of disappointments and seemingly unanswered prayers, and they had just recently come out on the other side with an even bigger blessing than they could've dreamed of! Something they always said, usually through tears, is 'God is good. . .no, God IS good. He doesn't just DO good. He is the actual embodiment of GOOD.'

"This is something that doesn't always feel real or even possible to me, but I really do believe it, in the deepest fibres of my being. He will make all things good whether we see it in our lifetimes or not. So, my hope with my new song, 'He's Good,' is that we can sing this over our victories and over our desperation and all of the messes in between!"