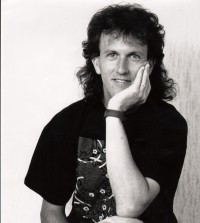 Tony: You've been a figure on the UK Christian music scene for years now. How did you get started?

Ralph: I got interested in synthesizers in the late 70s when they came with patch leads and only played one note at a time. I was in my teens and the idea of twiddling knobs to make music seemed really groovy. I collected about five keyboards initially and after the obligatory phase of having everything plugged up in my bedroom at home, where I could record desperately sad pieces of music for my own amusement on two reel-to-reel tape recorders, I decided to go on the road with it. By this time it was the early '80s, when bands like Depeche Mode and the Human League were on the go, so when I appeared on stage with four synthesizers and two reel to reels, I was actually quite cool. Every time you do a gig you have the potential of getting another one from someone who is in the audience from another town and after only a few months I was playing all over the place. I managed to get on at Greenbelt and other big festival type events and that got me more gigs still. Then I started recording albums and going abroad too. It was hard work but it paid off. It really helped that I was a one-man band and as I went along I saved up for more advanced synths, more PA and lighting, a van, until I was completely self-contained. So I could afford to be cheap and get loads of bookings for gigs, because I brought everything needed for the event. I got into doing assemblies and lunchtime concerts in secondary schools right from the start too, so if I visited a town for a few days I could even provide some of the audience for the gig on the Friday night!

Tony: What's your fondest memory of the Zero Option era?

Ralph: Zero Option was a title which helped suggest that even though I performed on my own, the sound with all the synths and sequencers was more like a band. Many solo Christian music performers tended to be acoustic guitar players, so I couldn't go out as simply "Ralph Ward". It was also a concept, though, of trying to do a very direct and uncompromising Christian message in the middle of this pop concert. It was great feeling like you were helping make Christianity relevant and challenging to young people, especially when they responded to the challenge and went on to do great things for Jesus. I sometimes got told to tone down my preaching at events where it was not considered "appropriate", but I took great joy from being my evangelical self whatever anyone told me and I enjoyed being challenging both to the Church and the young people who made up the audiences. I enjoyed having a laugh too and the more I got into the '90s dance thing the more I grew my hair 'til it looked ridiculous and put on weird leggings and stuff on stage. My fondest memories are of being on stage doing my daftest Prodigy-influenced dance tracks, blinded by a strobe and lost in a cloud of smoke from the smoke machine I always kept on stage immediately behind me. The lighting effects made the keys really hard to find because they seemed to keep jumping around and the whole thing was cool. Also that feeling you get as a preacher where you manage to catch your audience (or rather, the Spirit catches the audience) and they go from dancing round like mad to hanging on every word in complete silence. The "arrival of the Spirit in power" I guess you might call it. Knowing that whatever I have planned for the evening, the Lord has something big of his own to do. Very humbling.

Tony: What got you into children's ministry?

Ralph: It's funny, this vicar, who I had gone on a mission with as Zero Option years ago, emailed me out of the blue. We were going into secondary schools, then he asked me to go into a primary school with him. I thought this sounded deeply uncool, but I went with it in the name of the Gospel and quite enjoyed it. I am really grateful to this guy now for introducing me to a whole new world of Christian work and experience. After that initial experience the involvement in primary school work just grew over the years. It was very much a separate ministry to the youth stuff, with a totally different approach. But kids give so much enthusiasm back and they are so excitable. I'm an excitable sort of character, so I enjoy jumping up and down and shouting like they do. I made a very low budget recording of some kids songs to start with back in 1989, but those songs just went on and on. I'm still playing some of them now. Then two years ago I was doing the all-age worship celebrations at Easter People and they wanted to record a live kids worship album. The prospect got me really fired up to write some new material and then a year later I was still fired up and writing more. The latest stuff is on this new 'Jump And Shout' album through Kingsway. It's weird really, because now I'm using the latest sampling technology to make music, but along with this the new album uses loads of really early analogue samples from the first keyboards I owned. These sounds are now really massive again, ironically, and seeing as I've sold most of my old gear I had to buy the samples back on ROM boards!

Tony: What is the hardest thing about doing kid's work?

Ralph: There's nothing hard about it - you either love kids or you don't. Sometimes if they are really shy it's difficult doing the sort of music I do with kids, which is either heavily influenced by contemporary pop music or sounds like it belongs as a theme tune to a kids TV show. I prefer kids when you're having to scrape them off the ceiling!

Ralph: In my kids meetings we do all sorts of bits and pieces as well as sing and I encourage the kids to write letters and prayers which we then read out through the mike. Some of the prayers have you feeling pretty choked, because they are so poignant and honest. But there was one child who wrote a poem once and it was so full of love and excitement. It expressed his identity so well as a Christian, told others that they should get to know the Lord and then it said some really lovely things about me. I could hardly read it out, I was nearly in tears. It's fantastic to be affirmed and children are so good at it. We get too inhibited to do it properly when we're grow up. I brought it home and pinned it to my wall for about a year, I can't remember it now, but whenever I was down I would look at it and feel much better.

we were just looking in our attic and came across a tape zero option inner space i remember Ralph coming to sandbach in Cheshire and going to see him with some of the youth group i was helping run at that time we all enjoyed it i am now playing the tape and as i used to play it alot i learnt a lot of the words, so am happily singing along. i am going to now let my children listen to it. do you know if it is available on CD