The band ZERO OPTION have only one member, Ralph Ward, but any image of solo musicians as minstrels and troubadours is shattered by Ralph's computerised, hi-tech, hi-energy show. Bryan A McAdie went behind the battery of synthesisers to find out more. 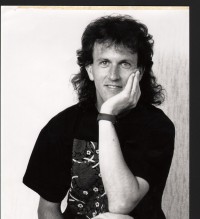 If asked the question where did Britain's 'alternative worship' movement begin, spare a thought for Ralph Ward's Zero Option. Back in the mid 80s before house, let alone rave music were revolutionising the dancing beat, Ralph stood almost alone in pioneering taking a techno groove into the church halls, youth clubs and Christian fests with a strange new clarion call 'have synthesisers will travel'. Back then Ralph's equipment was a bit limited and his sound a bit weedy to be seriously cutting edge, while his direction was more exhortation and evangelism than worship but the Lincoln based Methodist lay preacher still needs to be acknowledged as a techno pioneer without whom much of British Christendom would not have developed beyond strummed acoustics. Now with a brand spanking new album 'Catalyst' the dance beat has got heavier, and with a bit of rave as well as the Erasure and the Pet Shop Boys influences, Ralph shows he knows how to make dance orientated Christian music '93 style.

Ralph bought his first keyboard, an electric piano, soon after leaving school. "This was in the late 70s and they were a bit grim then," he remembers. Then he got his first synthesiser and discovered the fun of playing with electronic sounds. "I was always just as happy pressing buttons, moving sliders about and making new noises as I was actually playing the thing, which is what a lot of writers and band members say. All the synths then were analogue, with patch leads and sliders, and I thought that was great!"

With his initial forays into public performance, he realised his desire to evangelise. "When I first started, I toured pubs and clubs, as you do especially in the North of England. I soon got disenchanted, because there didn't seem to be any point. You went and played your music, then you went home. So I've never done any gig that wasn't Christian, in the sense that it didn't involve the gospel being preached."

His first gig, in a youth club in Scunthorpe in 1983, was supporting another local Christian band. "They rang me up about a week before the gig and said, 'What are you going to call yourself?'. I hadn't even thought of this; I was just a guy with a load of keyboards in his bedroom, so I had to think quick. Zero Option was on the news at the time; it was a nuclear disarmament policy. I just thought it sounded good. Because I'm a one-man keyboards player who actually makes a lot of noise, and the end mix sounds like a band, I thought, 'I'll hang on to this name.' You see, if you say Ralph Ward in the same way as you say Garth Hewitt then people expect you to be one bloke standing there with an acoustic guitar!" The first album, 'Zero Option', was released by Leeds based Ears And Eyes Records in 1985. Success led him to turn professional in 1987, living off the fees he charged for his visits (although his school visits are free). He explains, "I felt very much drawn towards the teenage area. I can get lots of schools work, because I'm only one bloke. I'm cheap and even with all the tackle I've got I can set it up fairly quickly and be flexible." Ralph recorded another album, 'Absolute Zero', in Leeds in 1988 for Ears And Eyes (now called Mega Records). He was spending more and more time in schools and a formula was beginning to evolve. Each visit, set up by a church, led to a concert, usually at the end of the week. The schools work thus became a tool to get the youngsters to turn up for the (evangelistic) gig.

1990 saw a new album, 'Inner Space', with a change of record company, to ICC. Says Ralph, "I was doing an album with Kingsway, called 'Pilgrims' in support of a tour by a theatre company and we used the ICC studios. That first broached the idea of making my third Zero Option album with ICC." Ralph sees this as a positive move. "I'm pleased with the whole setup, because they're all Christians. You don't have to compromise yourself in any way, working with an engineer who doesn't share the vision of what you're trying to do. I've worked with engineers who haven't been Christians and they don't know what you're on about, or what you're trying to do, or how you're trying to say it; so the end result is always going to be rubbish, really.

"I've always seen Christian music as a bit of a gimmick," Ralph continues. "People come in, and they dance, and hopefully enjoy the music. Then you lead up to the crunch which is, 'Look, there's something behind this which is much more significant than a load of music' I know people who claim they only listen to Christian music and only buy Christian CDs. I don't think I've got a single Christian album, or if I have it's tucked away so far that I can't remember when I got it out. I see it much more as an evangelistic tool, as you might use drama, or dance, or any artistic medium in order to present a message."

Ralph's lyrics have softened a little from his earlier material, but still retain an uncompromising edge. "I've never been in the business of providing Christian entertainment, which I see as a non-entity, really. If you want entertainment why can't you listen to what's in the charts? I do play some cover versions, but if you're actually trying to put something over to people that you're going to say in words later on, then your lyrics have got to tie in."

His show is usually centred on the heart of the Bible. "I'm very much into good and evil at the moment, the fact that God has conquered evil by the death of Jesus, a very fundamental gospel truth. It's something that's well current at the moment, the idea of light versus darkness. Also, with the rise of the New Age movement everyone's suddenly got into mysticism in the 90s and I think it's so easy to step from mysticism into Christianity. My horror is that if they are led into a church by this desire to respond to the mystical element within them they then find something that's so out of date culturally that they just walk out again. The only other thing that can satisfy the thing in their brain that says 'look for God' is the symbolism of the New Age movement which is totally empty behind the facade."

He sees more interest about spirituality among today's teenagers. "Back in the 80s that wasn't the case," says Ralph, "but now they really are impressed with it. You ask kids in RE lessons if they've been into the occult, and loads of them have done occult type things like Tarot cards and Ouija boards. They do it, not as a piece of fun but to try to get an effect. Equally, there's a lot of kids who fully understand the New Age movement. In RE classes, because they're trying to be so impartial about religions you end up with the personal opinion of the RE teacher. Loads of RE teachers are into weirdness and New Age stuff, and teaching them all this garbage."

Ralph continues, "These days, to go into schools as a Christian is often to introduce something completely new to them. They've got no idea of what you're on about and when they hear it, they really sit up. They learn all about the practice of religion, what Christians do, but they've got no idea about why they should ever want to do it. That's what I'm trying to do in schools work - to let them in on this big secret that shouldn't be a secret."

The opinions expressed in this article are not necessarily those held by Cross Rhythms. Any expressed views were accurate at the time of publishing but may or may not reflect the views of the individuals concerned at a later date.
About Bryan A McAdie
Bryan A McAdie lives in Plymouth and amongst other helpful tasks compiled an early version of a Cross Rhythms index.

I contacted Ralph a long time ago to enquire about how to get his previous musical works, such as Catalyst and Absolute Zero. He completely ignored me and I guess my request, serious as it was because of how God was speaking to me through his music, was not significant enough to respond to.

i saw Zero option in 1992 in Tisbury and it was the most amazing gi id ever been to or been to since .