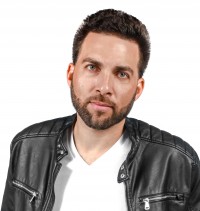 Florida-based rapper Rawsrvnt is well known to Cross Rhythms radio listeners. Since hispioneering hip-hop worship song "Breathe" in 2006 he has had a string of playlisted tracks including "Tears 4 Peers" (from 2007's 'Makin' Moves' album), "No Ordinary Love (Electrocoustic Mix)" (from 2010's 'No Ordinary Love') and "Go Hard" (from 2015's 'Game Changer'). Rawsrvnt's latest single is the US national anthem "Star Spangled Banner". He spoke about it on its release in April. "I know that when some people hear the words 'hip-hop' and 'Star Spangled Banner' in the same sentence their eyebrows immediately get raised. But this is the language of today so I felt it was only right to put this spin on our nation's most treasured tune that would showcase not only my love for hip-hop, but for our country as a whole."

Rawsrvnt (aka Eduardo Ignacio Puyol) comes from a family of immigrants who fled Castro's Cuba to find sanctuary in the Land Of The Free. In view of this and the fact that in 2010 the rapper appeared in the reality TV dating game show Donald J Trump present The Ultimate Merger, Cross Rhythms were intrigued to learn about Eddy's view of the President Elect. Here's what he told us.

Tony: What is your political persuasion? Do you vote Republican?

Rawsrvnt: Probably historically, but I'm not beholden to any particular political party. I prefer to cast my vote for the people and policies I think best align with the ways of Jesus.

Tony: What were the circumstances that led up to you being invited to appear in The Ultimate Merger?

Rawsrvnt: God bless the Internet. Mr. Trump's production team found me online when they were trying to book that show. I guess the fact that I was (then) a single, Christian man who fully embraced my hip hop roots made me somewhat unique among the cast of other bachelors.

Tony: Up until recent times we Brits knew little or nothing about Donald Trump other than that he was a millionaire businessman. How aware of him were you? Had you watched any of The Apprentice series, for instance?

Rawsrvnt: I've known about Trump for years. He lives a few blocks down the road from where I currently live but he has been in my city as far back as I can remember. Of course, I've tuned in to The Apprentice, played his golf courses, etc. He's definitely a big figure here in Florida and beyond.

Tony: Before or during The Ultimate Merger did you get a chance to meet Donald Trump himself?

Rawsrvnt: We actually met in New York at Trump Towers for the show's premiere. That was a really cool experience.

Tony: It seems that Omarosa (the lady seeking a date on The Ultimate Merger) is a pretty controversial figure in her own right. Would you say your meeting and interview with her went well and what impression did you get of the lady?

Rawsrvnt: She is definitely brash. No doubt about that - but that's only on camera. She's really a sweetheart and we've become friends even after the filming ended.

My goal going into it was to show the world how a single, godly man approaches dating and treats women with respect. Even if I didn't make it to the final round I believe my interactions with Omarosa and the other guys accomplished that.

Tony: During Mr Trump's campaign he made many controversial statements. What was your response to those statements?

I agree with you, Eddie!

For more on Rawsrvnt visit the Rawsrvnt artist profile