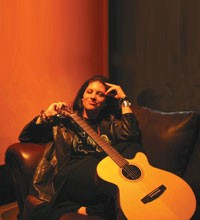 On a recent UK visit, sitting on a stool on a small stage after hours at Spring Harvest, Reana is captivating her audience, even though mostly she is singing to backing tracks. She tells stories, she is perfectly natural and occasionally she weaves in a little humour. The seated audience clearly love her warm approach and her powerful voice explodes out of the speakers whether she is singing a ballad or the rocking opener "Feed Me".

After meeting Reana at Spring Harvest in Skegness, the one word that strikes me as adequate to describe her is sassy! She has confidence and attitude, a desire to communicate her faith and above all of that, she has talent. Entering a Pop Idol-style programme in South Africa, she swept to prominence as the votes poured in and week after week she won the show. Talking about it she deadpans, "Yes, I've been in a competition. People voted for my music and I won it. I got the chance to make an album, which I'm really grateful for. It did well enough so that I made a second album, which I'm more grateful for! Yeah, I'm able to share it with the world." Simple as that!

The best songs from those two albums have been combined to give Reana a worldwide release 'The Cure' which mixes gentle ballads with guitar-driven pop. Brought up in a religious family, Reana was 17 before she made a personal commitment to Christ. She remembers, "I really got the revelation of the fact I'm not a slave. He's my Father and we can actually have a true relationship, a verbal one. We can speak to each other, we can chat and we can relax with each other. That was so much more than I ever thought being a Christian was. So walking into that, it's great. Being a Christian is really much more than going to church on Sunday. It's a lifestyle and I wouldn't want to be without that. You can only go so far on a second-hand revelation. You need to have the first-hand revelation of who God is, a higher view of God. Because when the bad times come, you hold onto that, you know in your own heart that God is God."

It hasn't been all smooth sailing for Reana even though she won a national contest - the circumstances of recording her debut album were difficult. Rather than having money thrown at her, she left home in Namibia to move to South Africa to record. Friendless and nearly penniless, she remembers, "I didn't have food, I ate Weetabix for a whole two months because I didn't have food. And in those times, God just carried me and provided every single day!

My car's been hit so many times and I've been broken into so many times and I've almost been mugged! There are so many things that have happened in my life and every time, God just came through for me as a Father. My father is about 2,400kms away from me and who do I rely on?! My heavenly Father because he's my 'dad'."

The album is an interesting mix of pop and worship. A lot of the songs stem from Reana's real life experiences. Even her version of "Jesus Be The Centre"! "I was standing at one concert," she recalls, "and I tried to sing a song. It was as if the Devil was just shutting my throat. I couldn't get the sounds out, I couldn't get it out! I just started crying in front of 1,500 people. I was just saying, 'Lord, what's happening?!' I prayed and then we sang 'Jesus Be My Centre' and I've never felt anything like that. Just the calmness of God coming over me saying 'I am your centre. I am the root of you. If it's about me, I will glorify it, I will be in it.' And it was just wonderful." The song has become something of a signature song for Reana; she confesses "It's a deep song in my heart."

One of the most powerful songs on the album, the soulful rocker "Feed Me" was actually written on the beach! "It was one December holiday," she remembers, "and we started making up songs, as we usually do! These words came up, 'Love me, don't you forget me/Feed me, with God the Gospel/Change me, just like you want to/Yeah, Jesus Christ.' It was so amazing how I could sing those words to the German kids on the beach and they were just listening to them.not saved.and they really liked the song. They're singing along and they don't even know what they're saying! They're actually singing, 'God, change me the way you want to.' I was just amazed and I was like, 'Woah, go!' So we played that song because we didn't have petrol money to get back home! We busked on the street and we actually made enough money to get back home! So it was wonderful!"

From humble beginnings Reana has already demonstrated both her songwriting and singing talents but 'The Cure' is only the beginning. Grounded, with a real faith and a desire to pursue God, Reana is surely destined for bigger things.

she have something more, something different i've never seen before.

she is so coll

For more on Reana visit the Reana artist profile