The previous album by REBECCA ST JAMES, the ground breaking 'God', was considered by many a classic. She has followed that up with a Christmas offering as Tony Cummings reports. 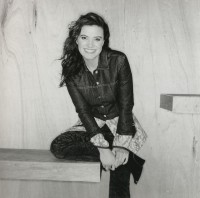 Let's face it, Christmas music, even that perpetuated each year by a Christian music industry, is often sold-by-the-yard muzak where over-recorded carols and painful Santa songs are cobbled together in annual bouts of sentimentality. So if the news that Rebecca St James had recorded a Christmas album was hardly surprising, the 20-year-old Australian is now one of America's top CCM sellers, it was not exactly jumping up and down news either. But those fearing Rebecca's 'Christmas' album would be a dire disappointment after the fine 'God' set will be encouraged once they hear it. There are not even any sleigh bells. "Though I really had to fight to stop them putting sleigh bells on one track," Rebecca laughed. What producer Todd T has concocted instead is a set of arrangements where there's funky programming and grunge-tinged guitars that have the same contemporary bite that made 'God' so compelling. Many people, me included, considered 'God' a CCM classic though a couple of reviewers slated it for being way too close to the sound of mainstream megastar Alanis Morisette. "Those reviews hurt my feelings," admitted Rebecca, "especially as I'm not the kind of singer who listens much to other people's music. I haven't got piles of CDs at home. I suppose criticisms like that come about because people are always trying to put you in a box. And it's easy to think of a big name and say 'he or she sounds like that'."

Certainly in America the huge CCM audience responded warmly to 'God' and changed popular perception of the Sydney-born singer as a purveyor of dance-tinged pop froth to a singer of serious spiritual songs with plenty of musical street grit. With her name at the top of the best seller list for seven months it also gave her such profile that when the world's most prestigious Christian magazine, Christianity Today, ran a special profiling 'The Top 50 Evangelical Leaders Under The Age Of 40' Rebecca, along with dc Talk, were the only musicians to be named. The young singer has become a role model for American teens and a favourite among Christian parents who hope their kids will latch on to Rebecca's challenging Christian message. "I don't think of myself as a role model," she said. "Some people have asked me if I feel pressure to live up to some image that has been given to me of myself, but I don't. I want to be accountable to the people closest to me and to God. I want to please him with every part of my life. I want to be the same whether I'm on stage or off and a woman after God's own heart."

Why, I asked Rebecca, did she decide to record a Christmas album? Wasn't she aware how many naff Christmas albums there are out there? "Yes, I know what you mean," she giggled. "But really I sensed it was something God would have us do. I was in the middle of the It's All About God tour and when my producer (Tedd T) began bringing me the tracks, I really felt God's hand at work." Many of the vocals on 'Christmas' were actually recorded on the tour bus (the kind of thing you can do these days, thanks to ADAT recording). The choice of songs was crucial. Perennial carols like "Sweet Little Jesus Boy" and "Silent Night" rub shoulders with a startling transformation of John Lennon's "Happy Christmas" and a revisit to an old David Meece Christmas tune, "One Small Child", made into a full tilt rocker. Throughout, the album eschews the sentimentality of many a Christmas album for a Christ-centred heart. And its style is defiantly contemporary." It's a pop/rock/alternative styled album." Rebecca described. "As we've worked on it we've had two mottoes. First, 'pray for everything'. We really seek to be inspired by God and that's ultimately what it's all about. The second one is "everything everyone else wouldn't do on a Christmas album - try." We really like to break the rules and do things differently."

With 'Christmas' in the shops Rebecca is now locked into a heavy promotional push before she gets to enjoy the season herself.