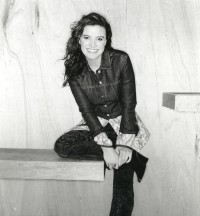 You've done a lot of touring in the UK. Give me three words to describe Britian.
Green Beautiful Artistic

If God took you to Heaven tomorrow what would be the first thing you'd say to Him?
Can I sit on your lap and have a hug?

When was the last time you really got angry and screamed at someone?
It was probably a long time ago but, you know what, I'm sure it was with one of my brothers.

Do you read all of your record reviews?
Not all of them come to me, but I definitely read some of them.

Do they wind you up?
Mmm. I've mostly had pretty positive ones but, yes, if I think they're unfair and compare me with other artists like I'm trying to rip them off, that does get me wound up.

Other than your salvation' what's your most treasured possession?
Probably my family.

What about an object?
Gosh, it's a toss up between my photo album and a book my mum has written - a whole bunch of stories about my childhood, from when I was a baby 'til 21.

What's the last album you bought?
I don't really but albums very much. The last album that I really sought out - I didn't actually have you buy it though. I asked a friend for it. I'd heard a bit of it and thought 'This is amazing'. A Christian album called 'Kaleidoscope Superior' by Earthsuit.

Can you explain the difference between Vegemite and Marmite?
Vegemite is saltier and has a bit of a tang to it. Marmite is a little more subtle.

Have you ever found an American who likes Vegemite?
Not many! Few and far between.

Of all the recordings you've made so far, what is YOUR favourite?
'God' has historically been my favourite album. But I really like this new one too but I'm still adjusting to it because it's brand new.

What's the most revolting food that's ever been put before you?
Lamb's brains. My nanna cooked it for us one time when we were living in Sydney. Oh it was disgusting!

What's the smallest crowd you've ever played to?
I think about eight people but it was a Sunday school youth group kind of thing before my first album came out. I was 14 or 15.