Rebecca St James: The Australian singer now based in Nashville

17-year-old REBECCA ST JAMES may be one of Christian music's youngest chart makers, yet this new singer from Australia has already impressed many with her natural warmth and her effective communication of her love for Christ. Jan Willem Vink reports. 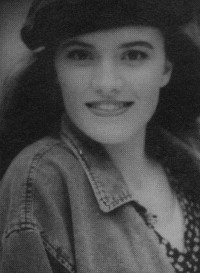 The daughter of an Australian Christian music promoter, Rebecca St James grew up the eldest of seven children in a house where hearing and singing Christian music was as natural as breathing. "I grew up with a lot of Christian music... We listened to early Petra stuff, early Carman stuff. Music was always around our house." Travelling on her father's tours gave Rebecca the chance to see many top name acts and Rebecca, infected with the 'artist virus' started writing songs on her own. She progressed from self-written and produced childhood skits for her mom and dad to fronting a Christian band at the age of 13.

Rebecca was heavily influenced by the Youth Alive conferences, a main part of the Australian praise and worship scene. Here, thousands of young people would come together to praise the Lord with rock-orientated music. Some of these events have been recorded on CD.

While performing a stint as an energetic, pop-influenced lead vocalist of a Christian band at her school, a major opportunity came for her in 1991. Carman planned a tour of Australia and Rebecca was tapped to open for the artist she grew up enjoying. "I experienced what a joy it was to help people praise God. I love to help people praise God and to praise God with them. God is so awesome, so big, we can't even imagine! I mean he created this world. God just blows me away!"

Then, Rebecca's father got an opportunity to work in the Christian music industry of the States and moved his whole family, only to find that he hadn't got the job he was promised once he arrived in Nashville! The St James family were left with no income, no furniture, no car and nine mouths to feed. This laid a profound foundation for the family as they learned the value of prayer, trusting the Lord to provide.

"There have been so many times these last few years," Rebecca comments, "when my entire family have laid ourselves entirely on God in prayer. And he's always met our needs - abundantly!" One afternoon, after the family had been praying about their need for a car, a man they'd only met that day handed Rebecca's parents the key to his brand new van. Truckloads of furniture were dropped at their house, people gave them bags full of groceries and cheques came in the mail when the money had run out.

"In Australia," Rebecca says, "I think we took prayer for granted. All our needs were met before we went to the Lord. But we've since learned that when you get out on the edge with Jesus and learn to trust him, you can see him working in and through your life. It's been incredible to get that perspective."

Coming from Australia gave Rebecca a slightly different perspective on her faith in comparison with most Americans. "In Australia," continues Rebecca, "it's really black and white. If you're a believer in Christ, people ask you why you go to church. But in Nashville, people ask what church you go to. That was such a shock when we came here."

After signing with Forefront, her record company brought in some big people to help her on her debut album. With Bill Deaton as producer and Brown Bannister as executive producer it was no wonder comparisons were made with another female singer who started at a young age and attracted people with her natural style of communication. Yet Rebecca's music is different from Amy Grant, with a funkier feel, added to the strong pop sound. "I want at definite points to say what God wants me to say in a song," says Rebecca about songwriting. "I try to be really open to what he's laying on my heart. I am very committed to having Biblically-based, vertical meaning like a prayer - music that the family can listen to."

On her debut album Rebecca co-wrote four songs. While the irresistible "Little Bit Of Love" began with a very human experience, it evolved into an uplifting expression of the power of God's love when shared among his people. "I wrote the chorus to that song when I was 13," remembers Rebecca. "I was inspired by my little brother. He had started a new school and came home crying one day because he didn't have any friends. I gave him a hug and a kiss and he felt fine and went off to play. That showed me that a little bit of love goes a long, long way. God gives us his love for the purpose of giving it away to others."

Rebecca's activities as a singer are not the fulfilment of a lifelong dream. "I think I've known ever since I was little that I could possibly do this, but it hasn't been a dream," comments Rebecca. "I want to marry and be a mother. I enjoy being a part of a big family and I want that to be an important part of my life too." Yet under girding the young singer is a desire to be used by God.

"My heart is to serve the Church, youth groups and the people in my life," says Rebecca. "As a teenager, I am seeing what is happening to (my) age group. With AIDS, drugs and guns - all the violence - the world is falling apart. I really feel that we are becoming a selfish society. Everything is a convenience. Everything is 'me'. It's a selfish attitude. I think as a Christian we learn that (selfishness) is not the way to go. We need to be telling people my age that God has the answers for the world. To live a Christian life, to live a servant life - that is the most fulfilling and happiest thing."

Those who prefer a more dancy sound to the strong pop hooks of Rebecca's debut will want to check out the 'Rebecca St James Remixes' that Forefront/Alliance have just released. Rebecca is currently in the studio, working on a new album, due to be released in the first quarter of 1996. Producer of this album is Tedd T, who also did the production on the remix single. Many are predicting that the best is still to come.