About to visit the UK, REBECCA ST JAMES talks about her new live worship project, playing a hooker in Hero and resisting the lies of our modern culture. 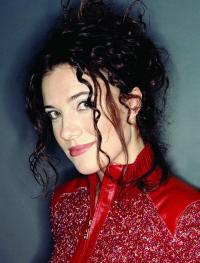 Before embarking on her European tour Rebecca St James gave the following interview.

Rebecca, tell us a little capsule on your "Live Worship" project just released in the U.S.

RSJ: "Well, it contains eight songs-one of them-"Power Of Your Love"-- is brand new, recorded in the studio as a bonus track. The others are songs that are very close to my heart-two of which are brand new. These two are a song called "Blessed Be Your Name" which Matt Redman wrote and which is a song I love worshipping God to-and the other is a song I wrote several years ago called "I Adore You,' which we decided to record on this project. It was really neat being there on that night recording that song live because it was the first time that I ever heard a crowd sing along with me on it-it was only the second time I had played it with my band and when I taught it to the audience-they just sang with all their hearts-as you will hear on the track! It's a beautiful thing to have the experience of God birthing a song in your heart and then hearing an audience using that song to worship God too!"

Have fans asked you for a concert album through the years? How did this project come about?

RSJ: "I've had over the years a lot of people come up to me at concerts and say 'when are you going to do a live worship album?' and things like 'a live worship album seems like such a natural thing for you since worship is such a big part of your concerts.' So yes...I have been often asked! I think also growing up in Australia where we've had kind of a 'live worship revolution' going on for nearly 20 years now greatly influenced me. I grew up around live worship, and listening to live worship CDs-my dad was even involved in some of the early Hillsong live worship albums-so I've always thought I'd like to do this one day. This album is fulfilling a part of my ministry that I've been hoping for. I think there's something very powerful about a listener being able to hear an audience sing together. The community and unity that represents provides a beautiful connection with the listener-similar to the feeling of when we're at church and worshiping corporately-you have a sense of brother and sisterhood from the experience. There's something special that happens through live worship projects-we're literally able to join hands with other Christians around the world in the experience. I hope this particular album will touch people in that kind of unique 'God' way."

Looks like you'll be in Europe quite a bit. What's the musical and ministry opportunities happening over there.

RSJ: "We've visited Europe quite often now and have a real passion for touring over there. I grew up in Australia which hardly ever gets any international performances. I know what it's like to live in a country where you read magazines and see all these tour dates-and I remember as a kid getting all excited with 'Oh...when is this tour coming to us!'...only to realize 'Oh it's only in America!' Or... 'how cool is this band!'...and again they were only touring in America! So I can relate to how so many young Christians feel in Europe. We have invested a lot of time in going to Europe-as well as to Australia and New Zealand and I feel very passionate about the importance of continuing that. I'm excited about going back to Europe! The audiences just lap up the music-they are just so excited that someone would come so far to play for them. The enthusiasm is just awesome. I'm looking forward especially to going back to countries like Austria and Germany-we've only been once each-and now getting to go back and establish a bit more of a relationship with the people there is going to be wonderful. I love Europe and only wish there was more time to really get to see each country and meet the people there on a one-on-one basis this time over."

Looking back now, you've just come back off another success concert run in April with "!Hero." How was your experience as part of the "!Hero" rock opera tour? What were the highlights? Did it stretch your skills as a performer?

RSJ: "The combination of acting and singing was a real joy for me-something I have wanted to do since I was very little-since I was 5 or 6 and saw 'The Sound Of Music' I've wanted to be in a musical! The acting in "!Hero" came very naturally for me-it didn't seemed forced it all-I felt very comfortable-and it was, as I said, a childhood dream come true. In the future if God lead me that way, I would really love to do more acting-maybe the combination of acting and singing again in a musical-I don't know but entering that world a little more would be awesome! I am doing '!Hero" again this spring and I'm very excited about that." 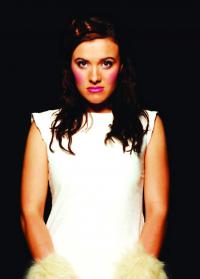 What prompted you to accept the role of Maggie/Mary Magdalene in "!Hero"?

RSJ: "I have been excited about this project for some time! Eddie DeGarmo played me some of the songs a couple of years ago and I loved the material immediately. When he offered me the part of Maggie, it was a no-brainer because I already felt such an attachment to the music and a heart for quite sometime about being a part of the rock musical concept."

Did you pray about this before accepting? If so, what were your thoughts?

RSJ: "I think I really felt like it was God giving me this opportunity...I don't think I ever doubted it was of Him. It's been an aim of mine forever to be a part of a musical. "!Hero" is very Biblical, straight along the lines of what I have always want to be in my ministry. I want to do things in my life that have spiritual value, spiritual content-things that give people hope and point them to God and His ways. This project is directly along those lines. Being a part of "!Hero" offers me an opportunity to do music that I love...plus I've had a passion for acting and that whole realm. So for many reasons I've really felt it was God providing this opportunity for me."

It's ironic that you promote abstinence so boldly, yet you will play the part of a worldly woman who has so many sins of the flesh. Has this part made you contemplate the plight of Mary (Maggie) and similar women?